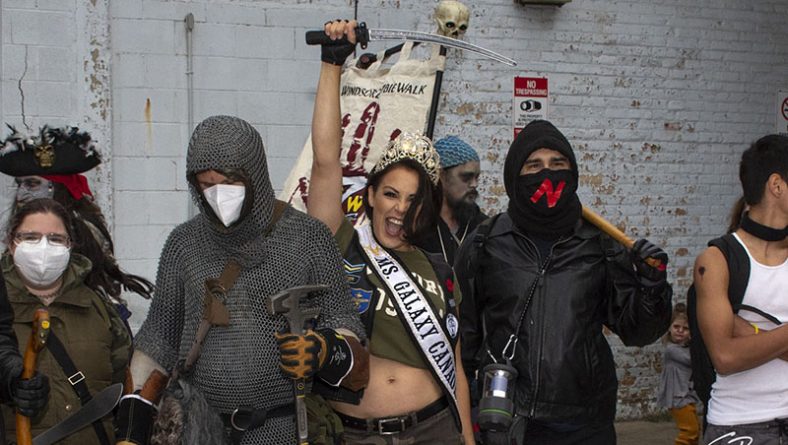 Windsor Zombie Walk returned to the streets of Windsor, led by celebrity guest survivor Ms. Galaxy Canada Natalie Bourgoin and followed behind by a horde of zombies, led by Zombie Pirate Captain Hindgrinder, all in support of the Downtown Mission and Windsor Youth Centre.

Participants who donated non-perishable food items or monetary donations were given free admission to presenting sponsor Scarehouse Windsor’s Zombie Maze attraction. In total ten boxes of food and $165 in cash was collected. 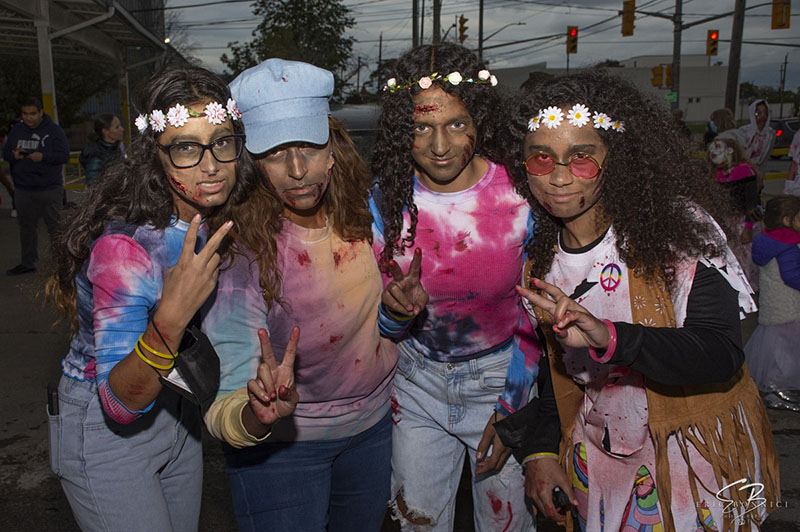 Last year the Windsor Zombie Walk wasn’t actually a walk but a scaled down indoor event due to the pandemic. However, organizers say the 2021 turn out tripled compared to the 2019 walk. After challenges organizing the walk over the years, the walk was moved from downtown Windsor to the streets around the Scarehouse Windsor area (1441 McDougall Ave.) That same year a new tradition was started by inviting a local “celebrity” walk leader. The tradition started with former Downtown Mission Executive Director, Rev. Ron Dunn. This year organizer reached out to recently crowned Ms. Galaxy Canada Natalie Bourgoin who graciously accepted the invitation to lead the walk this year. 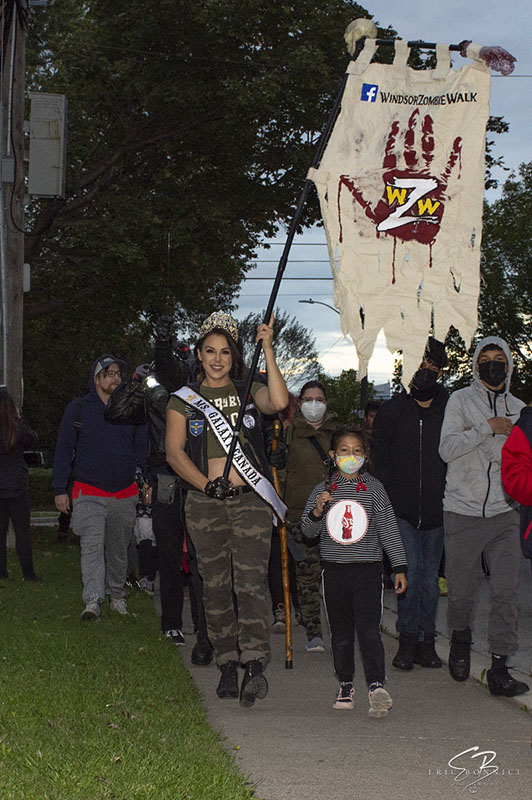 Natalie took on the role of apocalypse survivor. The survivor group leads the walk, followed behind by the group of zombies led by Micheal Reeve. For the past several years Reeve not only helps to organize the event but takes on the role of walk mascot Zombie Pirate Captain Hindgrinder. 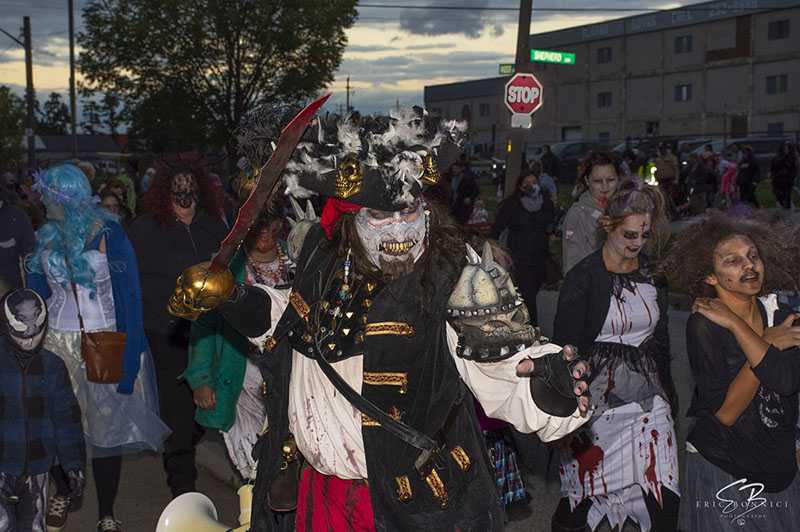 Micheal Reeve in the role of Windsor Zombie Walk mascot Pirate Captain Hindgrinder leading a group of zombies down Windsor Ave. in Windsor, ON, on Sat. Oct. 16, 2021. Photo by Eric Bonnici / Eyes On Windsor.

Windsor Zombie Walk holds a special place in Reeve’s heart. His involvement with Windsor Zombie Walk took the event in a family friendly community based direction. “Although there was always a food drive element involved, the previous organizer was targeting mainly the college/university crowd and the walk sponsors were mainly bars and nightclubs,“ says Reeve. He has been successfully attracting people of all ages including families with children over the past few years. He also added the Windsor Youth Centre, now under the umbrella of the Downtown Mission, as a benefactor of the event. “I was homeless in the past in Hamilton for about a year,” said Reeve. “I had a youth centre help me out so I wanted to give back to the community by giving to the Windsor Youth Centre. But now since the Windsor Youth Centre is married to the Downtown Mission it made things easier to focus everything towards one organization that envelops both. I owe a lot to a similar organization that helped keep me fed and clean, gave me what I needed to survive while I was in the situation that I was in, I wanted to give to an organization that does the same thing. One day there could be another Micheal out there who could need someone to help them out and get them on their feet in life.” 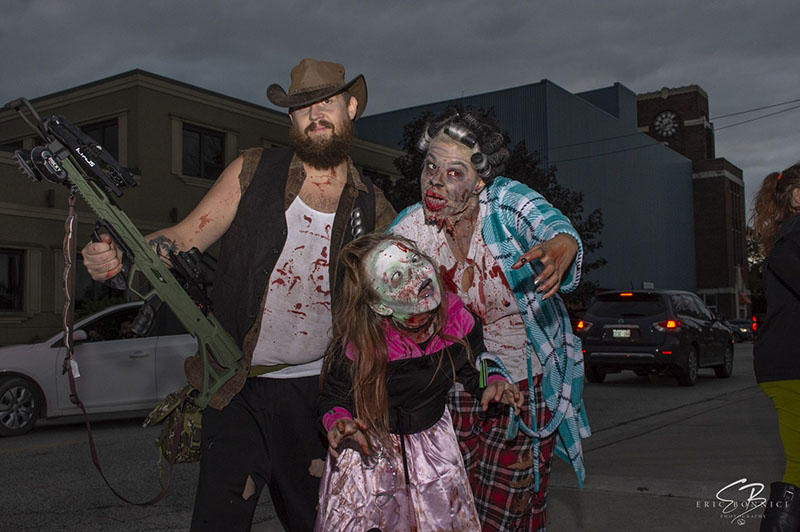 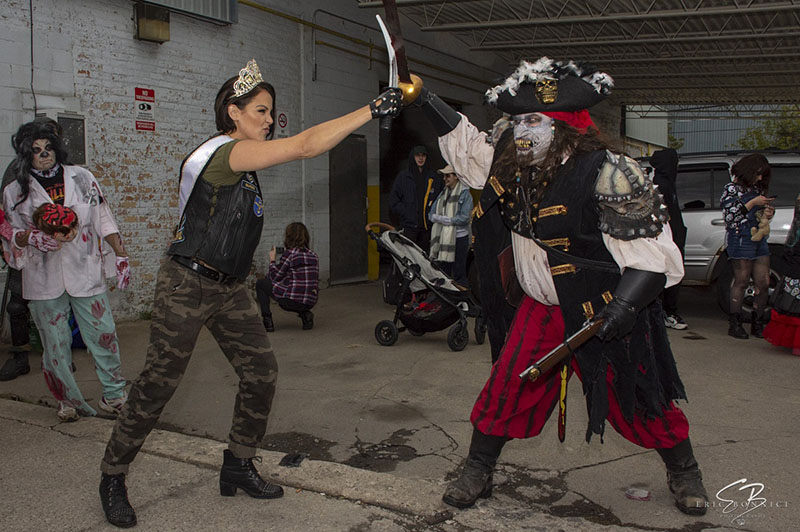 Organizers reached out to Natalie Bourgoin because they noticed she was heavily involved with activism. Specifically they saw a social media post in which she had helped raise funds for the Windsor Youth Centre. Natalie is not only Ms. Galaxy Canada but a mother of three, and a Canadian armed forces Veteran, so she is no stranger to acts of service to others. Among her long list of community endeavors is an annual sleeping bag drive she organizes for the homeless. She has been making many appearances and supporting local charity events. This weekend she will be supporting Easter Seals by making appearances at the “Spectacle” on Nov. 6 and 7. Spectacle is a three-day event featuring a mix of arts and crafts, attractions, entertainment, programs and events inclusive of real-life Canadian heroes, TV celebrities, sports heroes and other guests across a myriad of fandoms.

Organizers say Windsor Zombie Walk more than tripled in size this year compared to 2019 and hope to see an even bigger turn out next year.

Scarehouse Windsor Zombie Walk To Be Resurrected On City Streets