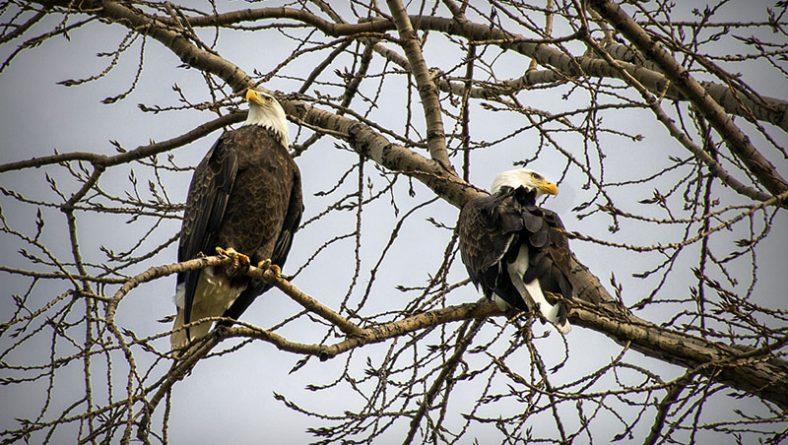 (A pair of bald eagles sitting in a tree along the Detroit River in Windsor Ontario’s Riverside neighbourhood on Nov. 13, 2020. Photo above by Eric Bonnici / Eyes On Windsor.)

Riverside residents have been graced by the presence of bald eagles in their neighbourhood. Eric Bonnici and his wife Theresa Shpak were shocked to observe 13 eagles in a tree nearby their home last winter. Eric, a local photographer, was determined to capture a photo of these majestic birds of prey along Riverside Drive. However, whenever attempts were made over the last year, even at a distance, they would fly away. Last week there was victory in capturing a digital image of a pair. 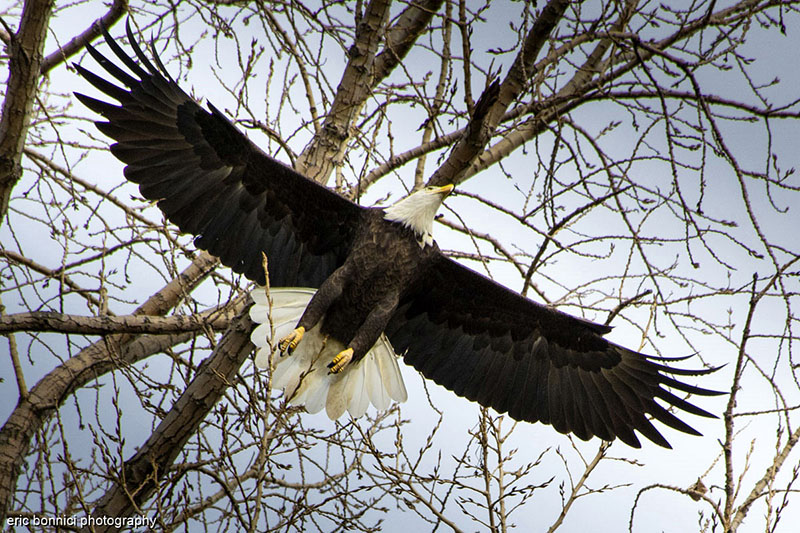 A bald eagle flying out of a tree along the Detroit River in Windsor, Ontario’s Riverside neighbourhood on Nov. 13, 2020. Photo by Eric Bonnici / Eyes On Windsor.

“I’m grateful to have gotten within a few hundred feet of these wild eagles a couple of times,” said Bonnici. “It’s so cool to see them soaring in the air, diving into the river after fish, or just sitting on the tree branch. When I was close shooting photos they flew out of the tree and over my head, I was amazed at how well I could see their huge wingspan (had to be 5 feet or more) and big powerful talons. At the same time I was a little scared because I know if one decided to swoop down and attack, their razor sharp talons would do major damage.”

These are among the images that were posted in the ‘Riverside Bulletin Board’ Facebook group, and one of the members came forward to launch an online event to submit name suggestions for the pair of eagles. There are over 80 suggestions submitted thus far. The public is encouraged to participate by submitting name suggestions (by end of day Dec 10th) and voting will commence on December 11th and end December 31st. On January 1, 2021, the winning name combination will be announced. 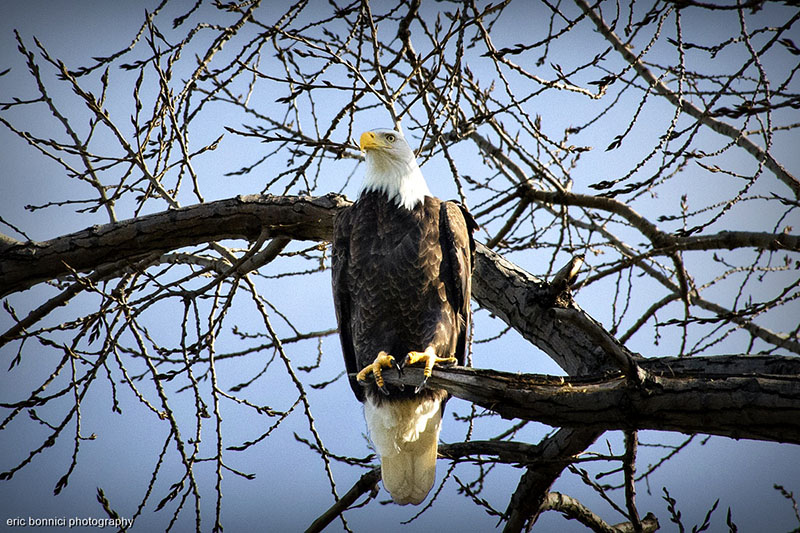 A bald eagle sitting in a tree along the Detroit River in Windsor, Ontario’s Riverside neighbourhood on Nov. 29, 2020. Photo by Eric Bonnici / Eyes On Windsor.

The Native American culture consider the bald eagle to be sacred, and a symbol of strength, wisdom, courage and hope. This is a welcome sight as the year 2020 has been challenging for many. It’s synchronistic that the winning names of the eagles will be announced as we ring in a new year. Humanity is offered an opportunity to see with the eyes of a new perspective; an eagle’s eye view. Though there may be struggles as we are immersed in them, it can also be witnessed that community is becoming more valued, as members of the Riverside community have extended their kindness to support their fellow neighbours in need. The year 2021 promises hope and new beginnings after gaining strength and wisdom.

For more information, to suggest names for the eagles, or to vote visit: https://yqgeagles.com 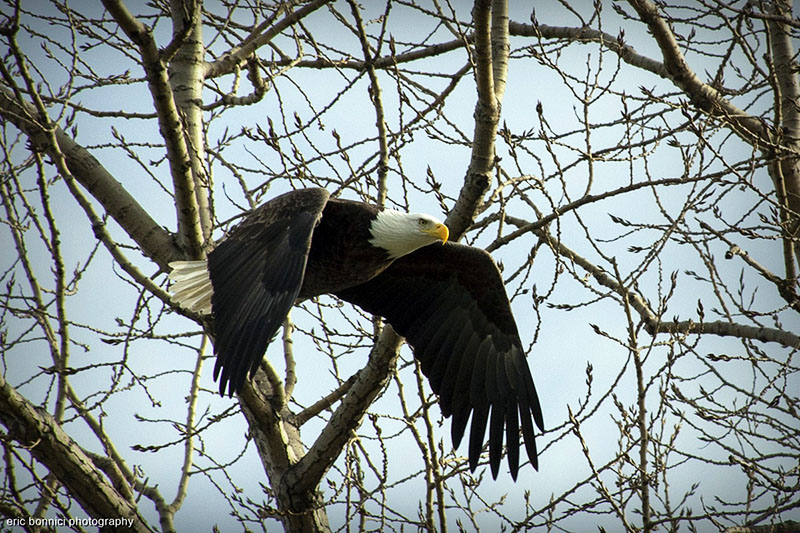 A bald eagle flying out of a tree along the Detroit River in Windsor, Ontario’s Riverside neighbourhood on Nov. 29, 2020. Photo by Eric Bonnici / Eyes On Windsor. 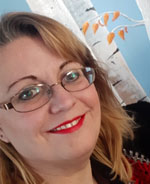 Lucie is a self-taught artist who works mainly with acrylic and coloured pencil. She also designs cross-stitch patterns using photographs. Her work has been showcased in various publications including on the covers of “City Crow” Magazine and “The Tranquil Planet.” She has illustrated over 20 children’s books. Her work has been exhibited in local and international galleries. Lucie is available for commissions and lessons in needlework design. https://luciebellerive.weebly.com