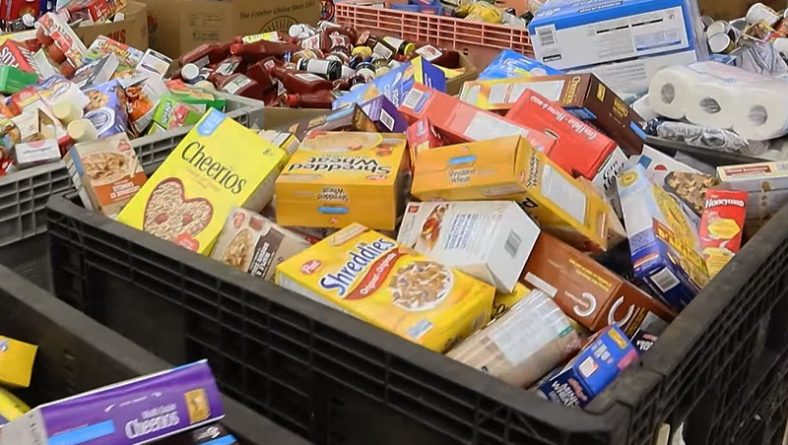 (Over one million pounds of food was collected during the 2021 June 27 Miracle food drive in Windsor Essex County. Screen shot capture above from video by Todd Shearon.)

Organizers and volunteers across the municipalities in Windsor-Essex, Ontario are again overwhelmed by their communities’ generosity after experiencing the “June 27th Miracle” food drive.

For a second year in a row, a group of Windsor-Essex citizens banded together to sound the alarm on the food insecurity in their region. Approximately 5,000 volunteers worked safely together – while physically distanced – at over 40 drop-off locations on a food drive that spanned an entire city and county. A significant portion of the volunteers worked in teams of family members or others in their social circle to cover over 1,800 square km by going home-to-home to pick up non-perishable food donations at many of the 185,000 houses and apartment buildings in the region.

Matt Hernandez, one of the members of the twelve-person organizing committee, says he is extremely proud of what they were able to accomplish in just a few short weeks. “Having been on the organizing committee last year, I knew we had a lot to do and that we needed a lot of help to get it done,” says Hernandez. Last year there were major hubs available for sorting and packaging the donations but this year posed new challenges as many of the large arenas and storage facilities weren’t available. “This year we had to rethink all of the logistics and distribution. We went with a decentralized approach and called on organizations to register with us to receive donations. Community leaders, municipalities, organizations and businesses came together and figured it all out. This enabled us to get the food in the hands of the people who needed it most right away,“ says Hernandez. “Windsor-Essex is a generous, hard-working community. Seeing how everyone came together to pull this off in just a few weeks really showed me what we’re capable of when we trust each other.” says Hernandez. “So many people gave in one way or another – time, expertise, leadership, equipment, facilities, signs, food, the list goes on. We are all in awe of everyone that played a part in making this miracle. The willingness to unite for a common goal like this is what makes Windsor-Essex such an inspiring place to live and work.”

This grass-roots initiative was planned and executed in just over three-weeks, starting with two members from last year’s organizing committee; they recruited others who were not connected to more than one or two others before coming together. They used their respective networks and expertise to engage over 5,000 volunteers from across the region, including several area captains to step up as leaders in their own communities. Close communication along the way with municipalities, businesses, and the Windsor-Essex County Food Bank Association, was crucial to The Miracle’s success.

Talya Natyshak, another member of the organizing committee, was a bit nervous when she joined the team and heard the audacious goal. “I had no idea how we were going to pull this off in three weeks.” says Natyshak. But as each day passed, the momentum took over and the energy swept through the community. “This was like a field of dreams moment. If you build it they will come. If you ask our community, they will come, they will get it done… and they did,” says Natyshak.

In the days following June 27th, an overwhelming feeling of pride, happiness and unity were being shared around the community. But this year community leaders, volunteers and organizations got to work right away, sorting and distributing the food in record time. Over 25 organizations were completely stocked up with food within days, others within the week. Hundreds of care packages were being delivered and picked up by people and families who reached out to us asking for help.

June Muir, President and CEO of the Windsor Essex Food Bank Association and the Unemployed Help Centre is thrilled with what the June 27th Miracle did for the community. “I want to make sure everyone knows what they did on June 27th is going to help our community in Windsor and Essex County, ” Muir says. “Donations were down a lot this year. A big thank you to the organizing committee for another successful year. It is no small task to organize this day. Our community came together again and made a miracle happen.”

Organizers have finished calculating a rough estimate of how much food was collected. At press time, the estimate is 1,032,199 lbs of food. Right now over half of the food has already been distributed to organizations in Windsor-Essex who know where the need is and can get the food to the people who need it most.

It’s difficult to quantify exactly how many mouths will be fed by the over 1 million pounds of food collected from the June 27th Miracle, but the Windsor Essex County Food Bank Association (WEFBA), which represents 15 food banks in the area, shared some of their metrics which allows a reasonable estimate of the impact to be made.

During the period of (April 1, 2020 – March 31, 2021), the Windsor Essex Food Bank Association served 166,044 of which the UHC served 115,219. This was an increase of 74% from the same period the year prior for the UHC – Hub of Opportunities, representing 8,849 households served in Windsor and Essex County (an increase of 73% more households from the year prior). The food from Miracle Day will help us provide food security for individuals and families living in Windsor and Essex County. Therefore, the estimated 1,032,199 lbs of non-perishable food collected from the June 27th Miracle, stands to feed approximately 15,000 households or 34,000 individuals for one year of food bank usage.

Windsor-Essex, like virtually every community around the globe, is facing an unprecedented global crisis. Food bank usage is at an all-time high while food bank donations are at all-time lows. With this as the backdrop and this initiative provided an opportunity to do good together, while apart. On Sunday, June 27th, a miracle took place in Windsor-Essex and is another perfect example of what can be accomplished when a community unites, trusts and marches toward a common goal together.