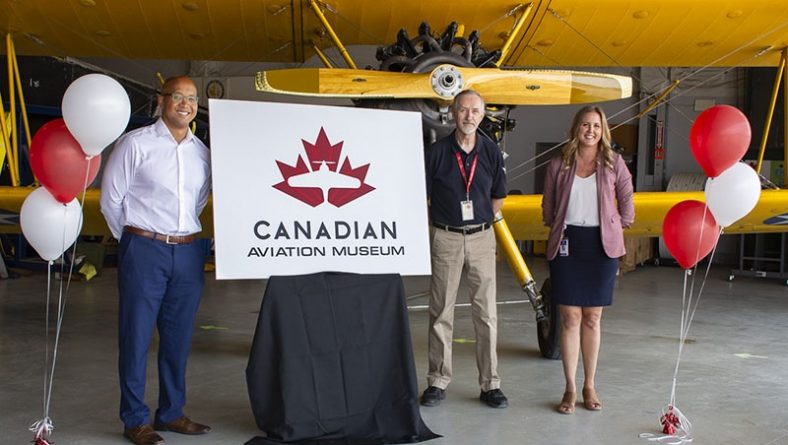 The Canadian Historical Aircraft Association CH2A Hangar, in collaboration with Generator Design, has rebranded as the Canadian Aviation Museum with their new logo literally taking flight on the wings of a Vans RV-14 aircraft at the world’s largest airshow that is happening this week.

Last Thursday the Canadian Historical Aircraft Association was thrilled to announce that the CH2A Hangar is now formally the Canadian Aviation Museum (CAM). The new brand refresh was generously created by local advertising and design agency, Generator Design. In 2019, CH2A won a Windsor-Essex wide contest by Generator, known as Generator Cares “Windup”, where each year one charity or non-profit organization was selected to receive professional advertising and design services ($15,000 value). The CH2A was nominated and through the support from members and the community, was voted one of the three finalists. All three finalists presented their case to Generator who awarded a winner.

“The Canadian Historical Aircraft Association doesn’t’ fall off the tongue very nicely,” explained Nicole Hutchinson, Canadian Aviation Museum, Treasurer, Marketing and Social Media Coordinator. “We wanted something that was more concise, clean and identifiable to the public. Association doesn’t make a lot of sense to a lot of people but museum does. The CH2A logo was perfect at the time but it’s now dated. We’ve grown since the aircraft shown in the logo, we’re not just about one project and new projects are coming all the time. So we wanted a look that reflected our growth and was also identifiably Canadian. So the objectives were to communicate the museum’s direction, Canadian identity and above all to be leaders in aviation history. I think this is what helped us win this process. We came up with something that really reflects this organization, the work that’s been done and the heart that is here.”

Jose Guzman, Generator Design, Founding Partner said, “we usually do it every year, we really like the impact the contest has on the community and helping businesses out. I think this is going to help the CH2A move forward with their goals including moving towards more of a museum and catering to the public.” 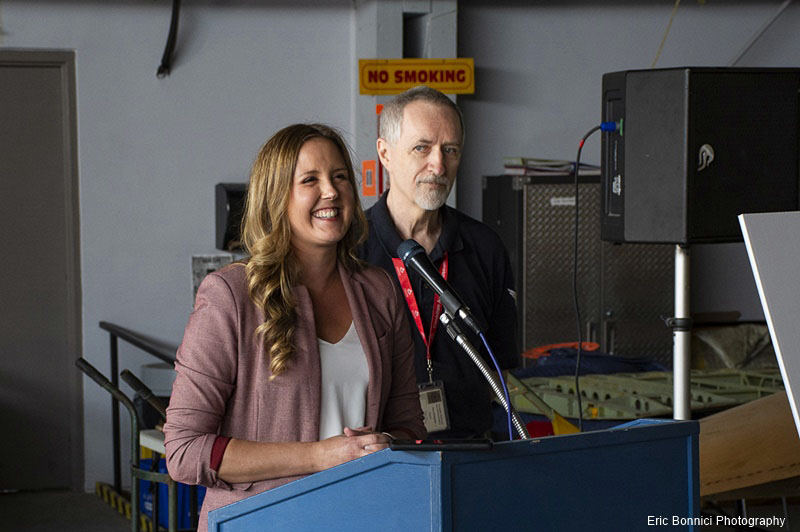 “There’s been an evolution and a lot of history in this building,” explained Don Christopher, president of the Canadian Aviation Museum. “We’re here today, the 22nd of July, because this is the 81st anniversary of when this building opened. It’s the second oldest building on the airport property. When it first opened over the course of four years 2400 young men became pilots when they started their training in this building. The program was such a success that the British Commonwealth, with seven months before the war ended, had more than enough pilots in their crew than they knew what to do with, so they closed the program down in 1945.”

“In 1994 Roy Patterson purchased the building and bequeathed it to what became known as the Canadian Historical Aircraft Association. By 2010 we had grown so much that we got a Trillium Grant and upgraded the hangar and the organization continued to evolve. The original idea was to honour Canadian Veterans by collecting, acquiring, restoring and flying vintage aircraft important to Canadian aviation history. That program has continued to the point where we’ve evolved even further.”

As the museum’s collection and projects continue to grow, the new name and logo reflect that momentum, dedication, and position as a leader in collecting, preserving, and maintaining artifacts and aircraft important to Canadian aviation and military history.

Pilot Steve Thorne, Director External Marketing, Canadian Aviation Museum has literally taken the museum’s new logo to the air this week on the wings of a Vans RV-14 aerobatic kit aircraft. Thorne is well known on YouTube for his Flight Chops channel. His channel features virtual ride alongs as he learns to fly and improve his skills on various planes. 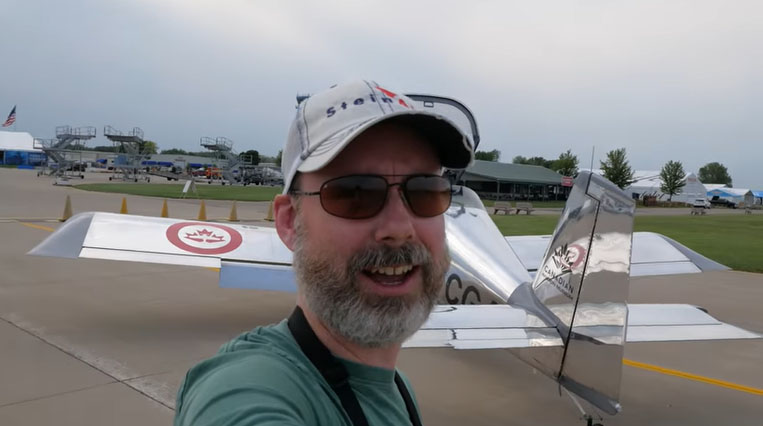 “Steve has a project with Vans Aviation and Garmin (a multinational technology company) to build a Vans RV-14 and the Canadian Aviation Museum became a big sponsor of that,” explained Nicole. “The project was built here, even during COVID, and was restricted to the two leads on the project being allowed in the hangar to build. They had a contract to finish building this plane for the Oshkosh weekend (Airventure Air Show).” Experimental Aircraft Association Airventure, the largest airshow in the world, takes place annually at Wittman Regional Airport in Oshkosh, Wisconsin. “They built the plane from scratch over two years. It was just finished last week, all the flying time and safety checks were done. He is now at Oshkosh, our new logo is now on that plane. When he comes back it’s going to be painted yellow, right now it’s silver, and it’s going to be his official plane.” When the RV-14 is at the hangar it will be viewable to the public.

One of the latest videos on the Flight Chops YouTube channel features flying of the RV-14, complete with the new Canadian Aviation Museum logo on the wings, to AirVenture 2021. It can be viewed at https://flightchops.com 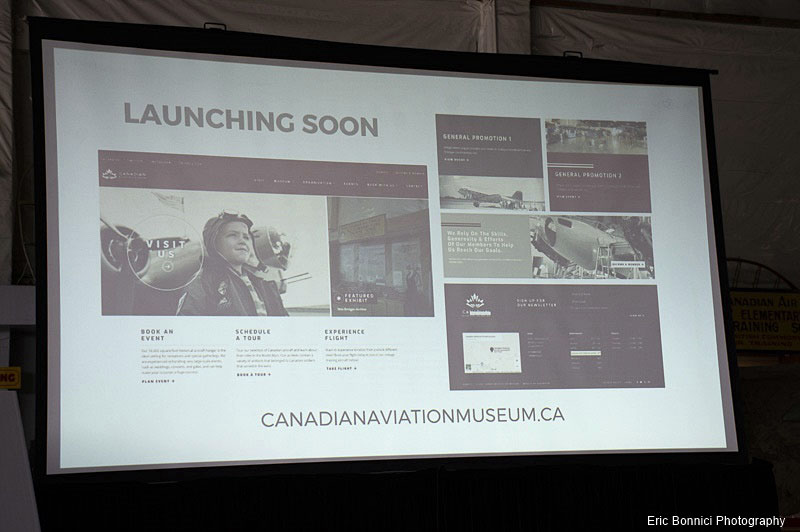 The new Canadian Aviation Museum website to launch soon was shown to the media on a projection screen at Windsor International Airport on July 22, 2021. Photo by Eric Bonnici / Eyes On Windsor.

The museum offers guided tours, chats with volunteers about their various projects, viewing of archives and aircraft. Simulators are also available but are the only attraction remaining closed at this time. After being closed because of the ongoing pandemic it just reopened to the public for regular summer hours this past Saturday, from 10:00am – 3:00pm, Tues. to Sat.