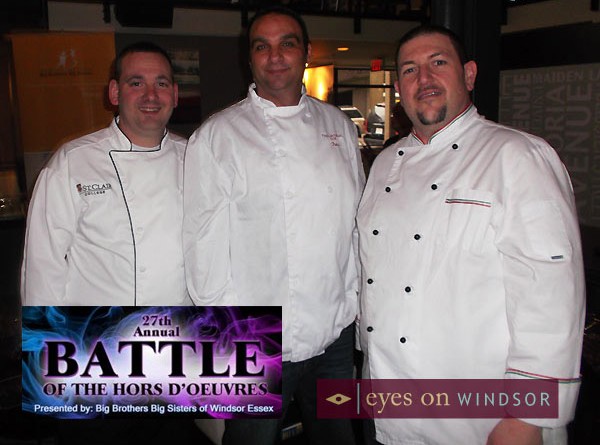 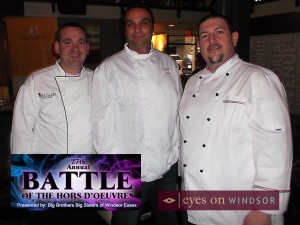 Chefs at The City Grill during the press conference announcing details for the Big Brother Big Sisters Windsor Essex’s Battle of the Hors D’oeuvres 2013. Pictured are Chefs Mike Jimmerfield from St. Clair Centre for the Arts, Pietro Aversa from the Fogolar Furlan Club, and Marco Malizia from Armandos Trattoria.

That’s right, it’s time for Battle of the Hors D’oeuvres 2013 and Windsor Essex County’s top chefs from fifteen of the best area restaurants and hospitality businesses want you to choose their savoury culinary creations as your favourite.

The 27th Annual Battle of the Hors D’oeuvres 2013 has been scheduled for Thursday May 23rd, 2013 at The St. Clair College Centre for the Arts.

The announcement was made on Wednesday April 10, 2013, at The City Grill restaurant in Downtown Windsor at a media conference by Big Brothers Big Sisters Windsor Essex the organizers of the Battle. Last year The City Grill was victorious taking home The Best Restaurant Award with their “Short Ribs Two Ways”, and the Canadian Italian Business and Professionals Association Centre (CIBPA) won The Best Hospitality/Epicurean Award with their “Polenta e Funghi”. The City Grill will be competing again this year while the CIBPA will not. However, Chef Marco Malizia who represented the CIBPA last year will be back, this time representing Armando’s.

This year you get to vote if The City Grill will be re-crowned as the People’s Choice Award winner or if the title should go to one of the other competitors. Restaurants trying to overthrow The City Grill include Armando’s Restaurant and Pizzeria, The Bull N’ Barrel Urban Saloon, Ciao Pasta Bar, and The Rye Gate Steakhouse and Lounge.

At the press conference Hayley Morgan (Development Officer BBBSWE) and John Sutton (Executive Director BBBSWE) discussed the tremendous success of last year’s event. Last year Battle of the Hors D’oeuvres was transformed from the traditional yearly gala banquet into a more casual and social lounge / networking type of event where guests can enjoy meeting and mingling with others. Of course plenty of seating will be available too. In addition, this unique food competition has become more popular while maintaining its loyal followers. The new “non-gala” format encourages guests to come as you are after work to lounge, network, and enjoy great food and drinks. So this year’s event, now being described as a casual indoor food and beverage festival, is expected to be bigger and better than ever!

The Battle of the Hors D’oeuvres pre-event will feature scrumptious hors d’oeuvres by Assumption College Catholic high school students with a cash bar available. Special guest Windsor Police Detective Brett Corey, will share his inspiring experience as a Big Brother. The main Battle of the Hors D’oeuvres will include live entertainment by Transeo, silent auctions, and raffles.