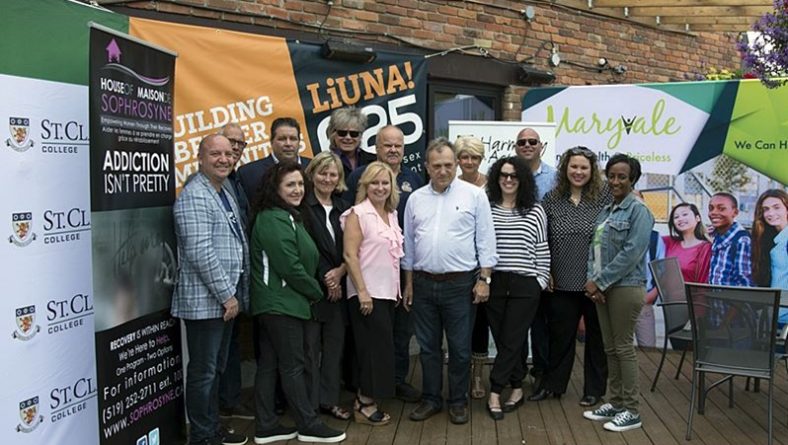 Organizers of Liuna 625’s 12th Annual 24 Hour Drum Marathon with Jeff Burrows announced the event, held on May 25 & 26, raised a record shattering $40,000 for local charities. The announcement was made at Good Time Charly on Tuesday, June 5, 2018.

“The big announcement is that this year we were able to shatter all of last year and previous years records,” stated Jeff Burrows. “I was really hoping to hit thirty plus thousand this year, but I’m happy to say we made it to $40,000.”

Burrows also announced the event may be turned into a national event; “We’re even considering looking at this to make it a national event, going from city to city, where it would be a 12 hour marathon, to save myself, and make Windsor our 24 hour marathon, in conjunction with the Canadian Mental Health Association.”

Jeff plans to hold the 24 Hour Drum Marathon for a total of twenty years. Next year is year thriteen. “I’m happy to say we’re going to keep the same benefactors for the next four more,” stated Burrows.

The event featured Jeff Burrows drumming for 24 hours straight with a long list of local and regional bands. The charities, each receiving $10,000 are the St. Clair College Scholarship Fund, Harmony In Action, House of Sophrosyne, and Maryvale Adolescent and Family Services. 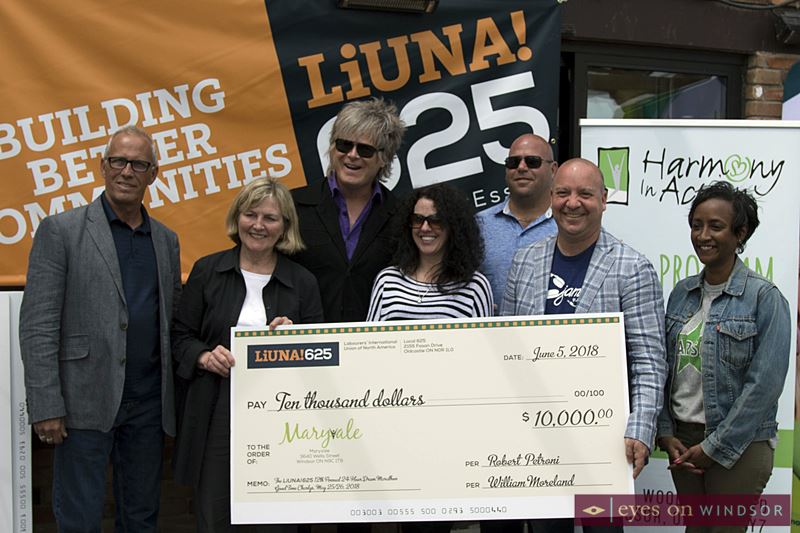 $10,000 being presented to Maryvale Adolescent and Family Services, which are part of proceeds raised during the 12th Annual Jeff Burrows Drum Marathon. Photo by Eric Bonnici / Eyes On Windsor.

The mental health of adolescents in the community will benefit. “We have a hundred kids waiting for counselling and this is going to take twelve of them off the list,” stated Connie Martin, Executive Director of Maryvale Adolescent and Family Services. 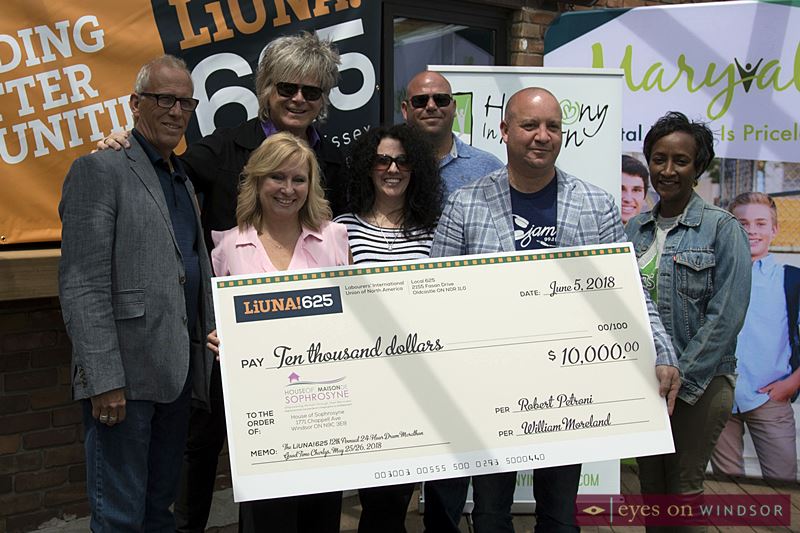 $10,000 being presented to House of Sophrosyne, which are part of proceeds raised during the 12th Annual Jeff Burrows Drum Marathon. Photo by Eric Bonnici / Eyes On Windsor.

The four year commitment by the drum marathon will help House of Sophrosyne, currently raising funds for a new facility, in achieving their goals. “Right now our community is in a crisis with addictions, so this money is going to help out immensely,” stated Karen Waddell, Executive Director House of Sophrosyne. To show their appreciation, Karen stated, “I’m proud to say that we’ll be able to hang the name of the Jeff Burrows Drumathon in our new facility.” The organization is reserving a room in their new facility which will be named after the event. 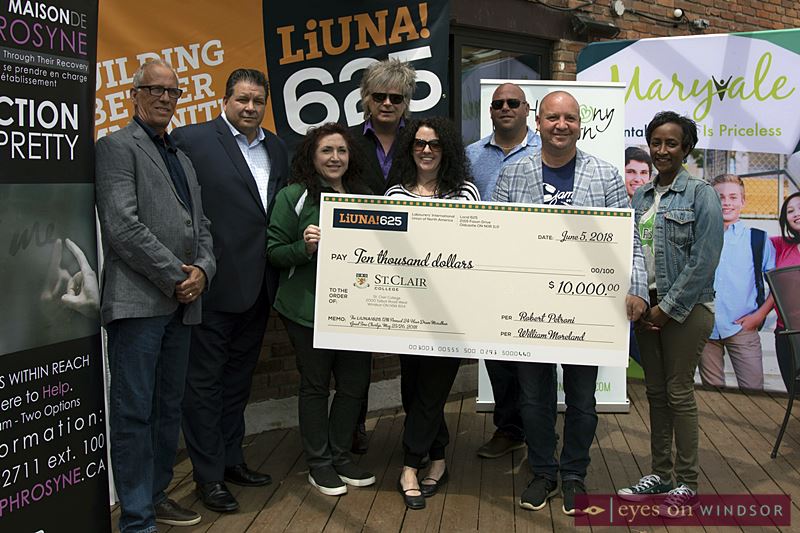 $10,000 being presented to the St. Clair College Scholarship Fund, which are part of proceeds raised during the 12th Annual Jeff Burrows Drum Marathon. Photo by Eric Bonnici / Eyes On Windsor.

St. Clair College Scholarship Fund will be able to help more students. “The funds that the college receives goes to our scholarship programs, it helps kids in financial need and those that are really struggling with the challenges of post secondary education and it’s cost,” stated Ron Seguin of St. Clair College. “So (the Drum Marathon) is a tradition that we really appreciate.” 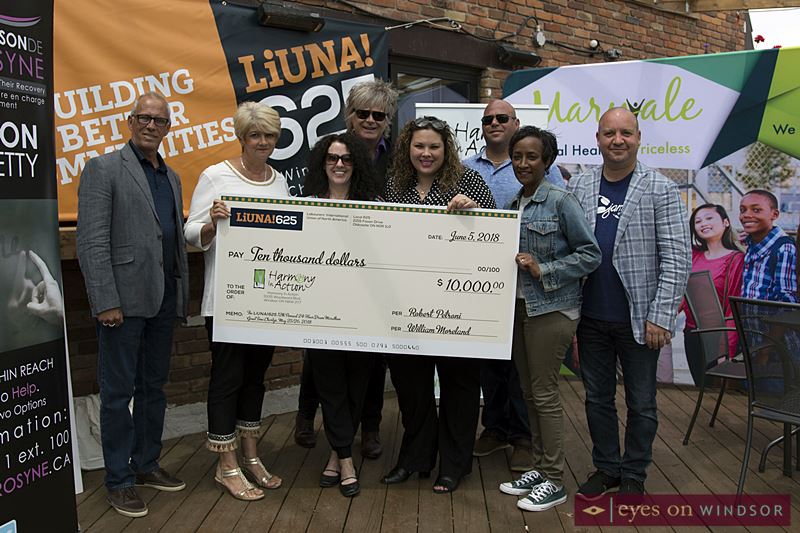 $10,000 being presented to Harmony In Action, which are part of proceeds raised during the 12th Annual Jeff Burrows Drum Marathon. Photo by Eric Bonnici / Eyes On Windsor.

“On behalf of Harmony, I’d like to thank everybody again for the $10,000 that we are receiving today,” Elizabeth Esposito, Executive Director, Harmony In Action. “We are in desperate need of a new handicap accessible van, the quote we received for the van is $90,000, so this is going in as a down payment towards our new van, thank you so much.” 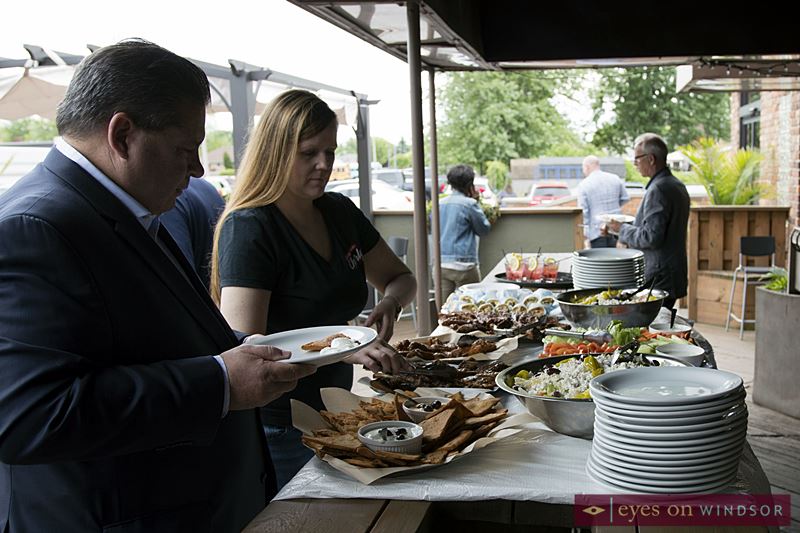 In addition, Costa and his staff at Good Time Charly treated everyone to some of their amazing food. We enjoyed ribs, chicken wings, Greek salad, gyros, and more! We highly recommend the food.

While Burrows is the face of the event he was grateful for everything Gary Demmanes does to help organize the event. “Gary Demmanes is esentially 51% of this whole machine, Gary does all the band selctions, puts everyone together and does all the organizing, he stays up longer than I do. He’s here from the very get go, until beyond when I’m gone. So Gary deserves as much kudos as anyone else in this entire operation.”

Eyes On Windsor popped into the Drum Marathon to see some of the bands including Sarah Smith (London), Dead River Kings (Windsor), and The Instinct (Chicago). Following the check presentations, we talked to Gary Demmanes and discovered that The Instinct, a band that blew everyone away during the drum marathon, has a Windsor connection. 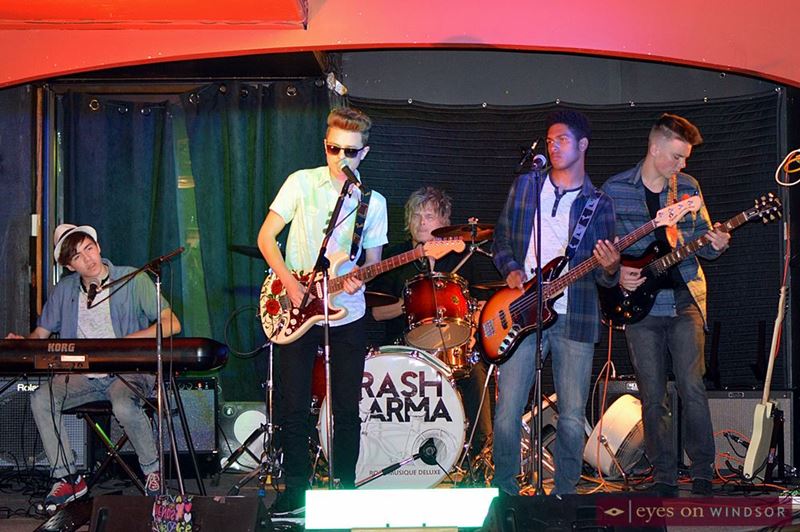 The Instinct Band, from Chicago, performing with Jeff Burrows during 24 Hour Drum Marathon at Good Time Charly on Saturday, May 26, 2018. Photo by Eric Bonnici / Eyes On Windsor.

In 2016, teen guitarist Grady Caplin, a native of Windsor, attended The Fernando Jones Blues Camp in Chicago, where he met several students and ended up forming The Instinct with them. Band members, Adem Dalipi, Donovan Lawnicki, Stacy Norris, Grady Caplin, and Aval Stanley Zaucha are only 14-17 years-old and have already found huge success. They recently won the 2018 Most Talented Teens Chicago Music Award. In January they were the youth representative for the Canada South Blues Museum at the International Blues Challenge in Memphis. This summer local music fans can see the band perform live at Bluesfest Windsor the Sunday night of the festival. 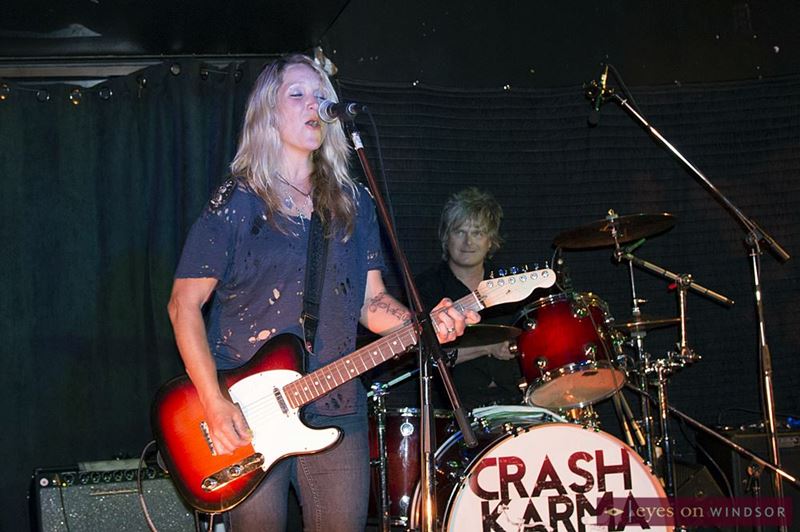 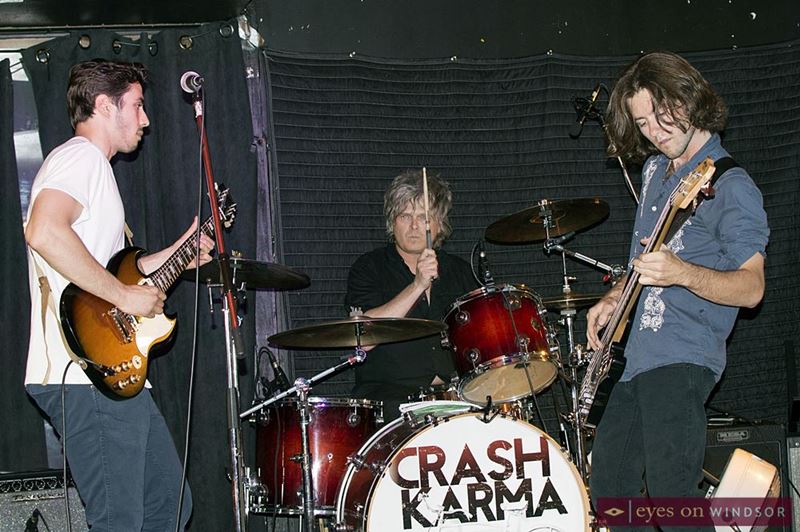 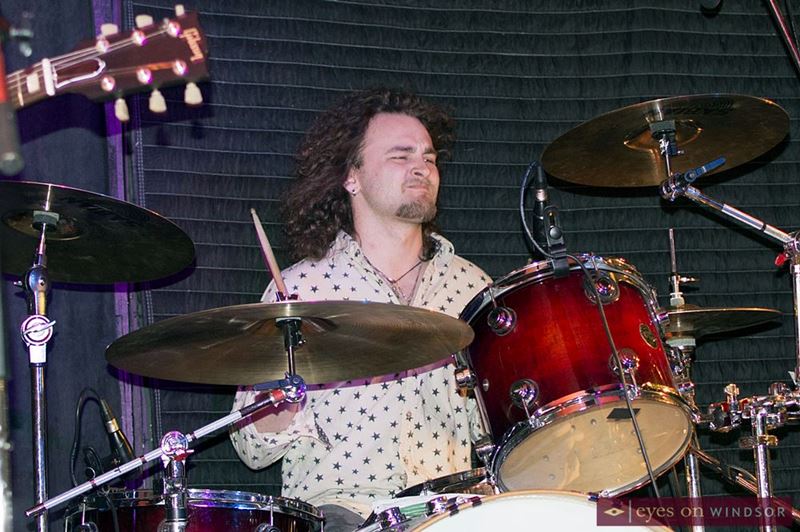 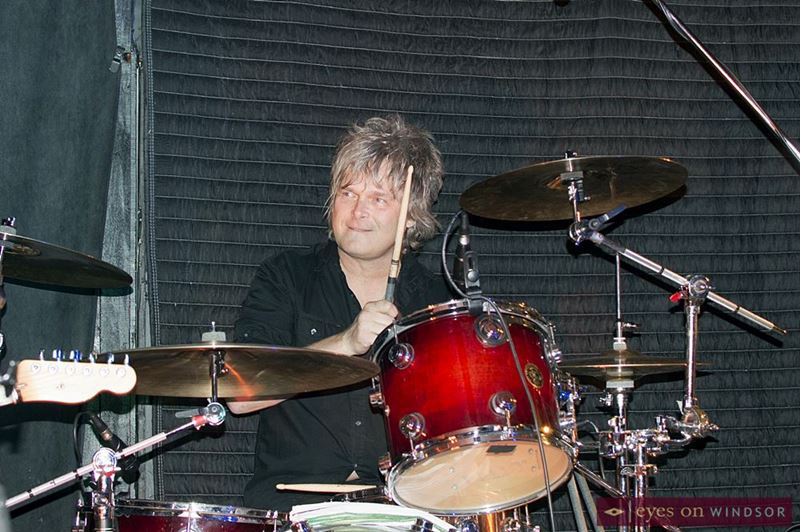 Jeff Burrows begins drumming for 24 Hour Straight at midnight on May 26, 2018. Photo by Eric Bonnici / Eyes On Windsor.