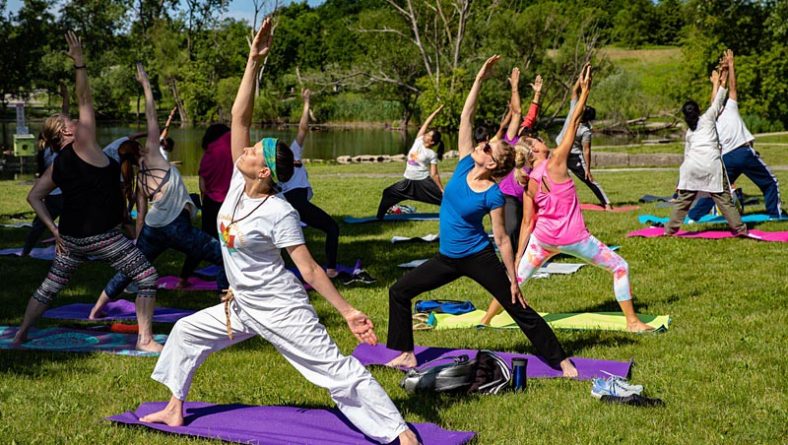 The 5th annual International Day of Yoga Celebration in Windsor was held at Malden Park on Saturday, June 22. The event was organized by Art of Living Foundation Windsor, Hindu Swayamsevak Sangh Windsor and Gujarati Samaj of Windsor.

International Day of Yoga was proposed in 2014 by by the current prime minister of India, Mr. Narendra Modi and is celebrated each year on June 21. June 21st, summer solstice, is the longest day in the northern hemisphere (shortest in the southern hemisphere). Also, In yogic perspective, second full moon after 21st June was the day when Shiva (First Yogi) begun profounding Knowledge of Yoga to humankind. 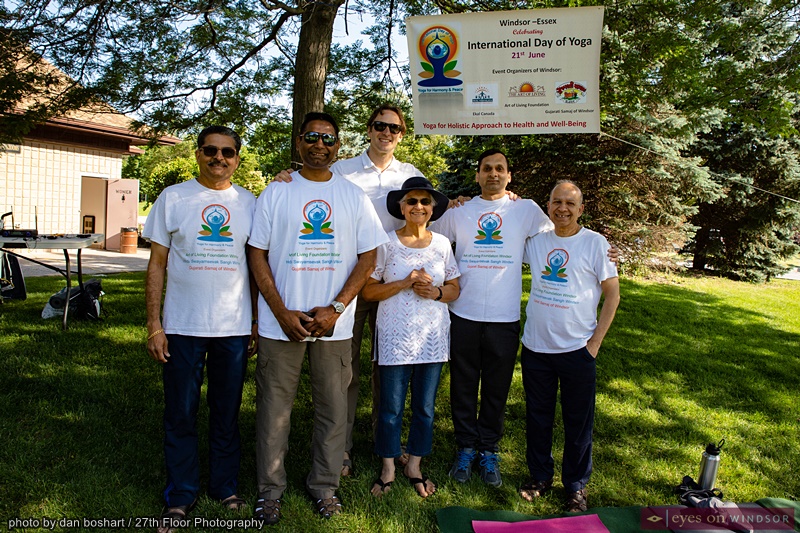 From left, Samir Thaker, president of GujaratiSamaj of Windsor, Rakesh Naidu, volunteer teacher with Art of Living Foundation, Spencer Delisle (in back), Indra Wadehra, director of Ekal Vidyalaya Foundation of Canada, Pankaj Borgaonkar, and Udit Shah, during International Day of Yoga in Windsor, Ontario, at Malden Park on June 22, 2019. Photo by Dan Boshart / Eyes On Windsor.

According to organizer Rakesh Naidu, volunteer teacher with the Art of Living Foundation, “more people are joining in and awareness is increasing in Windsor/Essex.”

“It’s great to see that people are recognizing how it can benefit you, not just on a physical level but how it can be used as a great tool for mental health. For holistic health it’s a great tool that can benefit every aspect of your life, professional, personal, physical and mental. The great thing about it is you don’t have to invest a lot into it other than time and the ability to sit down and dive into yourself. Work on the physical level then go deeper into the other level that we all have. There is no prerequisite to attend, whether you’ve done yoga or not. We walk them through less strenuous postures so everyone can do them and they’ll get an understanding of what it can do, how when you work a little bit on your body, how it can release the stresses, how your mind can be brought into the present moment and how you can sit and meditate.” 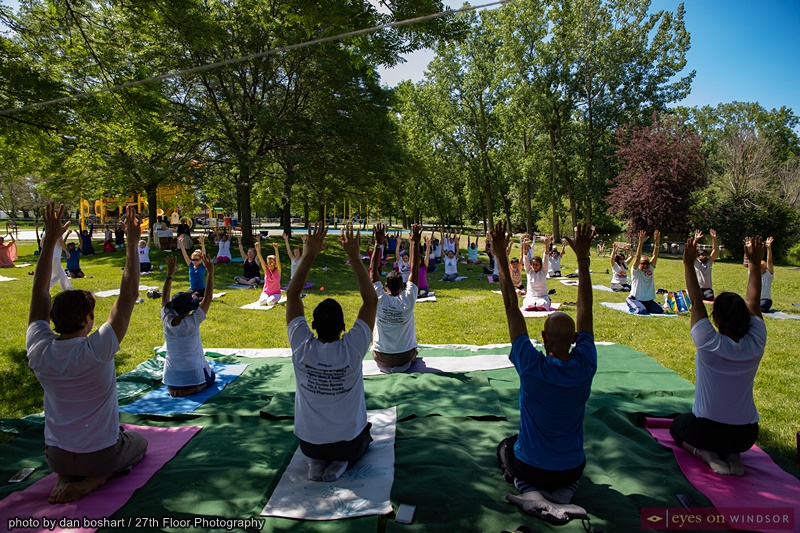 Samir Thaker, president of Gujarati Samaj of Windsor and one of the volunteer instructors says “it’s about bringing awareness of yoga as a regular practice that can benefit you in the long run, not a one day event.”

“You can see now that in the world all people are talking about mental health. Yoga was pioneered in India more than 5000 years ago and we’re just trying to bring knowledge to people of the benefits when you use it in your day to day life.” 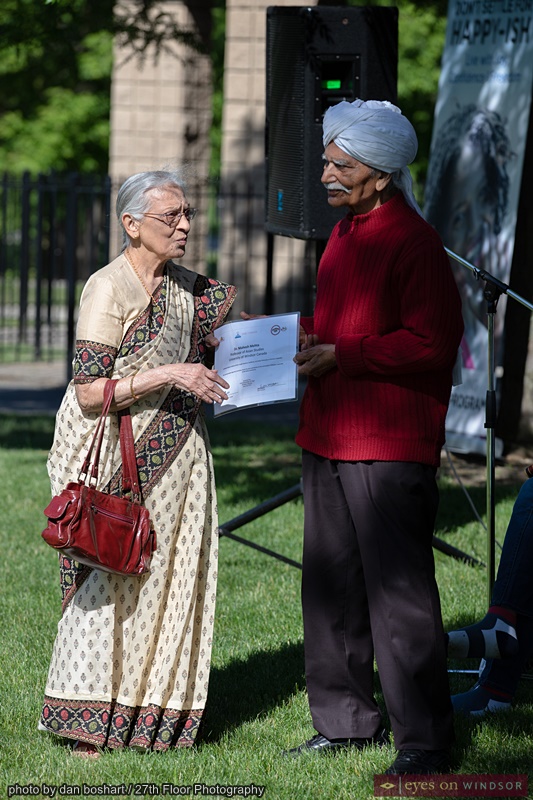 One of the participants was Gail Rushmere, owner and instructor at Windsor Yoga Club at the corner of Pillette and Tecumseh. Gail’s spiritual name is Jagadamba (mother of the universe). She came out because she feels it’s important to have a day where we celebrate yoga. “It’s what the world needs,” Gail explained. Gail has been practicing yoga for about ten years but it was traveling to India to study that totally changed her perspective on it. “When you go to a class for an hour and bend here and stretch there, you don’t really get the true meaning of it, it’s really hard to imbibe it into your life. At my studio my classes are typically a little longer because I talk more about yoga and how to bring it into your life other than just that hour that you go to bend and stretch. I was a network engineer before this, I worked in computers so it was high stress job and I’d never go back to it, that’s for sure.” 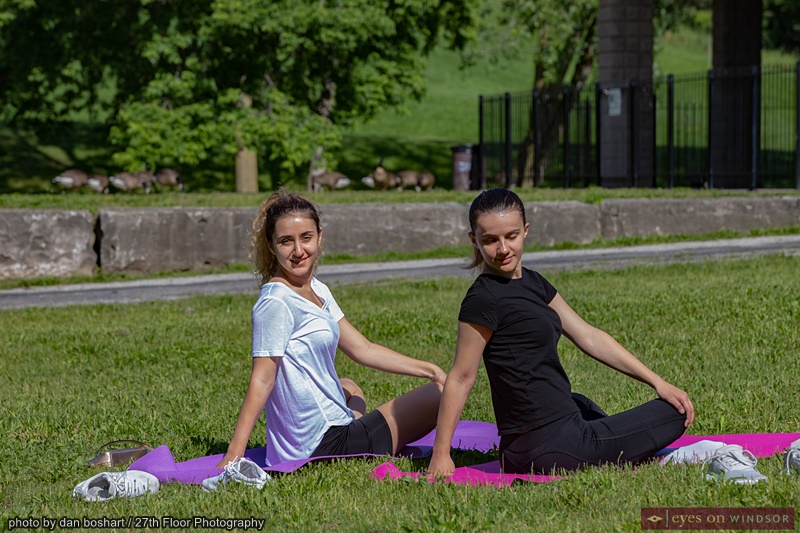 A pair of young ladies stretching during International Yoga Day in Windsor, Ontario, at Malden Park on June 22, 2019. Photo by Dan Boshart / Eyes On Windsor.

About International Day of Yoga 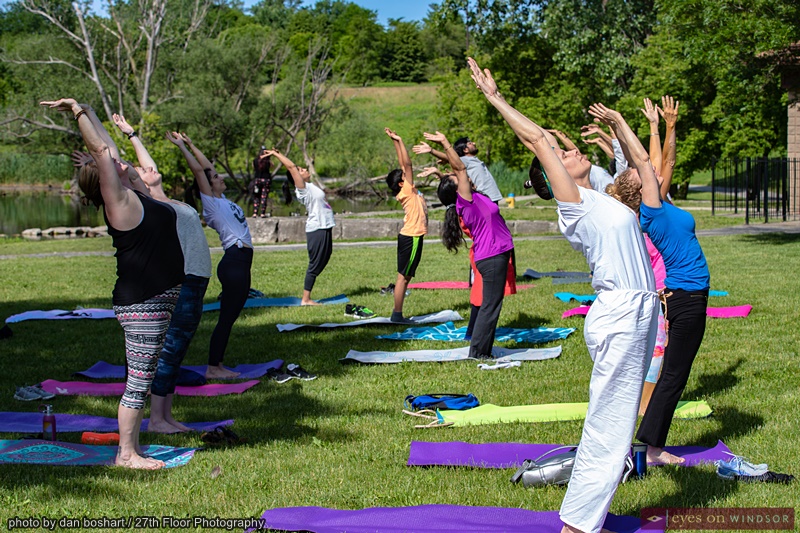 Article and Photos by Dan Boshart