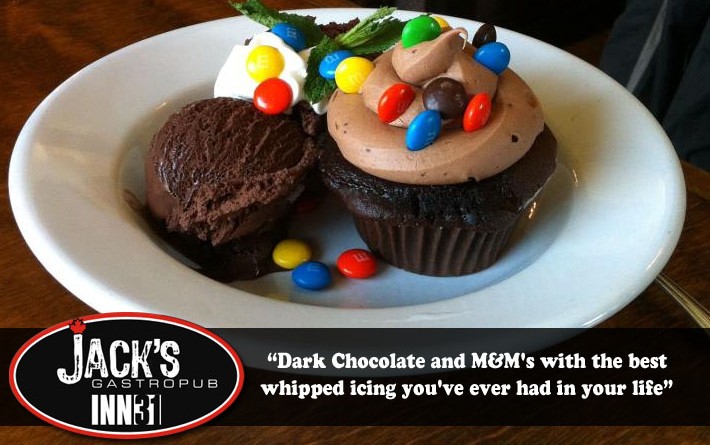 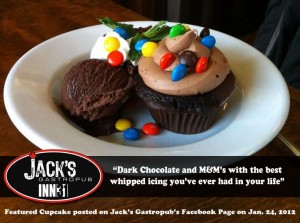 All this week Kingsville is celebrating Valentine’s Day with a competition between local wineries and restaurants in an event known as Battle Cupcake 2013. At the end of the week, Sunday Feb. 17, 2012, a panel of celebrety judges will crown Kingsville’s King or Queen of cupcakes. You can pick up a Cupcake Passport at participating restaurants and wineries. You’ll get a stamp for each establishment you visit and try a cupcake at. If you get three stamps you’ll be entered into a draw to win $225 worth of wining and dining in Kingsville. The draw and judging will take place at The Carnegie Arts & Visitors Centre at 3pm. Anyone interested is welcome to attend.

Battle Cupcake 2013 is presented by Eat, Drink, Dine Kingsville, a group of food service and wine hospitality providers who work together to promote culinary tourism in their community.

One of the participants is Jack’s Gastropub. Owner Trevor Loop tells us that Jack’s has featured a cupcake of the week for several years. Trevor is entering this weeks feature into Battle Cupcake so he wouldn’t say too much about the cupcake to keep it secret from his competitors. Jack’s Gastropub is known for their amazing gourmet burgers so their Battle Cupcake 2013 theme is “for the love of burgers.”

Last night Eyes on Windsor co-owner Theresa Shpak and daughter Brianna baked a beautiful batch of Valentine’s Day cupcakes for Brianna’s grade 2 class. This gave Eric Bonnici, AKA Daddy, the opportunity to taste test a few of the left over cupcakes and practice his judging skills. The cupcakes were colourful, sweet, and moist and now he’s ready to help crown a winner for Battle Cupcake 2013 in Kingsville.

UPDATE: The results are in, to see The Battle Cupcake 2013 Winners click here