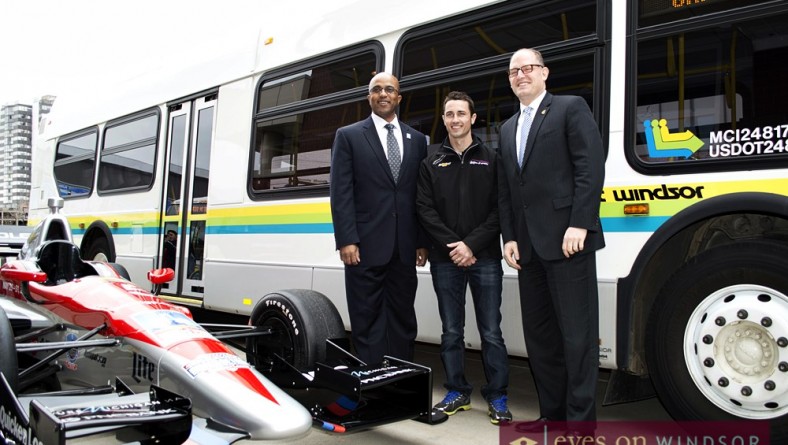 The thrilling sounds of engines roaring at the Detroit Grand Prix can be heard from across the Detroit River just about anywhere in Windsor, Ontario. Being there to see the Indycars zoom by and take part in the events surrounding the highly anticipated international annual race is exhilarating. However, the hassle of travelling across the border only to fight for parking among thousands might have some fans slamming on the brakes.

Fortunately, fans travelling from Windsor, Ontario, can take advantage of safe, hassle-free ticket and transportation packages being offered through the City of Windsor as part of their renewed partnership with The Chevrolet Detroit Belle Isle Grand Prix.

The City of Windsor and The Chevrolet Detroit Belle Isle Grand Prix announced details about their partnership for 2015 at a press conference at the Windsor International Transit Terminal on April 23, 2014. Details of ticket and transportation packages were released. Canadians can purchase packages featuring seating in Grandstand #1 delivering a view of the start/finish line while overlooking all of the action on pit lane, and round-trip Transit Windsor shuttle service to and from Belle Isle.

During announcements Mayor Drew Dilkens said, “I would like to thank Roger Penske, Bud Denker, and Charles Burns for bringing world class racing back to Detroit, for having the City of Windsor as a strong partner, as well as extending significant discount rates to Canadian race fans.” In addition, packages include access to numerous activities including the Mejier Family Zone and concerts at the MotorCity Casino Hotel Entertainment Stage where national and local music acts will perform throughout the weekend.

One of the most popular rock bands from the last decade will take to the stage on May 30 as 3 Doors Down will put an exclamation point on Sunday activities. As fans gear up for the final race, party band Smash Mouth will rock a matinee concert on the entertainment stage. One of the top bands in recent memory Smash Mouth is known for popular hit songs like “All-Star,” “Walkin on The Sun,” and “Can’t Get Enough of You Baby.”

Charles Burns, General Manager of the Chevrolet Detroit Belle Isle Grand Prix, said, “there’s so many things to do out there for both race enthusiasts and as a family. We are offering a great way for our Canadian friends to come over, enjoy some racing, some good food, and some good beverage on Belle Isle.” Kids and grown-up racing fans will enjoy the activities at the Mejier Family Fun Zone. The zone includes bouncy castles, go-karts, and the chance to meet the race car drivers while getting their autographs.

“I took my family two year’s ago, it’s an exciting event, an energetic event, and it really caters to the entire family. There is loads to do besides the racing on Belle Isle for the entire family,” says Mayor Dilkens.

During announcements the media caught a glimpse of the excitement to come.
The Chevrolet Detroit Belle Isle Grand Prix 2015 IndyCar was on display and TUDOR United SportsCar Championship winning driver Dane Cameron spoke as well. The 2015 partnership marks the sixth year that the Grand Prix will work with the City of Windsor. The City of Windsor will return as the official sponsor for the event media centre on Belle Isle Park. Over 700 media members from across the world were there last year and that number is expected to grow in 2015. The historic Belle Isle Casino will provide a working home for many members of the press covering the event at the City of Windsor International Media Center. The media will have access to facilities and services staffed by members from Detroit Metro Convention and Visitors Bureau, and Tourism Windsor Essex Pelee Island, showcasing the unique “two-nation destination” of the Windsor/Detroit area.

For Grand Prix tickets and travel package information or to order visit www.cityofwindsor.ca, www.311online.ca or call 311. Those who have already bought tickets to the Grand Prix can purchase the roundtrip transportation package seperately for 12 CDN per person.