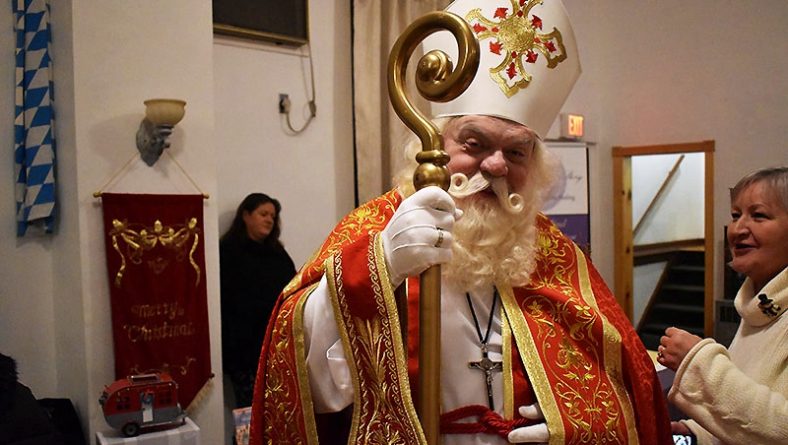 Tucked away neatly inside Drouillard Road’s Heimat Windsor Banquet Centre is a little taste of a German Christkindl Markt, or, as it is better known locally, a Christmas market. In this case it is one loaded with delicious Bavarian food, cooked right on site, and the handiwork of a number of local craftspeople.

Although the crafts are fine and wonderful, colourful and abundant, the star of the show is none other than Father Christmas himself, St. Nicholas. His history of helping others is rather extensive. Born in the third Century, his willingness to change the plights of the downtrodden earned him patron saint honour for archers, merchants, sailors, brewers and many others. 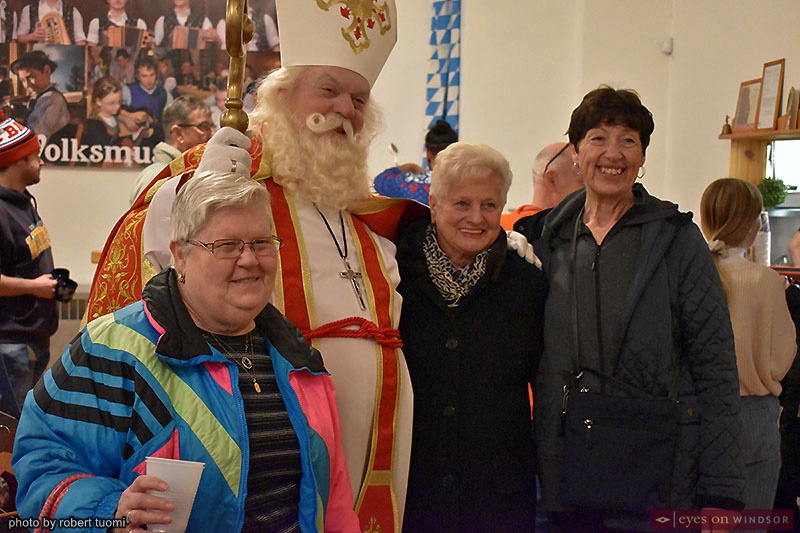 Judy, Terry and Pat enjoy meeting with Father Christmas at the Christkindl Markt at the Heimat Windsor Banquet Centre on Friday, November 29, 2019. Photo by Robert Tuomi / Eyes On Windsor.

As he tells Eyes on Windsor, not all children know the roots of today’s popular Santa Claus but once they caught on, they commence to letting him know of the good things they’ve been doing.

This is a point of satisfaction, even if, as he suspects, they are trying to make sure they have a spot in regular Santa’s good books. They particularly talk of being charitable, and this alone suggests they are on the right track, of “one act of goodness at a time.” 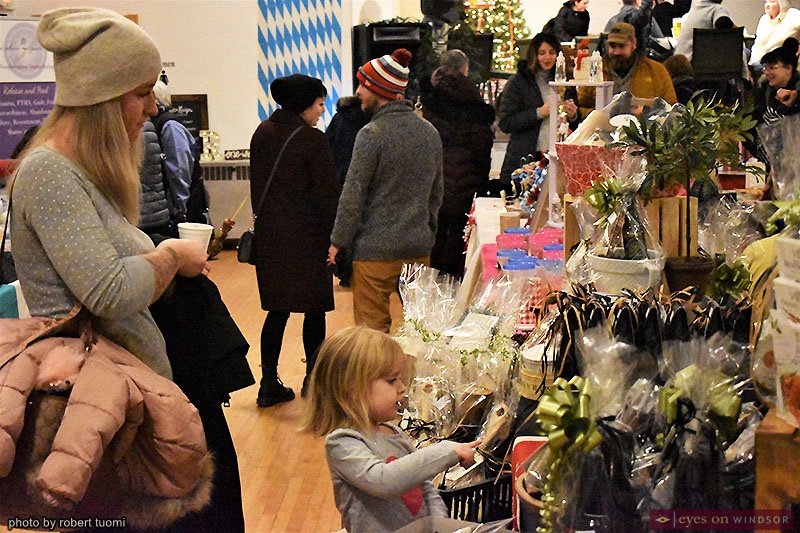 Mother Jaimie and her daughter Thea shopping at the Christkindl Markt at the Heimat Windsor Banquet Centre on Friday, November 29, 2019. Photo by Robert Tuomi / Eyes On Windsor.

Aside from St. Nick, as he is also affectionately known, the hall was jam packed with creativity emblematic of products to keep hair in its place – scrunchies – art for empty walls, adornments for necks and ears and right down to olive leaf teas.

Food, of course, was the other popular element. This being the Heimat, it was all German all the time with a number of specialties, such as Obazda, Bratwurst and Schnitzel which, it turns out, are ideally washed down with the tasty and seasonal Glühwein, a served hot spiced wine. 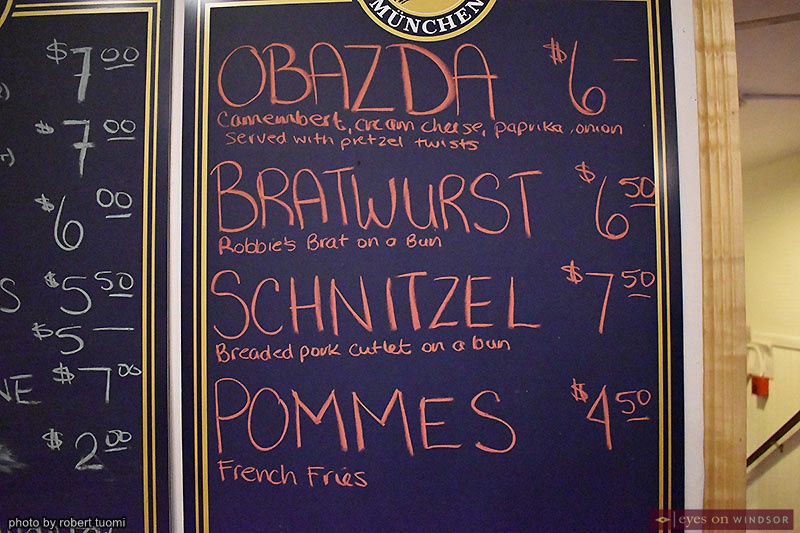 A menu display showcasing the traditional Bavarian / German food available for purchase at the Christkindl Markt at the Heimat Windsor Banquet Centre on Friday, November 29, 2019. Photo by Robert Tuomi / Eyes On Windsor.

Two of the vendors had particularly interesting stories. Ted Krüzsely had laid out a collection of t-shirts, Christmas cards and original artwork. Although he is an artist, he is a contemporary artist working locally in a company which produces video games. Besides the fact such games are generated on a computer screen, he nonetheless kept on hand a notebook and was seen continually working on different sketches. These he will transfer to his computer. 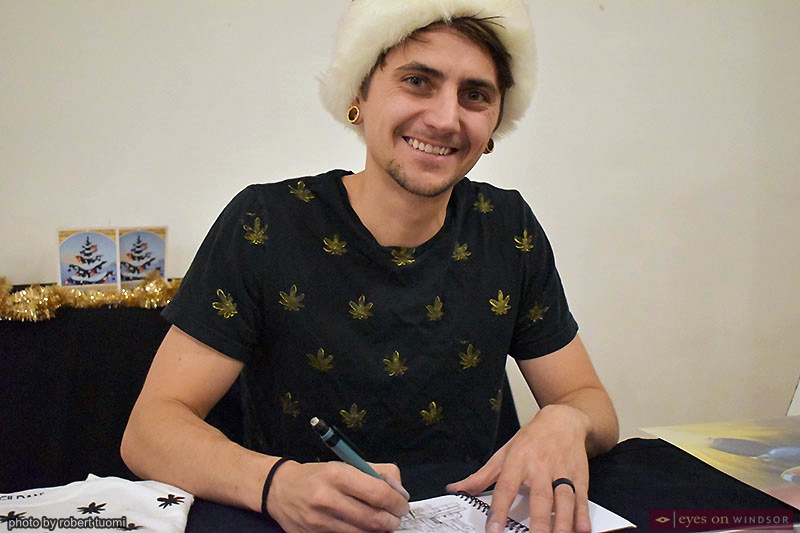 Krüzsely is one of those almost rare people who knew exactly what he wanted to do in life, while he was in kindergarten. Based on that, he plotted a course of learning that brought him to St. Clair College and Sault Ste. Marie’s Sault College’s video gaming art school.

Learning, in his case, is continual. His most recent educational pursuit was spending time at a video game artist school in Toronto. He also produces more traditional paintings with a space age flair.

While he is largely where he is because of a decision made decades ago, school teacher Amanda, the artist behind November’s Eve Jewelry, has only been selling her creations, including necklaces, ear rings and ornaments, for two months.

Amanda Madison of November’s Eve Jewelry at the Christkindl Markt at the Heimat Windsor Banquet Centre on Friday, November 29, 2019. Photo by Robert Tuomi / Eyes On Windsor.

She crafts all of her pieces from clay and then surrounds them with metal to create some of the finest looking and creative jewelry around. Her products, she tells Eyes on Windsor, are designed for women of all ages. She operates with a goal to never replicate anything on offer from the mass merchants in the malls.

As to goals, participating in Art in the Park is one particular one. In a few weeks, she will take her creations to Windsor’s Bright Lights at Jackson Park.