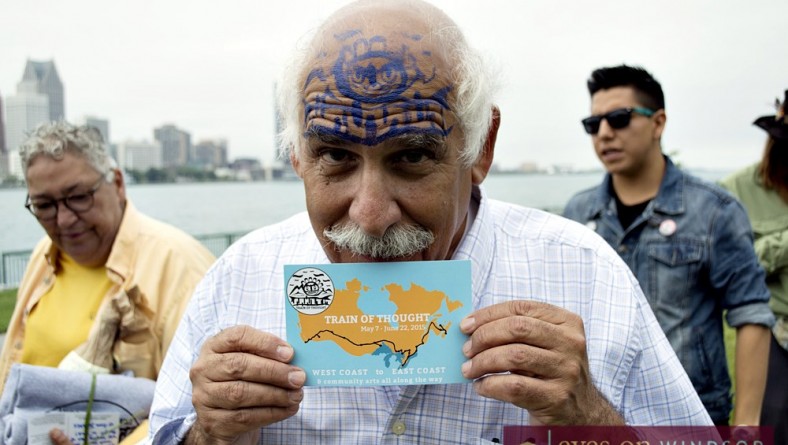 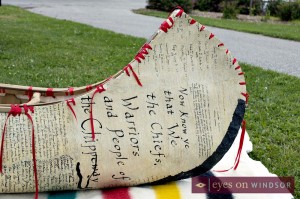 Toronto based Jumblies Theatre’s unique, cross-country intercultural arts project, Train of Thought, stopped in Windsor, Ontario on Saturday, June 13, 2015. Train of Thought travelling artists attended the Downtown Windsor Farmer’s Market in the morning. During the afternoon the group gathered at Windsor Sculpture Park. Two interesting works in progress where showcased including the Treaty Canoe and a Boot Weaving Project.

A team of travelling artists young and old are collaborating with local partners to collect and share stories and learn about Canada’s Indigenous histories and landscapes, with art-making all along the way. Train of Thought began it’s journey in Vancouver on May 12, 2015 and will arrive to a grand finale at the Halifax train station on June 18, 2015. Through participatory artmaking this project is fostering reconciliation and collaboration between First Nations and settler/immigrant artists. 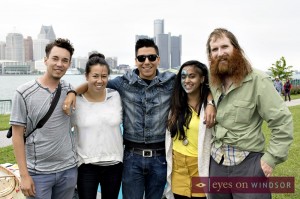 Train of Thought in Windsor, Ontario

The Windsor leg of the journey was produced in partnership with local artistic organizations including the Arts Council Windsor and Region, and local artists including Nadja Pelkey, Tory James, Alex McKay, and the music duo Kate and Rich. 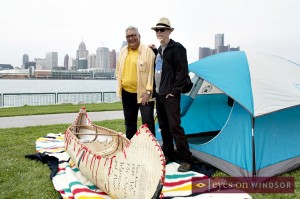 Mckay and James hold workshops where people, particularly settlers from non-Indigenous backgrounds, learn about treaties with the Canadian Government by transcribing them onto the canoe. Treaty Canoe speaks of mutual, sacred bonds of honour and makes clear that we are all treaty people. “The Treaty Canoe is specifically about settlers learning about treaties,” Says Train of Thought artist Nikki Shaffeeullah. “The Treaty Canoe is a snap shot into what is going to be a larger project a couple of years down the road.”

For the Boot Weaving Project “we gather fibers from the flat lands and weave them into the boots,” explains Shaffeeullah. “The boots include natural fibers added all along the way from the Pacific to where we are now and we will continue adding as we travel to the Atlantic.” 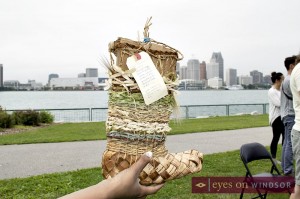 Nadja Pelkey is an artist, writer and administrator living in Windsor. She was previously the program coordinator for Neighbourhood Spaces Socially Engaged and Community Based Artist in Residence, and is the interim executive director at Arts Council Windsor & Region. 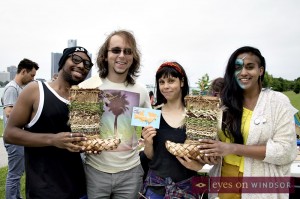 Kate and Rich are a pair of musicians living in Halifax. Touring their act by bicycle is as important to them as laughing, dancing and foot-tambourines. In addition to their ragtime klezmer act on accordion and clarinet, Kate Romain (originally from Windsor) is a puppeteer
and mixed media artist, and Richard Driedger (from Leamington) is a filmmaking scientist.

Tory James is a photographer who has worked almost every aspect of the trade, from journalism to commercial to corporate. He has also sat on numerous First Nations boards, committees, and councils. He is an unapologetic activist if sometimes a contemptible spy. He once went on a three-day canoe trip with Gordon Lightfoot.

Alex McKay holds a BFA from the University of Windsor and an MFA from the School of the Art Institute of Chicago, and for over 25 years has been making work that he has described as ‘being about landscape and identity, empire and place, from a ‘post’ – or now, ‘de-colonizing perspective’. The Truth and Reconciliation Committee’s Calls to Action somehow change his work, as did the advent of Idle No More. He believes that it is Settlers who need to understand that ‘We are all Treaty People’. 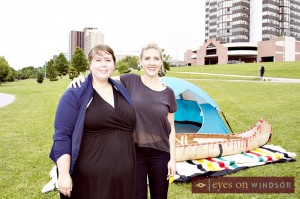 “Windsor is known as a border city: it sits on the shores of the Detroit River at the very end of the VIA line that runs from Quebec down the busy corridor into the USA. We envision this boundary point functioning as a space for reflection and pause; a gathering place where people can come
and connect with each other to bring something, show something and share something,” says Nadja Pelkey, Arts Council Windsor and Region.

Ruth Howard, Artistic Director of Jumblies Theatre and lead artist of Train of Thought, says: “When Train of Thought started percolating in my mind years ago, would never have imagined how huge it would grow. It’s a project that’s inventing itself as it gathers momentum: more places, more days, more people, more creative ideas, more means of transportation, more sense of purpose and urgency. The literal, figurative, historical and imaginary tracks we will travel, will inevitably bring everyone back to a slightly different place, from where new track-shifting artful expeditions can be planned.” 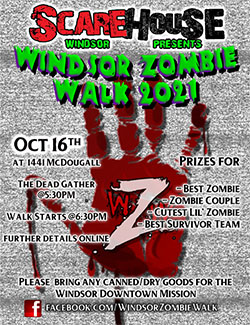