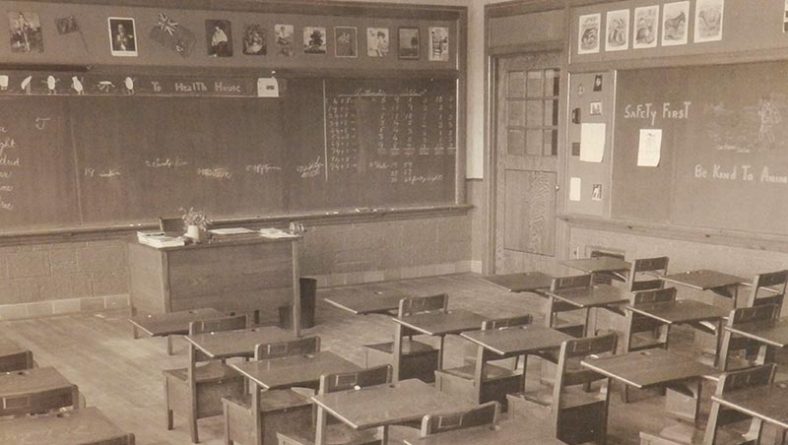 For most of its history, the most common method of writing in Canada was a style known as cursive, distinguished by the almost artistic flow of one letter into the next.

(Photo above: A photo of a classroom inside Hugh Beaton Public School with cursive writing on the chalk board, on exhibit as part of the Chimczuk Museum’s Cursive Writing: Reading and Writing The Old School Way display. Photo by Robert Tuomi / Eyes On Windsor.)

More and more in the 21st Century, cursive is relegated to museums. School Boards across the province are no longer mandated to even teach the once predominate form of message writing.

To prevent this old and formidable hand-style from being forgotten, downtown’s Chimczuk Museum presents a room full of exhibits related to cursive writing titled “Reading and Writing the Old School Way.”

As the title suggests, cursive is old school, a victim of the computer age and its ubiquitous printed letters for texting and word processors. Back in the day, before electronic devices came along, almost all manner of communication, whether business or personal, was the easy flowing cursive.

There is some interest of late to restore the staple. Chimczuk points out that cursive advocates, “cite studies by psychologists and neuroscientists which suggest strong links between handwriting and broader educational development. Children, they argue, not only learn to read more quickly when they first learn to write, but also retain information better when taking notes by hand.”

Such issues, of course, may have been non-existent during cursive’s glory days, or were they. The exhibit includes a photograph of a Hugh Beaton School classroom, circa 1929.

In its environment of neatly arranged student desks there is something lurking. On the front blackboard, the teacher has hand written, in cursive form, items for the daily lesson.

In contrast, on the side blackboard, exists a harbinger of the future. There, a safety message is printed in block text. While students were well versed in cursive, apparently they were also adept at understanding block letters.

A non-related photo from about the same era shows three book-keepers, armed with writing instruments, going about their work at a slant top desk. There is no evidence of even rudimentary calculators. Although they did exist, they were not in wide use and had not become common among accountants. That would come later.

Among the photos, museum staff have positioned various heirlooms from 100 year old printed advertisements of the latest pens to actual secretaries.

These secretaries were actually furniture combining a cabinet and bookcase. One on display dates to 1850 and is made entirely out of walnut.

Historically significant locally, it was owned by lawyer Charles Baby. He inherited Old Sandwich’s Duff-Baby house in 1833 and no doubt his secretary contained many of the town’s important business papers. He was the second mayor of the community.

There is some certainty that the correspondence he would compose at his secretary would, without exception, be on white paper. During Windsor’s early days, gentlemen preferred whites.

“Ladies,” visitors are told, “may use delicately tinted and perfumed paper if they choose, but for a man to use it is, to say the least, in very bad taste.”

As a curiosity, of sorts, the exhibit notes cursive’s disappearance is only limited to English.

“In Arabic,” for example, “most letters of any given word are joined to one another in a continuous flowing line. Thus, there is no significant distinction between cursive and non-cursive forms of Arabic.”

The exhibit will be on display, at regular admission rates, at the Chimczuk until May 27.