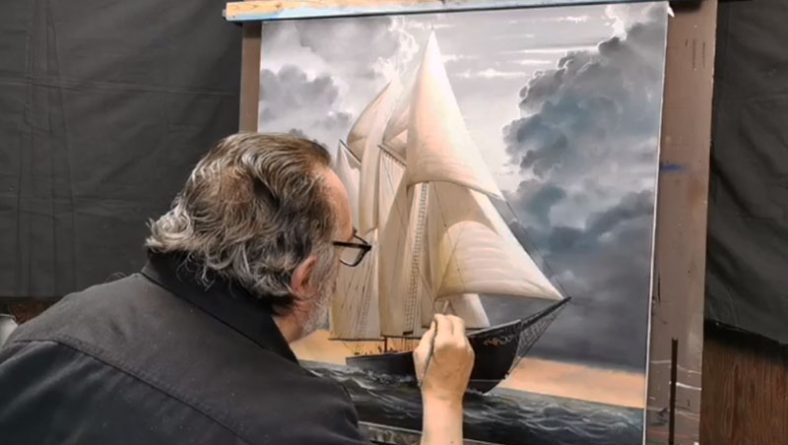 Internationally-renowned artist Ronald J. Suchiu has been busy creating a painting of the iconic Canadian fishing schooner, Bluenose, in celebration of the one-hundredth anniversary of it’s launch in Lunenburg, Nova Scotia. The formal unveiling event will be hosted online via Facebook on March 26, 2021 (facebook.com/suchiuartandframing) where Suchiu will be in attendance giving fans and art enthusiasts a chance to talk to him online from his studio in Essex County.

“To me, the Bluenose has always represented stability,” Suchiu states, “That’s why I’ve depicted it in this painting as emerging from a storm, un-phased. It’s a symbol of hope that we need right now as a nation coming out of a crisis stronger than ever.”

The original Bluenose was built in Nova Scotia’s legendary Smith and Rhuland Shipyard specifically to contend in the International Fisherman’s Cup race. In October 1921, the Bluenose won her first race and for the next 17 years, the vessel defeated all contenders. In 1928, the Bluenose defeated the Thebaud in the final race series and was named Queen of the North Atlantic fishing fleet.

An interesting fact, one of many, is that the Canadian Mint changed the country’s dime in 1937, and that ship seen on the back of it to this day is the mighty Bluenose.

In the past, Suchiu has partnered with names like Gordon Lightfoot, known among other things, for his song about the sunken SS Edmund Fitzgerald, and Millvina Dean who was the last living survivor of the Titanic tragedy. Lightfoot and Dean both have declared Suchiu as their favourite maritime artist. 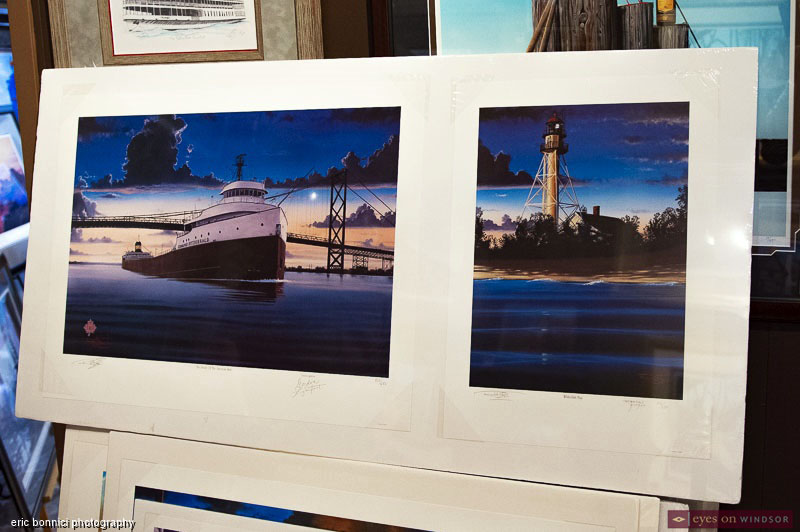 A print of Artist Ron Suchiu’s Pride of The American Side Set painting featuring the Edmund Fitzgerald and signed by Gordon Lightfoot 565/650 on display at Suchiu Art & Framing in Essex, ON. Photo by Eric Bonnici / Eyes On Windsor.

The Edmund Fitzgerald painting received a lot of attention, officially named The Pride of The American Side, it is signed by Gordon Lightfoot. It shows the ship passing under the Ambassador Bridge along the Detroit River. An additional painting or secondary print is matted next to the main painting and features Whitefish Bay on the eastern end of Lake Superior where the ship actually sank.

In 1997, Suchiu travelled to England to meet with Millvina Dean, who at just two months old was the youngest passenger aboard the Titanic. She signed Suchiu’s original Titanic painting and on the back of it wrote “when this you see, remember me.” Millvina also signed all the prints. She passed away in 2009.

Suchiu’s ability to capture the spirit of Canada in past works like Canada 150th has given him such honourable titles as “Canada’s National Treasure” by Prime Ministers Jean Chretien and Paul Martin. Suchiu’s art has raised over $1.5 million in charitable contributions alongside $20 million in total sales revenue. 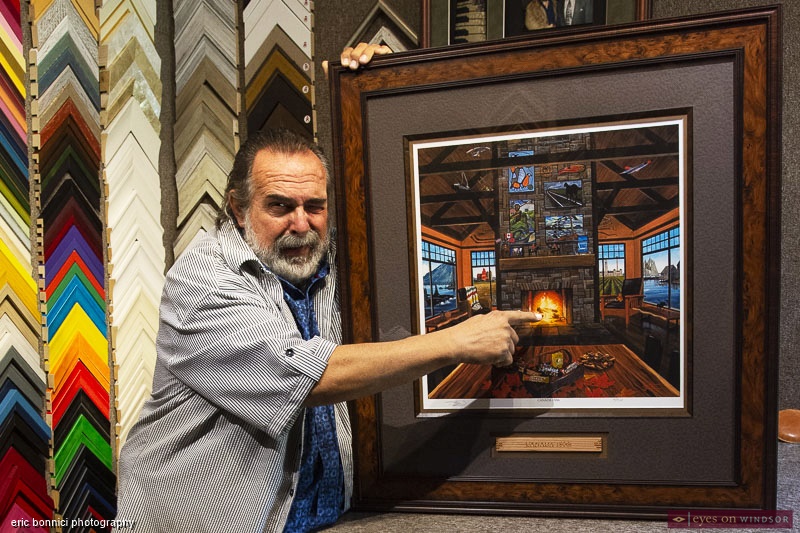 Artist Ron Suchiu playfully pretends to burn his finger in the fireplace painted on his Canada 150th print in his studio at Suchiu Art & Framing in Essex, ON. Photo by Eric Bonnici / Eyes On Windsor.