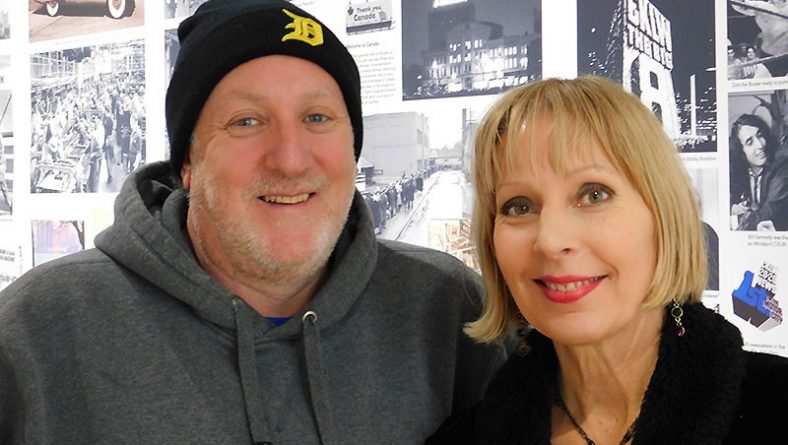 Every day the wandering, quiet waters of the Detroit River rub up against the shores of two of the most storied cities in North America. Some of that rich history, from the turn of the Twentieth Century to 1990 can now be found on the walls of the Artspeak Gallery in Walkerville in a display aptly titled “A River Runs Between Us.” 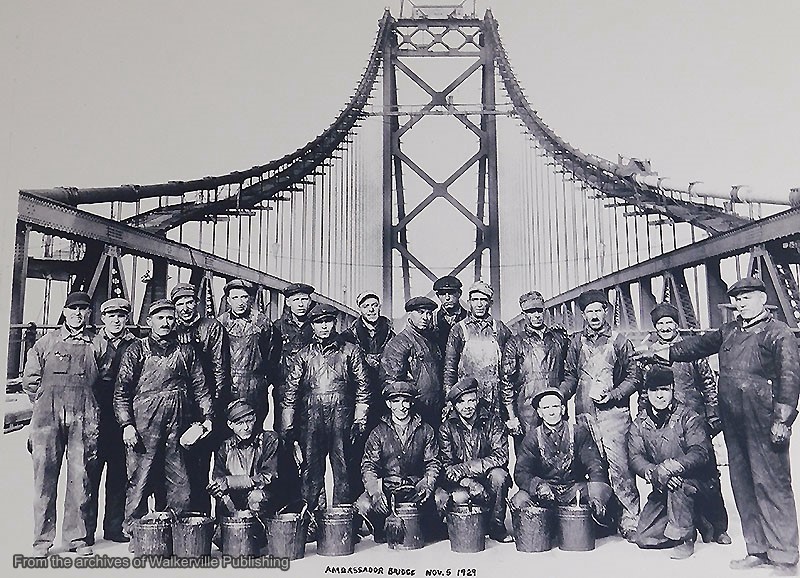 When they met in the middle, it was break time for the two crews, one American, the other Canadian, working to paint the newly constructed Ambassador Bridge. One of the photos included in Walkerville Publishing’s Artspeak exhibit A River Runs Between Us. From the archives of Walkerville Publishing.

Windsor’s history covers the east wall of the gallery, while Detroit is on its west. In many ways this abundance of a considerable past, for both cities, has shaped the communities’ life and times and was carefully curated by Walkerville Publishing’s principals Chris Edwards and Elaine Weeks. Although the walls tell the story, there is much more in two books the pair have cobbled together, mostly from historic photographs. The first, which took some six months of copious work, was 500 Ways You Know You’re From Windsor, now a Canadian best seller. It was recently followed, after a full year of gathering and researching, by 5000 Ways You Know You’re From Detroit, currently enjoying brisk sales in one of America’s most important cities.

How important was Detroit? Much of its glorious history is all laid out neatly, in mostly black and white photographs. It and Windsor have often been cities on the leading edge of accomplishments. Visitors will see proof that the neighbours have considerable laurels to rest on. 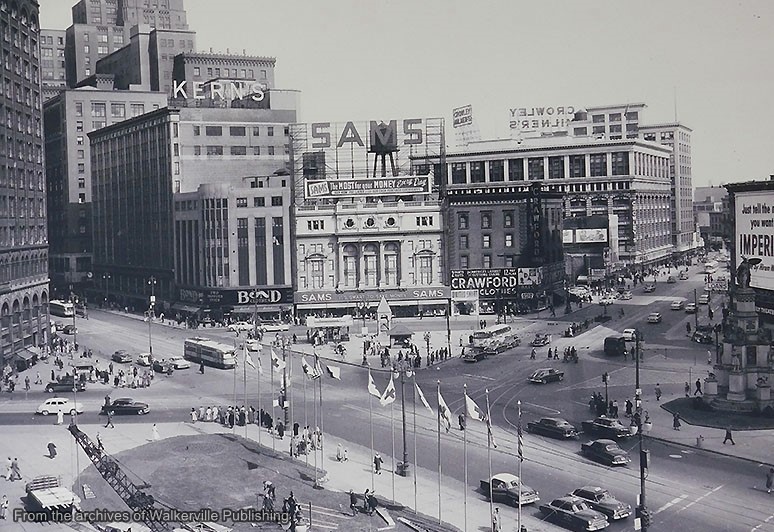 Detroit’s legendary status in music goes back well before Motown, to a quiet district known politely as Paradise Valley. In the 1930s it was filled with the fledgling sounds of jazz, bebop, gospel and rhythm and blues. In its stadiums and arenas, the D was doing something no other American city has done, ever, winning big league professional baseball, football and hockey championships in the same year. For lovers of salty treats, Detroit once had over 40 potato chip makers. These days, only Better Made remains. 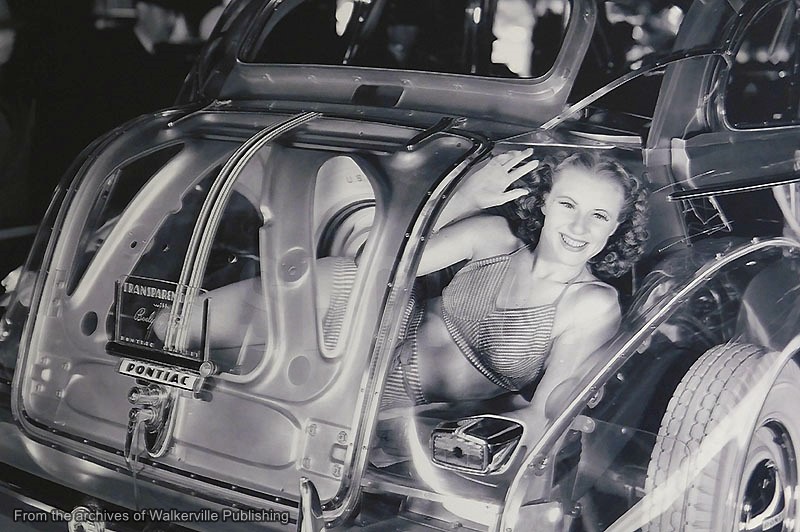 In this old photograph, a young lady is in the trunk of a transparent Pontiac, part of an exhibit by Fisher Body at a car show in Detroit. The photograph is part of A River Runs Between Us exhibit at Artspeak Gallery in Windsor, Ontario. From the archives of Walkerville Publishing.

Windsor was no shrinking violet when it came to making vehicles. During World War II, over half of Canada’s military fleet was built by Ford in Windsor. A shot inside the rose city’s once operating Ford assembly works is so littered with workers it looks more like Devonshire Mall on the days before Christmas. 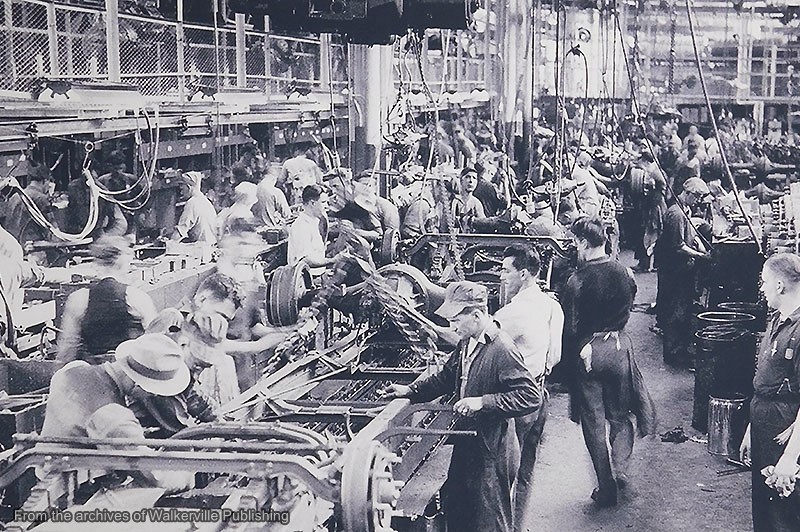 Autoworkers building cars at the Ford assembly plant in Windsor, Ontario, shown in this old photo that is on display as part of A River Runs Between Us exhibit at Artspeak Gallery. From the archives of Walkerville Publishing.

Both cities have lost some of their past’s most imposing structures. Fortunately Edwards and Weeks have photos of the former Hudson’s Department Store, one of America’s largest with a glittering 12th floor and Windsor’s once proud Norton Palmer Hotel. A photo shows what Windsor’s downtown looked like before it was almost completely razed for a progression of new buildings. The city’s back days were rich with unique products like Cincinnati Cream Lager, brewed right downtown. All that remains is a label from the British American Brewing Company’s once fine product. 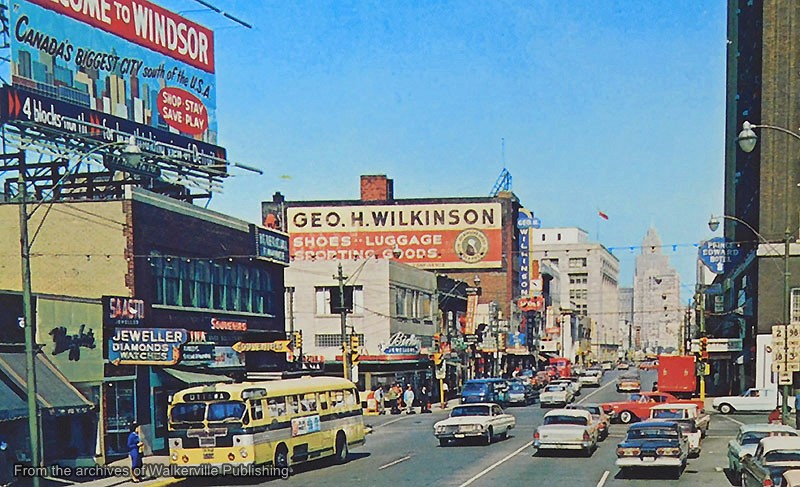 Downtown Windsor in 1952 shown in this photograph that is on display as part of A River Runs Between Us photo exhibit at Artspeak Gallery. From the archives of Walkerville Publishing.

Before the Windsor Casino, now Caesar’s, was built the city’s Elmwood Hotel on Dougall Avenue had its own casino operation. However, as Weeks explained to Eyes on Windsor, the nomenclature was somewhat different back then. Casinos were more entertainment and gathering venues and not gambling establishments.

“A River Runs Between Us” with 120 vintage images shines a clever spotlight on the two cities’ special connections, 60 for each city. Gallery hours are 1pm to 6pm daily until Saturday, December 15 in what Edwards terms, “Our studio for a week.” Artspeak is located at 1942 Wyandotte East, west of Devonshire in Walkerville. 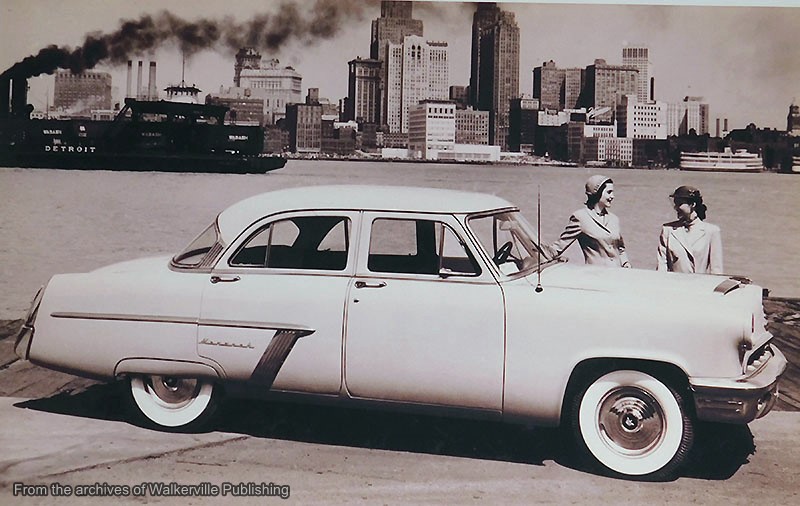 An old photograph of a made-in-Windsor Mercury Monarch at Dieppe Park, is part of the A River Runs Between Us exhibit at Artspeak Gallery. From the archives of Walkerville Publishing.