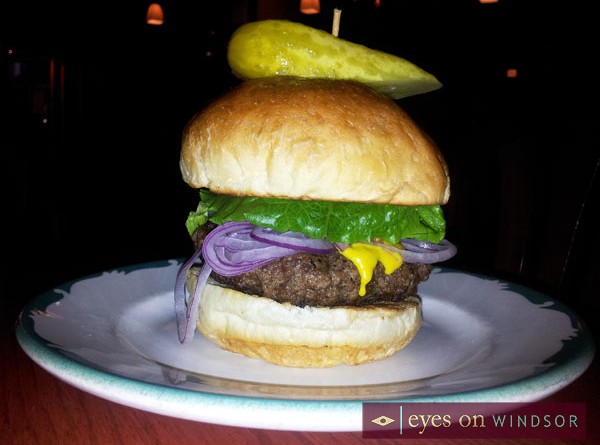 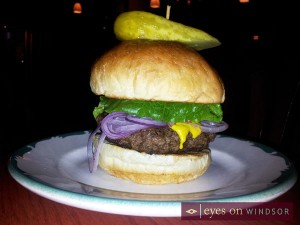 On a warm summer evening my wife and I decided to have a quick dinner at The Walkerville Tavern. You see, after writing a blog post recently called, The 3 Best Burger Restaurants in Windsor Essex, several friends commented that the Walkerville Tavern Burger is one of the best burgers in Windsor. So while deliberating where we would eat we chose The Walkerville Tavern because we were nearby and I wanted to try their burger out for myself. Overall, the experience was good but Theresa’s Eastern Chicken Sandwich and the burger itself were simply awesome!

Now for those of you who are unsure, The Walkerville Tavern is nestled in heritage rich old Walkerville on Wyandotte street between The Willistead Restaurant (formerly Walkermole) and O’Magios Kildare House. It’s a small cozy pub with about 10-12 tables and about 10 bar stools. Quite simply, it reminds me of the small friendly pubs I enjoyed having drinks and conversations at while on vacation in Europe on the Island of Malta. When we arrived at 7pm the dining room was full but luckily one table was open and we promptly sat ourselves. The bartender quickly came to our table and cheerfully asked how we were and if she could get drinks for us. Upon returning with the drinks she provided a menu. 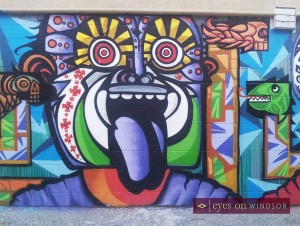 Of course you’d expect the menu to feature typical pub fare like burgers, fries, club sandwiches, and poutine but not on this one. Yes there were burgers, or should I say a burger, and while the menu was not very extensive it did offer a good range of choices combined with unique eats not typically found in a pub. For appetizers it wasn’t shocking to see wings or fries but spring rolls, grilled tofu, chili grilled prawns, and crispy sea salt squid weren’t something I’d expect. For salads, the Caesar wasn’t surprising but its not too often you’ll find a grilled goat cheese salad in a pub.

The sandwiches all sounded great and included a rib-eye, eastern chicken, and tavern burger (we got to try two of the three). And of course there were the “WOK Creations” that included some great sounding East Asian type dishes like the Shanghai Market, Thai Curry Coconut, Singapore Street Noodle, and Jamaican Jerk. What Jamaican?! Of the five Wok Creations the Jamaican Jerk definitely isn’t East Asian but it sure sounds good and is part of what makes the menu unique. 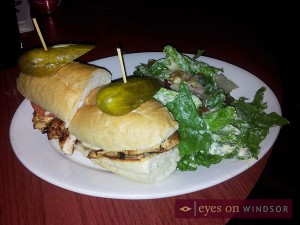 As you already know I decided upon the Tavern Burger and my wife Theresa the Eastern Chicken Sandwich. Now, it was shocking to see only one burger on the menu. After all, several friends insisted we try the burgers so it was assumed there would be more than one on the menu.

Here’s the thing the Tavern Burger is customizable. You can add cheese and or bacon and there’s a board on the wall with a list of various toppings you can add. I kept mine fairly simple and opted for cheese and blue cheese dressing on the side.

The meat is sourced locally and is ground into patties right in the kitchen. In fact, the bartender Heather informed me that, “He (Mark the managing partner) gets the meat from King’s Halal Meat Market on Wyandotte Street East. It is raised locally. It is the same beef the Lebanese use for Kibbi. Premium ground beef that can be eaten raw.” So you know you’re getting fresh handmade patties which they’ll cook to your specification (from rare to well done).

The Eastern Chicken Sandwich that Theresa ordered was described on the menu as, “Lemon grass grilled served with all the trimmings in our house caesar sauce”.

As we eagerly awaited our order the staff was in the middle of shift change. Since the order seemed to be taking a little longer than expected to arrive, we decided to run outside and snap a few pictures. In addition to snapping photos of The Walkerville Tavern we were pleased to see the mural on the former Walkermole still on the ally side wall of the now Willistead Restaurant. Last year during the Walkerville Art, Walk, and Rock festival artist Meca Seph painted a tribute to the Mexican Day of The Dead. So while we were out there we snapped a few more pictures of that too. Upon returning to our table the food still was not ready and it had been at least 35 minutes since we ordered. Theresa spoke to the bartender about it and she was surprised how long it was taking. She went in to speak with the cook. Within 5 minutes the food arrived. 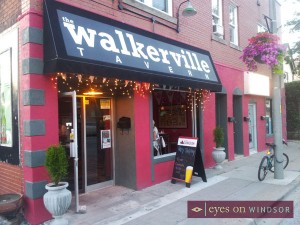 The Tavern Burger looked excellent! The patty is one of the main things I really focus on when deciding if a burger is one of the best in Windsor. Well let me tell you, this is an excellent patty that was grilled to my specifications, nice and thick (about an inch deep), perfectly charred on the outside and juicy on the inside. Definitely, one of the best in the city! In fact, it reminds me of the delicious homemade BBQ burgers my mom makes. So when I tell you the Walkerville Tavern Burger has my blessing you can rest assured it is a darn good burger. Of course, there’s more to a burger than the patty. The fresh bun, fresh toppings, and excellent tavern fries made the burger a delight to eat.

In addition, Theresa allowed me to taste her Eastern Chicken Sandwich. The chicken was perfectly cooked and tender. This Walkerville Tavern sandwich was bursting with flavour. The bad news is Theresa didn’t finish it all because she was full so our server put it in a take out container for her but we forgot it on the bar after paying. I regret that we didn’t go back to get that delightful chicken sandwich.

It was a pleasure to finally experience the flavours of The Walkerville Tavern. The servers and bartenders were equally pleasant and friendly making the entire dining experience a great one. In addition, I have another venue that serves burgers to add to my list of best burger restaurants in Windsor.