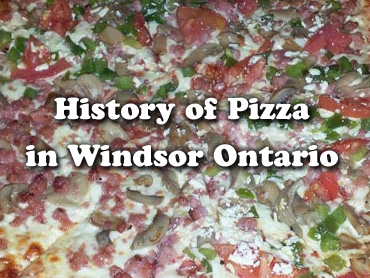 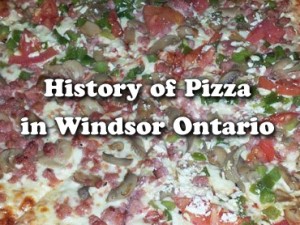 You’re probably hearing a lot about one of Windsor’s favourite annual lunch hour events, the 13th Annual Windsor Star Pasta & Pizza Fest. It’s all over the radio, newspaper, and social media because pasta and pizza are two of the top favourite comfort foods of all time. Windsor’s rich history and diverse cultural community has blessed us with a legacy of immigrants that have brought us many styles of some of the best pasta and pizza varieties in the world. This year’s pasta and pizza festival combines the best of both worlds. In fact, you’ll also find a few other surprises including desserts, stir fry, and avacodo mango spring rolls.

So as the event draws closer I started wondering about the history of pizza. Where was pizza invented and by who? Of course I Googled it and the more I looked the more I found. Initially, I expected to find Pizza was invented in Italy but that’s not the case. Yes, there is evidence of pizza in Naples Italy, which was part of Ancient Rome, over 2,100 years ago or about 100 B.C. In fact, the neighboring city of Pompeii, destroyed and covered by the volcanic eruption of Mount Vesuvius in 79 AD, provided concrete evidence of pizza ovens being wide spread in Italy during this time period. You see, the city of Pompeii was lost for over 1500 years but in 1599 it was rediscovered. Then in 1748 Spanish engineer, Rocque Joaquin de Alcubierre began recovering many of the artifacts from beneath the city. These artifacts were well preserved because of a lack of moisture and air and included numerours pizza ovens. Clearly, there is a strong connection to Pompeii, Naples, Ancient Rome and the orgin of pizza.

Now some may say that pizza was invented in Egypt, India, or by the Persians in Iran. From what I can tell, these were more or less flat breads lacking toppings. Well with the exception of the Persians back in about 500 BC who used cheese and dates as toppings. This is a far cry from the toppings found in today’s topping rich pizzas. The Ancient Greeks back in 800 to 600 B.C. made a flat bread called plakountos that was topped with herbs, onions, and garlic. Still not that close to today’s pizza but an interesting fact because it was the Ancient Greeks who founded Naples. Ah-ha! So it could just be that plakountos evolved into the pizza of Ancient Rome, Pompeii, and Naples.

Looking back in time this may just be the case. You see, Spanish explorers introduced tomatoes to Europe from Central or South America back in the mid 1500’s. Around that time the people of Naples began using tomatos as a featured ingredient on their pizzas. Now here’s the tipping point, Chef Raffaele Esposito of Naples created a pizza back in 1889. This pizza is known as Pizza Margherita because it was made with basil, cheese, and tomatos, the colours of the Italian flag, in honour of Italy’s Queen Margherita when she was visiting Naples.

So there you have it Naples Italy in 1889 is where the orgin of today’s modern pizza can be traced back to.

But what about the history of pizza in Windsor Ontario?

Well I decided to start my research by asking in the Facebook Group “If You Grew Up Windsor Ontario You Remember…” Within seconds members Gerry and Gary both responded with Volcano Pizza as a possibility. In fact, Lynn from the group suspected that Volcano Pizza was the first because she remembers her mother taking her to Detroit for pizza before it opened. According to the Windsor Mosaic website project launched in 2004 by The Windsor Public Library, Gino Manza came to Canada from Figline Italy. Eventually he moved to Windsor to be near his brother-in-law, Stan, who ran a pizzeria in Detroit. Gino eagerly learned all about Stan’s pizzeria then held the grand openig of his own Windsor based Volcano Pizza in 1957. It was the first Italian restaurant in the Downtown Windsor area (located at 157 Wyandotte Street East). It quickly grew in popularity just by word of mouth going from a 60 seat restaurant to 400 seats. After almost 30 years in the business Gino retired to spend time with his new grandson and sold the business in 1986 to the Downtown Mission Centre. Today you’ll find Jade Chinese Cuisine Restaurant at this location. Now this is a great story but Volcano Pizza is not the first pizzeria to open in Windsor.

you see, my friend Janette Nix messaged me to remind me about Sam’s Pizzeria and Cantina. You see Sam’s has been proudly serving Windsor since 1946. According to Janette the original owner, obviously named Sam, was a good man who poured his heart and soul into his pizzeria. That’s why the pizza was so incredible. In fact, Janette says, “I knew the original owner because when I was a kid my grade school was almost beside the pizzeria. Sam was a great man who we would often see behind the restaurant when we walked by on our way to and from school. My older brother often spoke with him. Sam was usually smoking one of those huge cigars. All the kids knew who he was because he often donated pizzas to our school fund raisers. In fact, we used to say the pizza was so good because Sam would ash his cigars into the pizza ovens. Of course that was never the case but it’s what everyone would say. He was good to the people he served, especially to all the school kids that passed through his alley. Same with the floral shop next to him. They would hand out flowers to the kids on their way home to give to their Moms on the Friday before Mothers day. We were lucky to have great people working in those establishments back then.”

So as you can see, it looks like Sam’s Pizzeria and Cantina might possibly be the first pizza restaurant to ever open in Windsor Ontario. Now I am not saying this is a fact, but as far as I know it might just be the case. 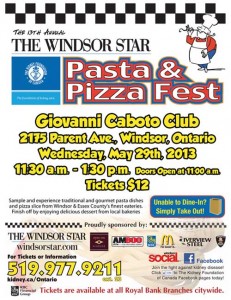 Unfortunately, the current owner of Sam’s Pizzeria is unable to participate in this year’s 13th Annual Windsor Star Pasta & Pizza Fest but we hope he’ll be able to make it next year. One of the oldest pizzerias particpating in the event might actually be Antonio’s Original Pizza. Antonio’s was the first pizzeria to open in South Windsor back in 1959 by Tony Ciaravino. According to Antonio’s website “today, more than 30 area pizzerias can trace their roots directly back to Antonino’s original pizza recipe.” In addition to Antonio’s Original Pizza you’ll be able to sample pizza from many of Windsor’s finest pizzerias. In fact, you’ll get to try a wide variety of mouth watering pasta dishes, desserts, and a few other surprises from some of Windsor’s favourite bakeries, restaurants, and hospitality businesses at this year’s festival.

Proceeds from the event enable The Kidney Foundation of Canada to pursue its vision of kidney health, and improved lives for all people affected by kidney disease. So we hope you’ll join us in savouring lots of great food at this year’s 13th Annual Windsor Star Pasta & Pizza Fest.