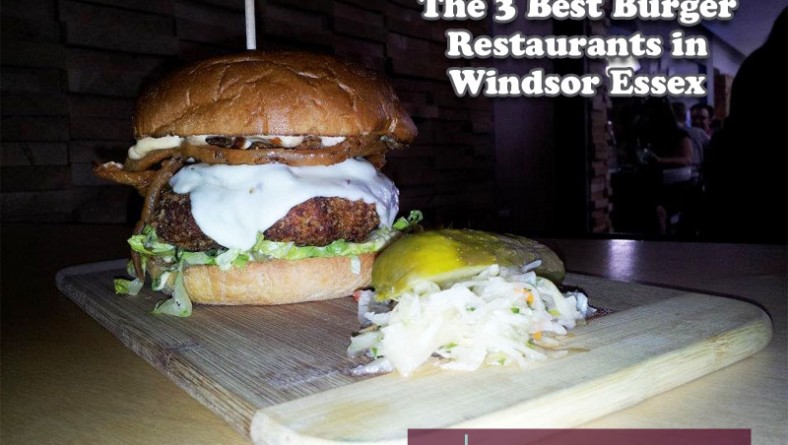 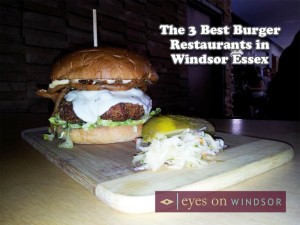 The best hamburgers in the country can be found right here in Windsor Essex. That’s not just my opinion either because two of the best burger restaurants in Windsor Essex from my list have been featured by major media publications. Yes I’m talking about Jack’s Gastropub and Motorburger. So what’s my third pick? Sadly, The Hungry Hippo California Burger Shack is my third pick. I say sadly because it has closed down until the owners sell the current location and move to a new bigger venue. Now to be fair I know there are a lot of other great burger restaurants around Windsor Essex. Some I have tried and others only have heard about. So what you’re about to read is a list of the best burger restaurants in Windsor Essex based on my personal experience. You’re free to add to the list of best burgers, disagree, and make suggestions in the comments section at the end of this post. 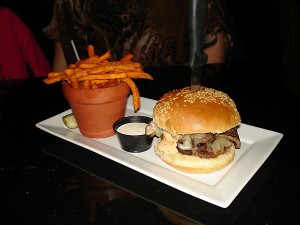 The burgers at Jack’s Gastropub in Kingsville first caught my attention a couple of years ago on Facebook. You see each week, on Wednesdays, they post their featured burger on their Facebook page. So back in 2011 on a cool Friday in November we tried them out for the first time. You can read our restaurant review of Jack’s Gastropub here.

Jack’s uses mostly locally sourced ingredients including the beef used in their burgers. The quality and freshness comes through in the taste of the burger patties. In addition, the burgers are always perfectly charred on the outside and juicy on the inside. My favourite is the Spicy Jack Burger, topped with lots of hot peppers, crispy bacon, caramelized onion, Monterey Jack cheese, and Jack sauce all on a sesame Kaiser. My wife Theresa’s first burger at Jack’s was the Jack’s Burger served with succulent local beef topped with bacon, caramelized onion, fresh mushrooms, Monterey Jack cheese, and zesty Jack sauce on a fresh sesame kaiser bun. For sides you can choose Jack’s creamy coleslaw or sweet potato fries. The sweet potato fries are served in a cute little orange flower pot.

As you already know we’re not the only ones praising the burgers at Jack’s. You see for National Burger Day 2011, Jack’s Gastropub’s juicy gourmet burgers were named as the “must-have burger gem” and local favourite for Windsor & Essex County. Recently, they’ve been featured by Canada’s Largest Newspaper, The Globe and Mail, and have been covered by CTV Windsor, and CBC Windsor. In fact, as we posted a while ago, Jack’s Gastropub is going to be featured by the hit Food Network Canada T.V. show You Gotta Eat Here! Filming for the show takes place on Thursday June 13, 2013. That same day they’re showcasing Windsor Essex County’s first true food truck that they’re operating in partnership with John Neill of Smokin’ Aces Mobile BBQ. The food truck named BlackJack GastroVan was just introduced to the public late May / Early June 2013.

The bottom line is we think Jack’s Gastropub serves up some of the best burgers in Windsor Essex and we’re not the only ones.

As you might already know the Motorburger episode on You Gotta Eat Here! recently aired. Filming took place in the summer of 2012 and we were there. In fact, we got to meet the host of the show John Catucci. Motorburger has some of the most amazing gourmet burgers around. In addition, Readers Digest praised Motorburger for having the “best nacho platter ever” in 2011. Then in the June 2012 edition of Readers Digest Canada Motorburger’s Deux Chevaux Burger, topped with baby spinach, Kozlik’s Daily Dijon mustard, melted Gruyère, red onions caramelized in Maudite beer and strips of smoked bacon on a brioche bun, was listed first out of the five best burgers in Canada.

One of my favourite burgers at Motorburger is the Fire Bird, made with fresh chicken ground with serrano chilies topped with melted muenster cheese, a four pepper medly, and spicy shaved crispy onions. Now this burger is amazing and the patty is always perfectly charred on the outside and juicy on the inside. Simply amazing! In fact, co-owner Jay Soulliere was on the judging pannel with me back in 2012 for CBC Windsor’s First Annual Best BBQ Burger contest and he revealed his burger cooking secret. You see, Jay first cooks his burgers in the oven and then finishes them off on the BBQ. I’ve tried this at home and it really does make for a perfectly cooked burger. However, I have been unable to replicate the amazing burger creations you’ll enjoy at Motorburger.

So if you’re looking for one of the best burgers in Windsor Essex, then make sure you try Motorburger located in Windsor’s Little Italy on Erie Street. 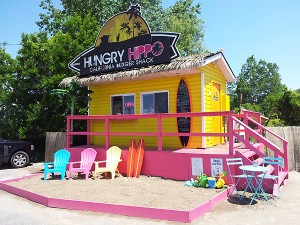 Now there’s good news and bad news when it comes to The Hungry Hippo California Burger Shack. You see, this humble road side burger stand was situated in a small parking lot filled with bright colorful picnic tables, sun umbrellas, and a bamboo fence in the Town of Tecumseh. Their big juicy burgers were full of flavour and made from simple, natural, chemical free, anti-biotic free, nitrate-free, organic ingredients. They had a wide range of signature burgers to choose from or you could build your own burger with a wide selection of far out toppings. Why choose ketchup when Hungry Hippo toppings include organic alfalfa sprouts, Hawaiian BBQ sauce, mango salsa, green olives, grilled pineapple in addition to a wide selection of mainstream toppings like beef steak tomatoes, green leaf lettuce, nitrate-free hickory smoked bacon, and real cheddar cheese.

The burgers at The Hungry Hippo are worthy of being on my Top 3 Burger Restaurants in Windsor Essex. The bad news is they have closed down operations and are selling their property. The good news is once sold they have plans to seek out a bigger venue and will re-open again. You see, word spread about their amazing burgers and they simply outgrew that location. As of right now we have not heard anything about the new location but you can rest assured that we love their burgers so much we’re eagerly awaiting the news.

So there you have it our top 3 burger restaurants in Windsor Essex. Of course, as mentioned earlier, this is a biased list based on our own experiences. There are others we think that make an amazing burger too. For example, we recently tried Sandy’s Select Sirloin Burger at Sandy’s Riverside Grill. This juicy burger comes topped with sauteed onions and mushrooms, melted provolone, lettuce and tomato. In my restaurant review of Sandy’s Riverside Grill I named this burger as being worthy of being in the Top 5 burgers in Windsor Essex. In addition, there are other burger restaurants our friends and associates have suggested to us that we haven’t tried yet.

Our friend Cathy Gaudry (AKA Lunch Reporter) and Steve (owner of Classic Shuttle) both tell us that The Walkerville Tavern has some of the best burgers in the city. In addition, Moe Tousignant (AKA Big Dude Likes Food) made several suggestions when we asked him. Firstly, Moe says, “you definately nailed the top two with Motorburger and Jacks.” Moe then went on to suggest Gilligans because you can get things like turkey, lamb, buffalo and ostrich burgers. He hasn’t tried but has heard, as have we, that The Twisted Apron makes excellent burgers because their ingredients are fresh and sourced locally. Finally, Moe had a lot to say about Bubi’s Awesome Eats on University.

“I would mention Bubi’s for their wide range of made to order burgers, the Hindenburger, and the Bunda’s Big 8 burger (if you can finish this huge 8 pound burger you’ll win $1,000). Also worth noting that you can get TVP (vegitarian patty) burgers instead of meat.”

Next week we will get to see what a panel of judges at Windsor Essex’s First Ever Burger Festival will choose as The Best Burger in town. That event takes place June 15 & 16, 2013 at the Riverside Sportsmen’s Club. The panel of judges, headed by Ted Whip (The Windsor Star’s food journalist), Amanda Ferguson (Host CBC News at 6 and 11), Lisa Xing (Video-journalist at CBC Windsor), Makda Ghebreslassie (Video-journalist at CBC Windsor), Phil Giacalone (General Manager at Canadian Tire on Tecumseh Road East), Steve Barrett (General Manager of Canadian Tire on Walker Road), and myself Eric Bonnici (Eyes on Windsor) will decide.

Now, we would love to hear your thoughts on who has the best burger in Windsor Essex

Go ahead and let us know by commenting below…