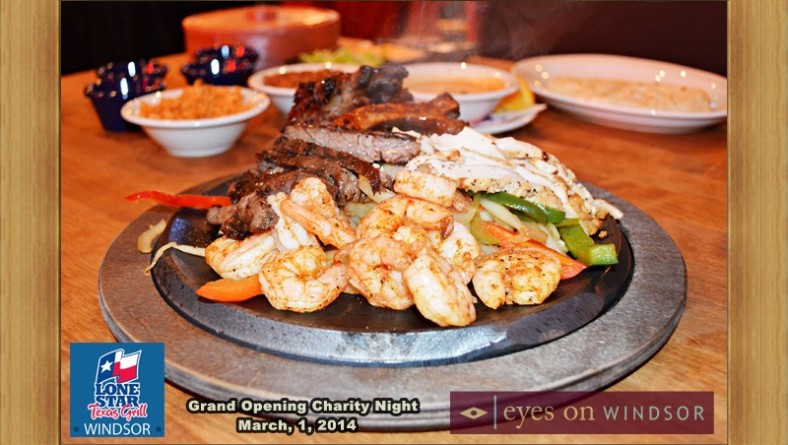 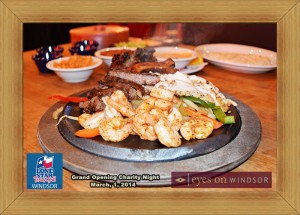 If you’re fixin’ to eat up true Tex-Mex grub served in a charming cowboy style setting with down home Southern hospitality then we reckon you head on yonder to the Lone Star Texas Grill in Windsor. The first Lone Star Texas Grill restaurant in Windsor Essex officially opened to the public on Thurs. Mar. 6, 2014. Located at 4140 Walker Road this is the 19th Lone Start Texas Grill restaurant operated by the Lone Star Group of Companies to open in Ontario since 1986. The restaurant was originally founded in Ottawa by the late Val Belcher and Larry Brune, both Texans who signed as Canadian Football League players with the Ottawa Rough Riders. The pair couldn’t find a single restaurant that served the authentic Tex-Mex food they loved from back home so they opened their own. Lone Star Texas Grill is known for famous fajitas, mesquite grilled steaks, fall of the bone BBQ ribs, and their signature Lone Star Margaritas. 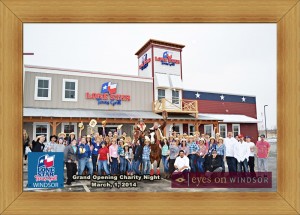 An invite only Charity Grand Opening event was held at Lone Star Texas Grill Windsor on March 1, 2014. This was one of three days of pre-opening charity events benefiting local organizations. The previous two days friends and family were invited to help train the staff. Allison AKA Scout and Sue AKA Tequila (staff go by their Lone Star nicknames) contacted Eyes on Windsor asking us to join the Grand Opening hoe down. Of course we obliged and eagerly chowed down on the grub while enjoying the friendly hospitality and festivities.

The doors were graciously held open by a smiley group of polite cowboys and cowgals welcoming guests to Lone Star. Their attire included cowboy hats, button down denim, plaid, and pattern style shirts, jeans, and cowboy boots. The fabulous smell of sizzling Southern BBQ filled the foyer. Next Tequila and Scout introduced themselves and welcomed us. The friendly hospitality continued throughout the night from hosts, servers, managers, and even the chef AKA Chief who spent time chatting with patrons at their tables. 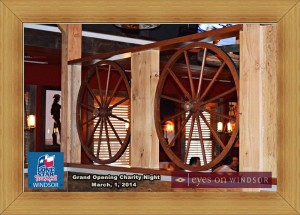 The decor is unmistakably Texas-Country Western complete with wagon wheel fixtures, cowboy hats and cowboy boots hung along the walls, comfy horse shoe shaped booths, and big bold bull horn mantles and steer skulls mounted on the walls. The lounge area features a giant 9-screen T.V. on the brick wall behind the bar with large silver Texas lone star’s mounted on dark wood planks on each side of it. Above each star Sauza Gold Tequila bar light signs were shining. In fact, over a dozen bottles of Sauza Gold lined the mantle just under the lone star on the left side of the wall. Several flat screen T.V.s hang throughout the bar lounge area. Three colorful unique rectangular light fixtures made of Corona beer bottles hang from the ceiling.

Our server for the night, a friendly young cowboy named Stunner, greeted us and explained for the charity night event they would be serving Lone Star’s Famous Fajita Fiesta, a trio of sauteed garlic shrimp, mesquite wood grilled chicken and steak, served with pork back ribs, fresh-baked tortillas and a variety of toppings and sauces.

To start complementary crisp tortilla chips and fresh salsa are always brought to guests. The tortilla chips were thin, crispy, tasted great, and are freshly baked on site in the kitchen. The restaurant is known for several menu items including the con queso, perfect for dipping the warm tortilla chips in. The con queso is a creamy three cheese blend with tomatoes and jalapenos that I really enjoyed and found flavourful with a slight spicy kick to it (unless you eat the jalapenos it is garnished with). 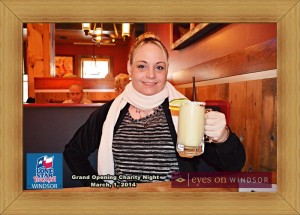 Tequila stopped by our table and told us about the signature Lone Star Margarita’s, another item the restaurant is known for. Tequila explained Sauza Gold Tequila is used in the Margaritas that are made with natural lime juice. We decided to try them and Tequila delivered the beverages to our table herself. She explained they’re served with lime and orange wedges so the Margarita’s sweet and sour flavour can be customized. Squeezing the orange gives a sweeter taste while the lime adds to the tartness. The signature Lone Star Margarita is fabulous.

The sizzling Fajita Fiesta, a specialty of the restaurant, was brought to our table by a friendly server named Cherokee, complete with warm steamy freshly baked tortilla shells. The steak, chicken, and garlic shrimp smelled fabulous. Toppings included cheddar cheese, sour cream, shredded lettuce, baked “saddle” beans, Mexican rice, pico de gallo, and perfectly grilled onions, green peppers, and sweet orange peppers. In addition, several savoury sauces included a guacamole, jalapeno relish, and chili jalapeno fire. The chili jalapeno fire sauce was our favourite because it had a slight sweetness to it with a nice spicy kick. Wrapping the toppings inside the fresh warm tortillas with the mesquite grilled chicken, mesquite grilled skirt steak, and sauteed garlic shrimp, and biting into it was a spectacular symphony of flavour. We feel Lone Star Texas Grill’s fajitas are as legendary as the menu claims. In fact, the restaurant claims their fajitas are “the best in Canada.” 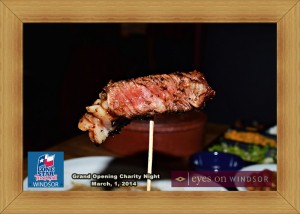 The Fajita Fiesta comes with BBQ pork back ribs cooked in either honey garlic, original BBQ, or chipotle tequila BBQ sauces. The order of original BBQ sauce pork back ribs we opted for were amazing. The meat was tender, juicy, literally fell off the bone, and was like biting into savoury bliss.

Steak lovers will enjoy Lone Star’s well-aged boneless Mesquite-grilled New York strip steak. Our server Stunner offered samples of the New York Strip for us to try. The rich smokey aroma, slightly charred outside, and juicy slightly pink inside of the steak was obviously grilled to perfection. A dash of Lone Star Texas Grill True Texas Hot Sauce, similar to Frank’s Red Hot, gave a nice kick to the steak. The meat was tender, juicy, and full of a wonderful smokey flavour.

The mesquite grilling that Lone Star Texas Grill specializes in is interesting. Mesquite is a hard wood that comes from trees found mainly in Northern Mexico and the Southwestern United States (into part of Eastern Texas). Mesquite burns slowly, gets very hot, and the smoke gives a deep smokey smell and distinct (some say sweet) flavour to grilled meats. Mesquite grilling is common in Southwestern U.S. and Texas style BBQ-ing. The mesquite grilled meats, particularly the New York Strip Steak on our visit, are definitely a must try at Lone Star Texas Grill Windsor! 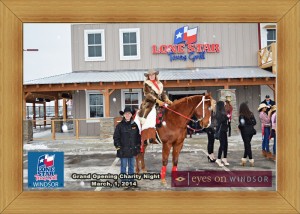 As part of the special Grand Opening Charity Night guests enjoyed the festivities happening outside the restaurant on their way out. Windsor Essex’s Michelle Stein (Firehorse Leadership Organization) and Sarah Parks (Sarah Parks Horsemanship) were in the parking lot along with two of their beautiful horses as they put thier “best hoof forward” in welcoming guests to the Grand Opening of Lone Star Texas Grill Windsor. Joining them was Nils Kravis, the president and CEO of the Lone Star Group of Companies. Sarah and Nils rode the horses through the parking lot and stopped along the way to chat with guests. According to the Lone Star Texas Grill Windsor Facebook Page over $6000 was raised over three days and donated to local charities. The organizations that benefited were Transition to Betterness, Canadian Mental Health Association of Windsor Essex, and Firehorse Leadership Organization.