Windsor, ON, (April 22, 2014) – Starting on Thursday, April 24th and throughout the following week, Jack’s Gastropub in Kingsville, Ontario is celebrating their 25th Anniversary as a leader in the local food industry.

Jack’s wasn’t always Jack’s! In fact, when co-owner Troy Loop launched the original restaurant, it was known as the Vintage Goose – a fine dining restaurant that gained critical acclaim across Ontario and Michigan for its eclectic & creative approach to dining. Each weekend hundreds of guests would flock to the restaurant to enjoy its culinary creations & local vintages. Siblings Cindy, Trevor & Tara all became part of the creative team, along with their spouses as the business expanded.

Since its inception in 1989, the team of siblings has created many complimentary businesses in the Tourism Industry. The Vintage Goose itself, evolved through several styles of cuisine & locations before finding its way to becoming today’s concept, Jacks Gastropub & Inn31. Over the years, alongside the VG Flagship, there were The Tin Goose Inn & Gooseberry’s Island Cuisine Restaurant on Pelee Island; The Piggery Gourmet Gift Shoppe; Vintage Treasures Antique Store; The Vintage Goose Inn, Aqua Spa & Jack Frost’s Ice Creamery all in Kingsville. 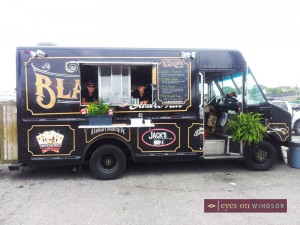 Last summer, this creative team launched another first for the area, the BlackJack GastroVan Food Truck to a resounding success. This year in the continuing creative spirit of the Loop Family they have developed Banded Goose Brewing Co, currently beginning operations as a Brew Pub in the Jacks location at 31 Division South in Kingsville. Vintage Goose began a tradition of local support when in 1990 they adopted a wine list of exclusively local vintages and have never wavered proudly serving EPIC wines exclusively to this day. This practice of Farm to Table local cuisine was the catalyst for Banded Goose Brewing Co (BgB) when last year the seed was planted with the adoption of an Ontario only Microbrew menu.

The commitment to the evolution of their ongoing culinary vision & their love for the Loop Family’s home town Kingsville has led this brothers/sisters team to succeed & thrive over the years.

Trevor Loop says, “We recognized that people wanted more of a relaxed atmosphere but also expected a culinary experience a step above your typical pub fare.” Jack’s (a namesake tribute to Kingsville’s own Jack Miner) Gastropub is a concept recognizing an English Islands’ term that’s gained popularity over the past few years and it describes exactly what Jack’s does best – a pub style atmosphere with high-quality food and drinks. The popularity of today’s location with two dining rooms, wrap around porch & outdoor patios finds customers without a reservation often either waiting or quite simply, out of luck. To assist with this dilemma a new outdoor Beer Garden Patio will open this May. Trevor says, “What we’re doing now has really resonated with our customer base. We’ve never been busier.”

Jack’s customers weren’t the only ones to notice this Loop Team was doing something right. Last summer, Food Network’s popular You Gotta Eat Here filmed an episode at Jack’s for their upcoming season. The show will air on Friday, June 6th. The filming of the show coincided with national publicity about the small-town restaurant’s success in the Globe and Mail – Canada’s largest daily newspaper.

Sibling and co-owner Tara Loop says, “We couldn’t have done it without the incredible support of our legions of ultra-loyal customers and more importantly, our dedicated employees over the years. Everyone played a part in this small town success story. It would have been impossible without them! But here we are, and we’re excited about the next 25.” The success goes beyond just a busy restaurant.

The Loop family has created literally hundreds of jobs for the town’s youth over the past 25 years and each of the siblings proudly continues to call Kingsville home.