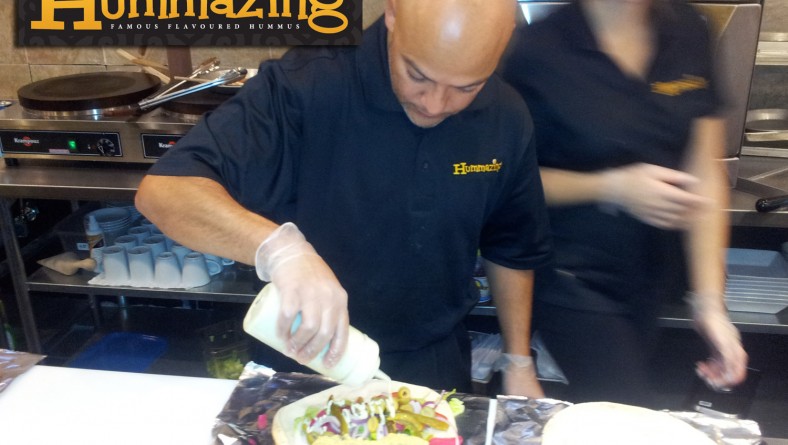 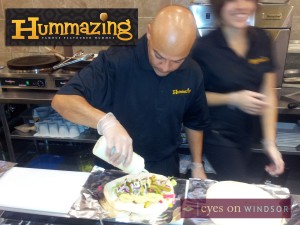 Friday November 1, 2013 marks the one year anniversary of Hummazing opening their first restaurant. To celebrate they are offering the public a chance to enter their “free hummus for a year” contest. Hummazing is already famous for their signature line of flavored homemade hummus and healthy cuisine. On November 15, 2013, the first one hundred people to enter the restaurant’s Devonshire Mall location will qualify to enter into the draw. One lucky winner will receive one 8oz container of Hummazing hummus once a week for 52 weeks. Devonshire Mall and Hummazing, located inside the mall, both open at 9:30am that day and no purchase is necessary to enter. The draw will be overseen by a third party marketing company to ensure the contest is unbiased and fair.

Hummazing had humble beginnings in the kitchen basement of Chef Rami Chatley where he produced just two flavours of hummus, traditional and hot pepper. The hummus was so amazing it evolved into a signature line of flavoured hummus and healthy food items served at area festivals and events that people called “delicious” and “fresh and tasty”. A few years later, on November 1, 2012 the first Hummazing Restaurant opened in Devonshire Mall.

This was just the beginning of a dream and vision friends and co-owners Fadi Al-Dandachi and Rami Chatley have for their restaurant. Hummazing soon became a favourite restaurant in Windsor where locals are leaving rave reviews (which can be seen on their Facebook page) and offering feedback and suggestions. Hummazing has implemented many of these suggestions into their concept successfully as evidenced by the fast growth and high demand for their menu items.

During their first year Hummazing became so popular that they moved to a bigger location, still in Devonshire Mall. While that kept them busy they also took the time to travel to Toronto where they were filmed for an episode of Dragon’s Den. The episode should air sometime this season.

When the new Hummazing location opened near Target in the mall, their Mascot Chip the Chick Pea made his debut on their new sign. In addition, an expanded menu was launched with new items like Hummazing Pies, Steak and Egg Wraps, and the Mexicana Chicken Wrap. Since then new items have been added to the menu like Quinoa Salad (for a limited time). In fact, as part of their one year anniversary Hummazing is launching their “Green Initiative” featuring Green Wraps and Burritos freshly made with collard greens and kale for another great gluten free option (same great taste without the carbs). As part of the Green Initiative Hummazing is now using recycled napkins and cardboard boxes instead of plastic or styrofoam.

Customers appreciate the homemade, fresh, tasty, and healthy aspect of this wonderful restaurant. When asked how he feels about celebrating Hummazing’s one year anniversary, Dandachi says, “We are very happy and appreciate all the local support that has come our way. We as a staff and owners have learned as each day passed us. We have streamlined many things to make our concept efficient and fast not only for our customers and our bottom line but to ensure we can move forward with franchising.” In fact, Hummazing is planning to open a new location this summer in Toronto.

Overall, Hummazing is giving people a CHOICE; a Gluten Free choice, and a choice of what type of food they want to put into their bodies. Not only are customers smiling but they are eager to post reviews about this online. Dandachi says, “customers are taking the time to sit down and write great reviews after they eat at Hummazing and that to me is the best feeling!”

When asked what is next for the restaurant Dandachi says, “Hummazing is in it’s infancy, we are moving into a whole category of fresh, flavours and new lines that will innovate casual fast dining forever!”

Eyes On Windsor would like to say congratulations on your first year Hummazing and we look forward to seeing what you bring your customers in the future!

Remember if you want to enter for a chance to win Free Hummazing Hummus for a year you have to be one of the first 100 people to visit them at Devonshire Mall on November 15, 2013 to qualify. Doors open at 9:30 am. Good luck everyone!