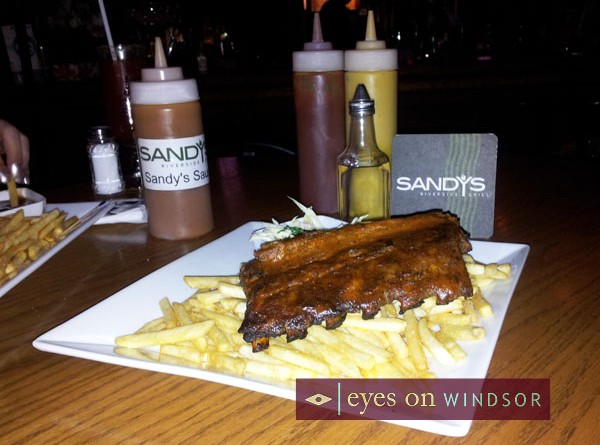 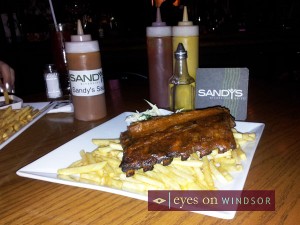 After a beautiful Saturday afternoon we decided to enjoy dinner at one of our favourite local neighborhood pubs, Sandy’s Riverside Grill. You see, it was a sunny afternoon here in Windsor Ontario and our family spent part of the afternoon doing our youngest daughter’s favourite activity, making crafts. This wasn’t any oridinary craft because it was a poster made to celebrate day 85 of the count down to the Windsor Essex International Children’s Games 2013 (WEICG2013) happening in August. Day 85 of the count down coincides with Windsor’s 121st Birthday Celebration. Once we finished the poster our family headed down to Windsor City Hall to snap some pictures with our poster. The photo will be featured on the WEICG2013 social media profiles on Facebook and Twitter that day. Next we dropped our youngest off at the grand parents who were kind enough to have her spend the night so Theresa and I could have a rare night out alone. The plan was dinner then to rock n’ roll’ all night at The Local Dive in Tecumseh. That’s where Canada’s Number One Kiss Tribute Band, Destroyer (based out of Windsor), were performing live. 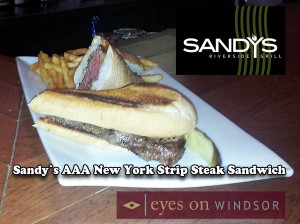 So after we dropped off our daughter we headed home towards East Windsor while discussing where we should grab a bite to eat. Theresa said she was in the mood for a good hamburger as we passed Sandy’s Riverside Grill. I told her the last time I was there with my friend Jeff, Sandy told me about the Sandy’s Select Sirloin Burger. It sounded so good that I almost ordered it but since I love Reuben sandwiches I opted for that while Jeff had the the AAA steak sandwich. His sandwich looked sizzling good and my Reuben with warm corned beef, sauerkraut, provolone, and Russian dressing was succulent. After hearing me talk about the food, Theresa said that dinner at Sandy’s sounded perfect.

As we entered the restaurant the sounds of people chatting and laughing along with the mouth watering aromas from the kitchen put our appetites into overdrive. So we sat at the only open table left in this popular neighborhood pub. 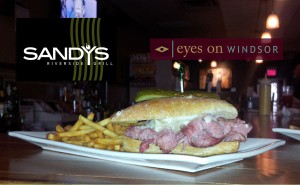 The bartender Gerry quickly came over and took our drink orders. Gerry returned with Theresa’s Caesar and my cool draught beer, delivered them with a smile, then promptly headed back to the bar.

The packed bar all seemed to want to cash out at once. Now this is our only complaint because it took quite a bit of time for Gerry to cash them out. We really wanted to order our food but no one came to take our order so Theresa decided to complain. She spoke with Rick who quickly came to our table and explained that when it gets this busy normally he or Sandy would help out with orders. They thought we were just having drinks. Minutes later Gerry had finished cashing out his last customer and was on the scene to take our order. Gerry explained the rush at the bar. 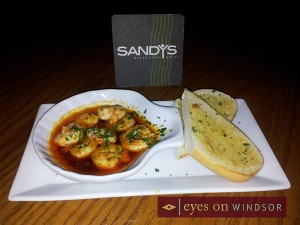 Theresa and I both worked in bars in the past and totally understand. Overall, we’re impressed how important customer service is at Sandy’s Riverside Grill and it shows in the quick response to our complaint with the owner’s husband coming over to talk with us.

So we placed our order and soon after the appetizer arrived. You could smell the incredible aroma of the Louisiana style shrimp steeped in Sandy’s savoury sauce. The shrimp were perfectly prepared with just enough Cajun spices for a comfortable spicy kick that wasn’t overwhelming. The shrimp went down fast and the toasted garlic bread that it came with was nice for dipping into the left over juices.

Of course our meals arrived next. Theresa ordered the huge half pound Sandy’s Select Sirloin Burger. It came topped with sauteed onions and mushrooms, melted provolone, lettuce and tomato. The order came with fries and Theresa asked for a side of gravy as well. Now you might already know I love a good burger so Theresa offered me a bite. This was an incredible burger full of flavour and the patty was obviously made with a fresh prime cut of meat. In fact, I would have to rank this burger in the Top 5 that I’ve tried in Essex County so far. 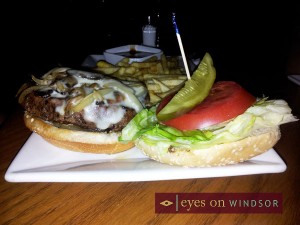 Personally, I’ve wanted to try the Authentic Coney Dogs at Sandy’s for quite some time. I almost ordered them but it was Saturday night and I went with the nights special, slow roasted BBQ back ribs. Quite simply, I’m glad I did because these were some of the most mouth watering fall of the bone ribs I’ve ever had. In fact, all the food at Sandy’s is always truly tasty. This is surprising since the menu is extremely diverse and great food is not always common in small neigbourhood pubs. Obviously, the almost 20 years of experience in the business and use of fresh quality ingredients has a lot to do with it. Getting back to the ribs, they were so tasty and succulent that you could eat them just as they were served but I did top them with Sandy’s BBQ Sauce. Now this is a truly tasty sauce that is similar in taste to what you get at the Tunnel BBQ or Riverside Tavern. Simply a perfect compliment to the ribs.

The friendly atmosphere and exceptional service made our Saturday night meal at Sandy’s Riverside Grill something we’ll definitely tell our friends about. Speaking of friends as we approached the bar to pay for our meal we saw my younger brother’s old friend with his girlfriend. Now I hadn’t seen him in years so we chatted. While chatting Rick came over to ask how our meal was. It’s always nice when the owners husband is making sure their guests had a good experience. As we talked with Rick the topic of Wine on Tap came up. Wine on Tap? Really? As it turns out Sandy’s is the first in Windsor Essex to have wine on tap. Their wine comes out of a bag, not a keg or canister, which keeps the air out. This ensures the wine stays fresh and tasty.

According to Rick, there’s only a few restaurants in Ontario who offer wine on tap from a bag. Wine on tap is an innovative and responsible way to reduce environmental waste because it reduces the need for bottles and corks. The question is how does it taste? Well Theresa and I decided to sample the wines. While we are far from connoisseurs we can say the red Amarone was a good full bodied wine. The white Pinot Grigio was crisp with a hint of sweetness and spice. Who would of thought wine on tap could be so good? 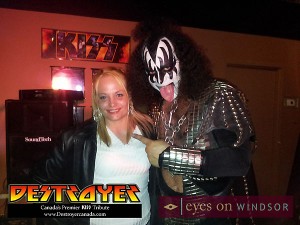 It was getting late so we had to rush off to our next adventure. Yes it was time to head to Tecumseh so we could enjoy Destroyer Canada performing live. This strictly Kiss music playing tribute band based out of Windsor Ontario is lots of fun to watch. There’s something about the rock n roll, fire, make up, and costumes that gets everyone on their feet. Thanks to Sandy’s Riverside Grill we enjoyed the show with full and satisfied bellies.

So the next time you’re looking for a cozy place to eat good food, enjoy great service, and experience an all around friendly atmosphere in East Windsor, then I highly recommend that you try Sandy’s Riverside Grill. There’s few places that truly live up to their motto and Sandy’s is one of them… Good Food. Good Friends.