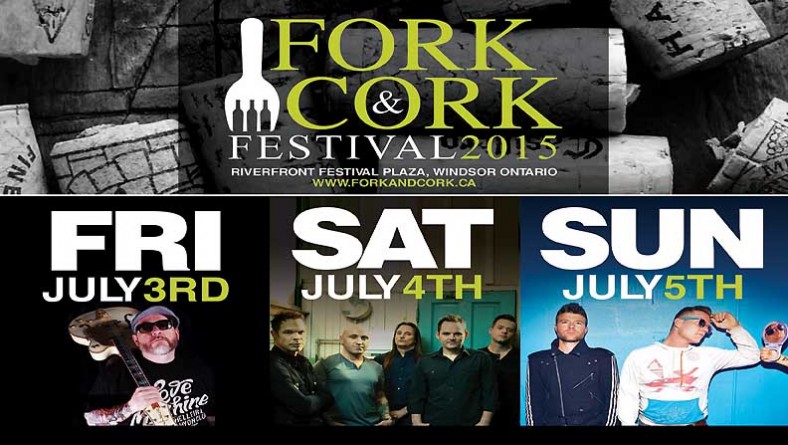 Organizers of Windsor Fork and Cork Festival have announced exciting enhancements for 2015 including an incredible lineup of local bands opening for national and international headline acts. This year the festival will feature three big headliners instead of two.

Organizer Chris Mickle of Protenders and The Dominion House Tavern says, “Fork and Cork is 100% local, except for our headliners. We utilize international headliners to draw people to the festival to hear our local talent.”

Mickle and his team have put together an impressive line up of bands featuring Everlast, Big Wreck, and U.S.S. Ubiquitous Synergy Seeker.

“The band is thrilled to be part of this amazing festival and share a stage with so many amazing artists,” says SiereaSlave drummer Siera Simoni. 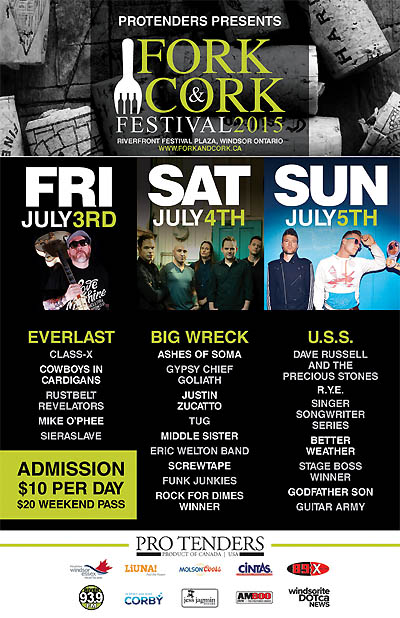 Everlast will take the stage on Friday, July 3

After a successful run with House Of Pain, Everlast shocked the musical world in 1998 with the release of his solo album Whitey Ford Sings The Blues. A blues, folk, country and rap inspired release on which Everlast sang in a gravely voice, the collection was anchored by the smash hits “What It’s Like” and “Ends” and sold more than 2 million copies.

Since then, Everlast has become one of music’s most successful, eclectic artists, collaborating with legendary rock group Santana on the Grammy-winning single “Put Your Lights On” and forming the hardcore rap group La Coka Nostra with former House Of Pain member DJ Lethal, among others.

Big Wreck will take the stage on Saturday, July 4

Big Wreck has excited fans with their unique signature rock sound since the mid ninties, a decade after disbanding they’re back together with no signs of slowing down. Their album Big Wreck Albatross debuted at #5 on the Top 200 SoundScan chart in Canada and hit #25 on the US Billboard HeatSeekers chart. The album’s lead single “Albatross,” also made Big Wreck the first Canadian band to hit #1 on the Canadian rock radio chart in over a year, a position they maintained for six weeks. Quite the feat considering they had just returned from a near decade long hiatus. 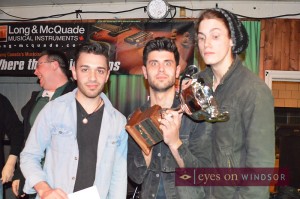 The Justin Zucatto band was last year’s winner and Rock For Dimes Windsor 2015 takes place at The Dominion House Tavern on May 29. Bands interested in particpating can find out more here.

Ubiquitous Synergy Seeker will take the stage on Sunday, July 5

The unique duo of Ashley Boo-Schultz (vocals/guitar) and Human Kebab on the turntables give life to the unique sounds of U.S.S. The USS Music website says, “like a science experiment set to music, what they do melts down acoustic rock, EDM, Dub, Hip-Hop, Orchestral, and Pop transforming it into an entirely new element. It explodes, it implodes, and it is a pure chemical reaction.”

Local bands performing on the Fork and Cork stage before U.S.S. include Dave Russel and The Precious Stones, R.Y.E., Better Weather, Godfather Son, Guitar Army, the winner of the Stage Boss competition, and artists involved with the Fork & Cork Singer Songwriter Series.

Stage Boss presented by Blackburn Radio and The Dominion House Tavern is hosted by Red Legacy’s Christian Vegh. The competition is an open mic show intended to foster & support up and coming local talent and took place the last Wednesday of the last several months at The Dominion House Tavern. The finals take place in late April where the winner will win several prizes including the opportunity to perform at Fork and Cork 2015.

The Singer Songwriter series at The Dominion House Tavern, presented by Fork and Cork takes place the third Thursday of every month. The event features a gathering/forum for singer/songwriters in The Windsor Region to play and share their craft in an effort to grow as a Musical Community here in Windsor. Artists involved with the series will perform in unison at this year’s festival.

Fork and Cork will support the annual Rock Me Anaphylaxis 5k run featuring Windsor’s The Funk Junkies performing live at the finish line. The finish line is located on site at the Fork and Cork Festival. The event is tentatively scheduled for the morning of Saturday, July 4, 2014. The purpose of this family fun event is to raise allergy, asthma and anaphylaxis awareness.

The Tea Party Band is Back (Windsor Fork & Cork Festival 2014)

Last year’s highlight was Windsor’s very own Tea Party. The band re-united after splitting up over creative differences for several years. In this video lead singer, Jeff Martin, proclaims to thousands of hometown fans that, “Windsor we are your Tea Party, we are your Tea Party, and we are back baby, we are back!” Over 8000 excited fans at Riverfront Festival Plaza in Windsor, Ontario, cheered wildly for the re-united trio of Jeff Martin, Stuart Chatwood, and Jeff Burrows on July 5, 2014.

About Windsor Fork and Cork Festival

This will be the fourth year Windsor Fork and Cork Festival returns showcasing the best art, music, wine, and culinary delights that windsor Essex County has to offer, including culinary based demonstrations and presentations.

In 2014 over 26,000 people attended the festival which was impressive for a third year event. As the momentum of this festival continues to build along with enhancements planned for 2015 organizers are setting their goal on over 45,000 attendees.

Save the date because the fun takes place at the Riverfront Festival Plaza July 3-5, 2015.

Organizers say capacity is limited this year but entry is guaranteed by pre purchasing a weekend pass/wristband. Pre sale Admission prices are $10 on Friday, Saturday and Sunday. Gates are first come first served. The weekend pass guarantees by passing the line at the festival gate. Weekend wrist bands are available online for $20 at OurEvent.ca or in person at The Dominion House Tavern.

Children 12 and under are admitted for no charge and this is a family oriented festival before 9pm.

For more information, to become a sponsor, or vendor visit ForkAndCork.ca