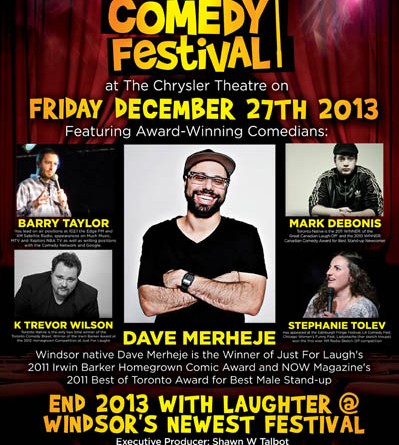 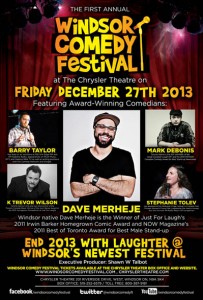 The first ever Windsor Comedy Festival will take place on December 27, 2013 in Downtown Windsor at the Chrysler Theatre.

Windsor born and Canadian award winning comedian David Meherje, “one of the edgiest comics in the country today,” will have the crowd laughing out of their seats as he headlines the show.

The event is shaping up to be another exceptional world class festival hosted right here in Windsor Essex thanks to the experience of marketing director and former Art in The Park Chair, Shawn Talbot and his team.

In addition, a charity dinner hosted by General Brock Public School with proceeds to benefit their healthy breakfast and lunch programs for students will kick off the launch of The Windsor Comedy Festival. Following the dinner friends and family alike will enjoy the last festival of the year with laughter and cheer.

Comedian Steph Tolev is a stand up and sketch comic born and raised in East York, Toronto. For six years she has been performing for audiences all over North America at events including LA Comedy Fest, North by North East, Chicago Women’s Funny Fest, Toronto and Montreal Sketch Festivals, Cleveland Comedy Festival and Edinburgh Fringe Fest. Tolev is also a member of Ladystache, a sketch troupe that was the winner of Sirius XM’s first ever sketch off competition. Known for her ability to enchant crowds and produce instant laughter you won’t want to miss her at the Windsor Comedy Festival!

As seen on A&E’s Breakout Kings, Showcase’s Billable Hours, and CBC’s Winnipeg Comedy Festival , K. Trevor Wilson will be a highlight at the Windsor Comedy Festival.
Born and raised in Toronto, Wilson is a graduate of the Etobicoke School of the Arts. Wilson began his career as a child actor before making the move to stand-up comedy.
The only two time winner of the Toronto Comedy Brawl and the 2012 Just for Laugh’s Irwin Barker Homegrown Comedian Award, Wilson plans to create waves of laughter throughout the audience.

Mark DeBonis brings a wealth of experience to the comedy floor of the Windsor Comedy Festival. Winner of the 2011 Great Canadian Laugh off, 2010 Canadian Comedy Best Newcomer Award and Yuk Yuk’s Great Canadian Laugh Off, Debonis is sure to have you laughing in your seat. Debonis has been all over North America hosting and producing multiple successful comedy shows. Featured on CBC radio’s “Cream of Comedy” for best up and coming stand-up comedian in Canada he has also made appearances on Much Music’s Much on Demand, Bite TV, Comedy Network and Sun TV. Prepare for the non-stop laughter that is Mark DeBonis.

Windsor Comedy Festival brings this Barry funny guy to town. Barry Taylor not only makes audiences laugh with his creative stand-up comedy but he is also an experienced radio D.J. and founder of Comedy Records. His record label is a collective of stand-up comedians that he promotes through album releases and live performances. In fact, K. Trevor Wilson, Mark Debonis, Dave Merheje, and Stephanie Tolev are part of the Comedy Records collective. Barry has appeared multiple times on MTV, Much Music, Raptors NBA TV, AUX TV and 102.1 the Edge FM and written for the Comedy Network and Google.

Dave Merheje returns to Windsor ready to bring the Chrysler Theatre to tears. Merheje first began his career and honed his skills across the border at Detroit’s most competitive comedy clubs and open mic nights. Today Dave Merheje is making waves as one of the edgiest comics in the country today with his Lebanese-Canadian perspective and personal experiences straight from the streets.

He is known for his “no fear” approach to comedy that earned him the 2011 honours for Just for Laugh’s Irwin Barker Homegrown Comedian Award and NOW Magazine’s Best Male Stand-up Award. He has performed for sold out crowds all over Canada and the US including Montreal’s Just for Laughs, New York Arab American Comedy Festival and the Boston Comedy Festival.

Merheje has also found success in creating and producing his own series including “Dear Dave,” a live advice column and “We Ain’t Terrorists,” a comedy revue that shatters stereotypes and analyzes today’s fear and paranoia within our society. He is ready to represent his hometown and take the Windsor Comedy Festival by storm.

Windsor Comedy Festival marketing director, Shawn Talbot, said “Creating another world class event here in Windsor is important because it promotes the capabilities of the Windsor and Essex County area throughout the entertainment world and along with all the great amenities offered by the city.”

“We’re going to be a part of the positive momentum propelling our city forward,” he added.

Area businesses are embracing this event to provide special offers and packages to those attending. Working with the support of the Downtown Business Improvement Association (DBIA), has given way to develop unique partnerships to offer better value to attendees.

Kicking off the launch of the Windsor Comedy Festival will be a charity dinner hosted by General Brock Public School with proceeds going towards their breakfast and lunch programs for students. The dinner will be available to the public and will be held the same night as the festival.

Anne Adamson, Principal of General Brock Public School said “We are very happy to be partnering with the Windsor Comedy Festival to host a charity dinner for a great cause and event. It is important that our students have healthy breakfasts and lunches available to them to go along with their studies.”

During the holiday season family, students, and friends return to Windsor to celebrate together and often ask what is there to do? With this first time event now scheduled for the end of December 2013 the region now has a great venue and event they can enjoy together with laughter and holiday cheer. End 2013 with laughter at the area’s newest event, Windsor Comedy Festival 2013, it’s a fabulously funny gift for the holidays!