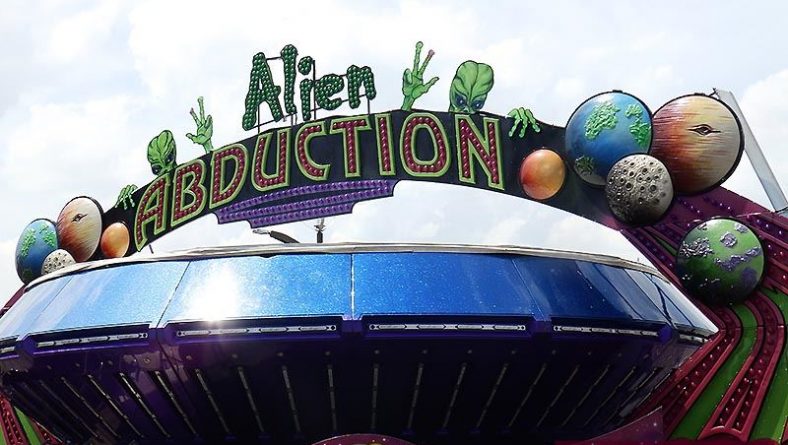 The proof of the success of a family summer festival is the children’s smiles. At this year’s running of the popular downtown Windsor Summerfest at Riverfront Festival Plaza, the smiles, figuratively, stretched for miles.

(Space age Alien Abduction midway ride at Windsor Summerfest transports its riders to a galaxy far, far away. Photo above by Robert Tuomi / Eyes On Windsor.) 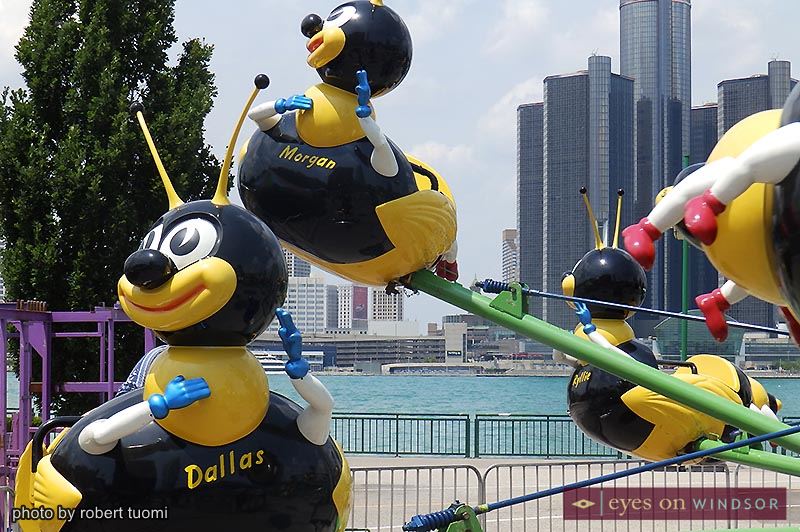 Each of the Bubble Bees’ carnival ride compartments at Windsor Summerfest had its own unique name. Photo by Robert Tuomi / Eyes On Windsor.

There is much for children and adults to do with a full range of games of chance and rotating rides. Aside from the ever popular amusements, like the Scrambler and bumper cars, there are a few new twists on popular themes including the eerie looking Alien Abduction.

Riders tell Eyes on Windsor that once inside, gravity forces the kidnapped passengers up against an ever faster rotating wall giving the impression they are travelling to another galaxy, far, far away. 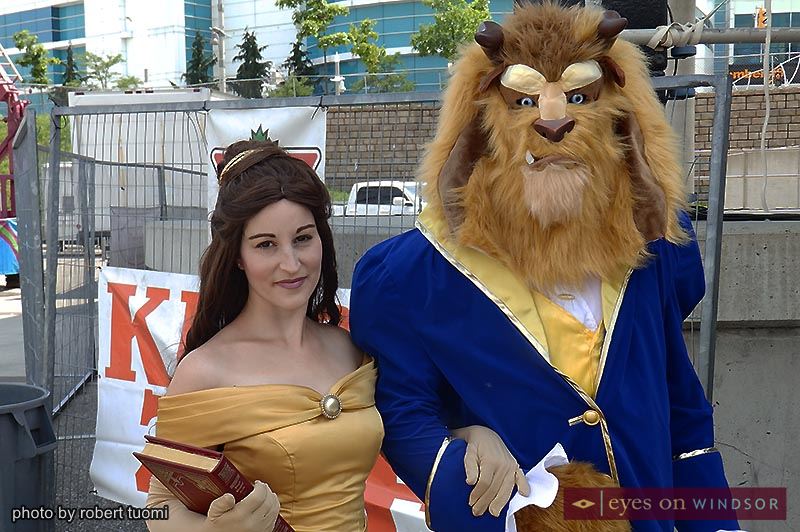 It was a hot day at Windsor Summerfest, especially for an actor named Harold (right), from Enchanted Adventure Parties, dressed in a Beast costume and accompanying the beautiful Sylvia Ward, aka Beauty (left). Photo by Robert Tuomi / Eyes On Windsor.

Outside on the midway children were greeted by such entertaining characters as Beauty and the Beast. Apparently, some found the Beast a bit scary at first, but, quickly delighted in meeting such a famous character, one of many from Essex-based Enchanted Adventure Parties.

Next Saturday the company will send Cinderella and Snow White to the riverfront and on Sunday Zarina the Pirate and a mermaid will be on hand to delight the youngsters. 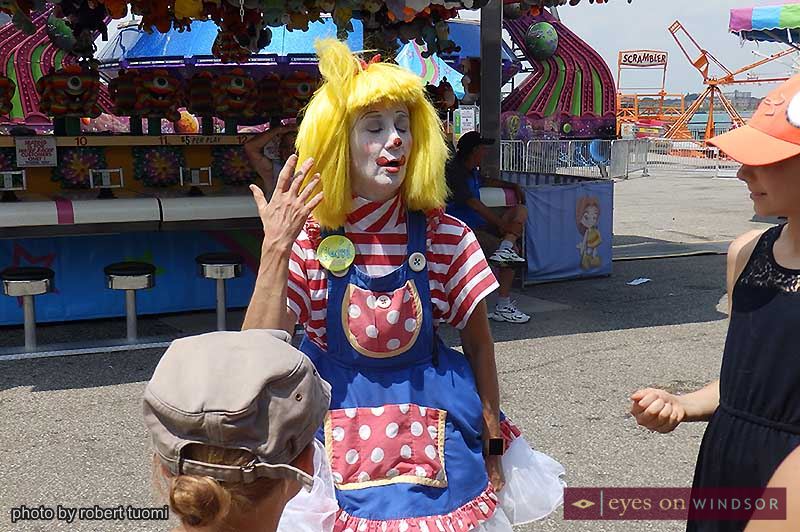 Clarol The Clown was quite nonchalant about her special magical abilities at Windsor Summerfest. Photo by Robert Tuomi / Eyes On Windsor.

Weekends will also see clowns, like Clarol, in attendance. Clarol is not an ordinary clown, her ability to make things appear out of thin air mystified young and old. The only plausible explanation, it was simply magic.

Sunday was a day of blistering heat. World’s Finest Shows, operator of the midway, set up cooling stations providing refreshing water sprays. One of its staff members was seen busily delivering cold bottles of water to ride operators and the barkers. 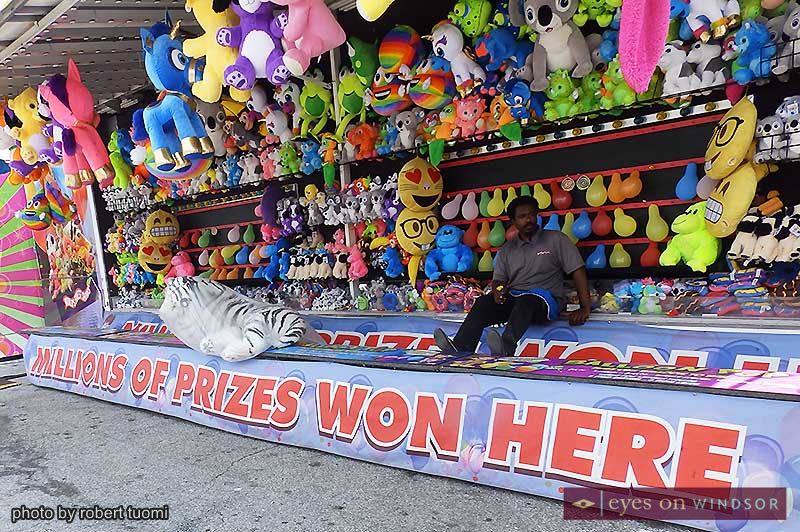 “Wraskly Wrabbit” offered a prized white Siberian Tiger – wrapped in plastic – to anyone who could pop 500 of his balloons at Windsor Summerfest’s carnival game. Photo by Robert Tuomi / Eyes On Windsor.

A highlight of any carnival has to be the barkers with their quirky comments attempting to attract attention to their games. Most keep their identities private, using nick names. Wascally Wabbit operated a booth known as Fantasy Toyland where prizes could be won simply by popping a balloon or two. Really good poppers, who could pop at least 500, could take home an almost life-sized stuffed white Siberian Tiger.

And if 500 busted balloons might seem too much of a challenge, an adjacent stand offered a hoover board as the top prize. A carnie revealed that he had given a number of the boards to lucky gamers.

Summerfest has also put together a series of shows on the Riverfront stage. On Sunday the Royal Scottish Country Dance Society was showing off their jigs and other folk dances. The group is based at Mackenzie Hall in Sandwich Town. 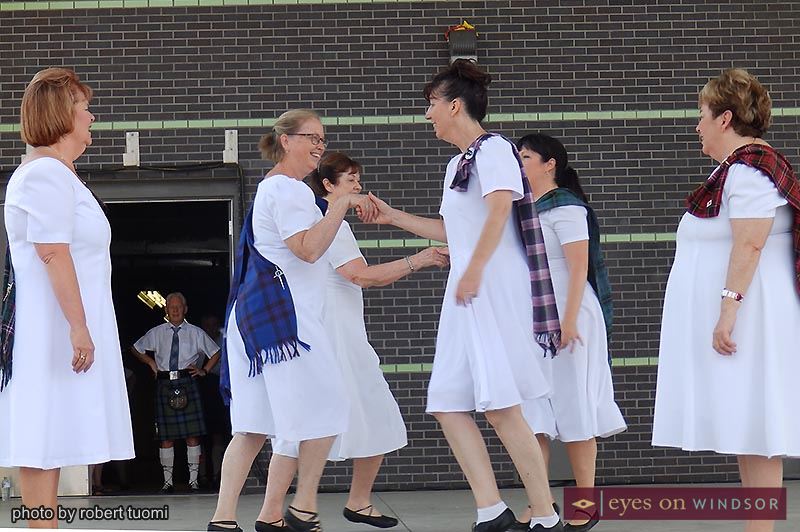 Sunday, being Father’s Day, was special at the Festival. Dads were offered free rides as long as they were accompanied by a paying child.

Many parents were lined up with their offspring at the midway’s food concessions. At Pluckin’ Potatoes the most popular item was not potatoes but chicken tenders. 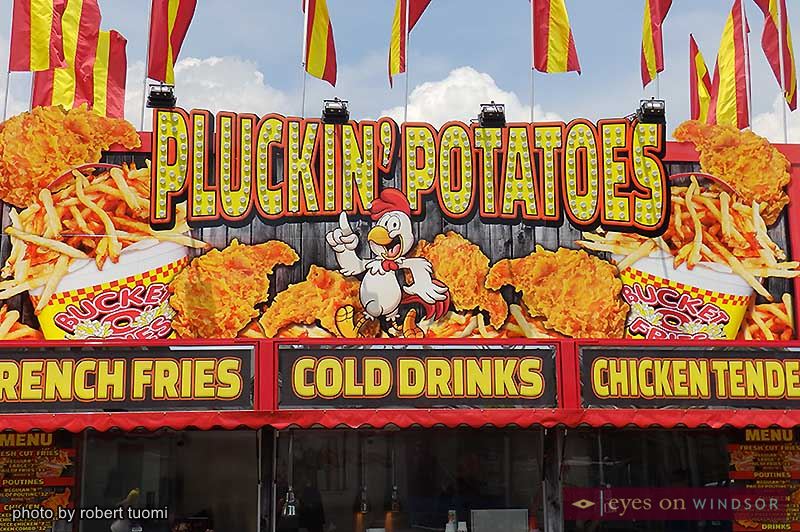 Pluckin’ Potatoes served up a lot of chicken, despite its name at Windsor Summerfest. Photo by Robert Tuomi / Eyes On Windsor.

Rides are offered on a coupon basis starting at 10 for $18 up to 40 for $55. Most rides require three coupons, two in the children’s section. Summerfest will continue until July 1 opening Monday to Friday at 4pm – 3pm on June 25 – and at noon on Saturday and Sunday.

For those who, by chance, miss the show they can catch up to it. On July 2, the carnival will pack up and head to Essex Centre for its annual Essex Fun Fest from July 5 to 8 at the Essex Fairgrounds, 60 Fairview Avenue.