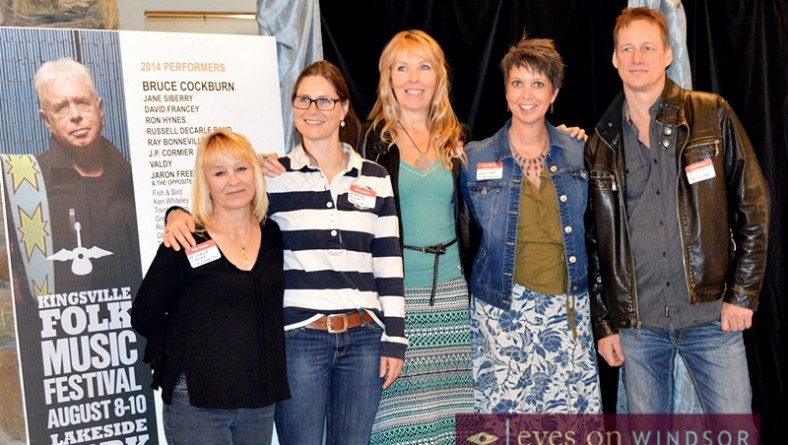 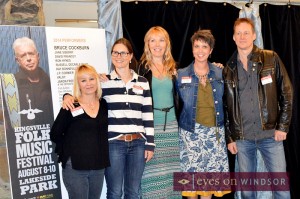 Organizers of the first ever Kingsville Folk Music Festival are not only bringing award winning Canadian musical acts to the area but they’re creating good vibes around the community.

Heinz workers in Leamington experiencing difficult times have caught those positive vibes. Festival organizers and musicians Michelle and John Law donated 800 tickets for the Saturday night to Rhonda Chroba and Scott Jackson representing Heinz workers at a press conference at the Lakeside Park Pavilion in Kingsville on May 2.

The Laws recognize that when workers are laid off they will eliminate dining out and live entertainment from their budgets first. Now Heinz workers and their families, along with everyone who attends the festival, will get to experience a fun filled weekend and first class live entertainment. 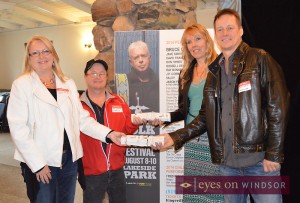 Surprisingly, putting together the festival wasn’t that difficult considering that organizers have heard of other festivals have had challenges when approaching town counsels. When organizers approached the The Town of Kingsville, one of the official sponsors, the timing was perfect. Kingsville had just finished putting together an arts and culture master plan. “They had canvased the town as far as what they would like to see as a major event and people said they would like to see a folk festival so we walked right into it,” explains Michelle.

Putting the fantastic line up of performers together wasn’t that difficult either. The Laws know and have performed with almost all of the musicians in the past. “We called in some favours and all the performers and booking agents want to see a new venue for this region,” says Michelle Law. Typically, a folk music tour of Canada passes through Montreal, Toronto, London, and then down to the States. “Sadly, arts wise we are considered a remote area of Ontario and we’re trying to change that,” says Michelle. For this reason the excitement among performers and booking agents is high. 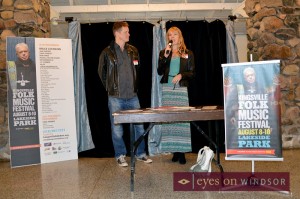 The diverse line up made up of all age performers will have something that appeals to both old and young audiences no matter what genre of music they’re fans of.

“Folk music is about seventeen different genres of music as far as we can figure out, from blues and country to rock, there’s a lot of music that usually doesn’t come to this area and we’re excited to bring it here,” says John Law, “the performers have won 26 Junos, 3 Orders of Canada, and headliner Bruce Cockburn is also an Officer of Canada so that’s a lot of heavy forward thinking artists coming to our area.” 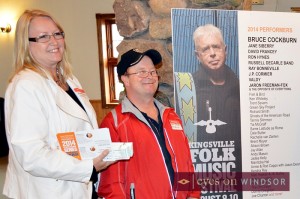 “Bruce Cockburn has always been a restless spirit. Over the course of four decades, the celebrated Canadian artist has traveled to the corners of the earth out of humanitarian concerns—often to trouble spots experiencing events that have led to some of his most memorable songs. Going up against chaos, even if it involves grave risks, can be necessary to get closer to the truth.” (source BruceCockburn.com)

Michelle Law commented on the long list of award winning Canadian musical acts, “It just goes to show how respect they are in the field of music in Canada. I think that’s what’s really important too, that we’re really trying our first year to highlight Canadian artists. Over 80% are from Canada because we have so many creative artists that most haven’t heard of.” 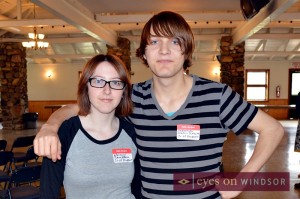 Over 35 performers are lined up for the Kingville Folk Music Festival including Jane Siberry, David Fracey, Ron Hynes, and The Russel Decarle Band. Children’s performers have been booked as well including Fred Penner, Magoo, Ben Hassenger, and Washboard Hank. The festival held at Lakeside Park in Kingsville will host 5 stages where the performances will take place.

There is a lot of excitement and buzz about the Kingsville Folk Music Festival. Committee member Marjan Willett simply states, “The buzz is just buzzing its absolutely amazing.” It’s not just Kingsville either that is excited. Surrounding areas are included and organizers want this to be a county wide event. The Comfort Inn in Leamington is taking part and will be housing some of the performers. In addition, Tourism Windsor Essex and Pelee Island, another major sponsor, recently promoted the region in Kitchener/Waterloo and tweeted, “the people of Waterloo are definitely interested in attending the 1st annual #KingsvilleFolkFest!” 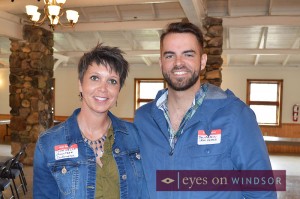 Area bed and breakfasts are involved. Benjamin Leblanc-Beaudoin, owner of the Iron Kettle Bed and Breakfast, is excited to be preparing meals for several hundred of the performers and volunteers each day showcasing the local Essex County foods. “We’re going to be able to do some fun stuff with what’s from around here,” explains Leblanc-Beaudoin, “it’s like heaven for chefs.” Benjamin is a well travelled chef who has work all around the world. He has worked at Michellin star restaurants rated by the best-known European hotel and restaurant reference guide, and The Four Seasons in Geneva, one of the most expensive hotels in the world.

EPIC Wineries and Pelee Island Winery are on board as sponsors. Pelee Island served wonderful wine and cheese at the May 2 press conference. In addition, local wines and beer, local artisans, and local food vendors will have areas set up throughout the festival. 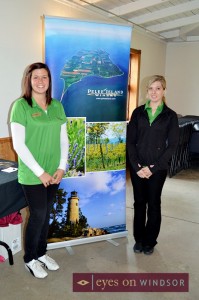 Festival founders, John and Michelle Law, established the non profit society, the Sun Parlour Folk Music Society in 2012. The mandate of the Society is to raise funds through a concert series and the annual Kingsville Folk Music Festival, to provide funds for area youth to access the arts. The MAY FUNd (Music and Arts for Youth) is available to financially disadvantaged youth in Essex county for lessons, workshops, and mentoring.

The festival is on track to become a destination event and world-class folk music festival, promoting not only Kingsville, but all of Essex County. Overall, there is a lot of good vibrations as the Inaugural Kingsville Folk Music Festival, taking place August 8-10, approaches. For more information, to volunteer at the event, or to purchase tickets visit KingsvilleFolkFest.org