Organizers of Kingsville Folk Music Festival 2015 are bringing more award winning Canadian musical acts to the area while creating good vibes around the community for the second year in a row.

When the Inaugural Kingsville Folk Music Festival was announced last year organizers amplified the initial good vibes created in the community by generously donating 800 tickets to laid off Heinz workers. In addition funds raised from a pre-festival concert series and both the inaugural and second annual festival help financially disadvantaged youth participate in music and arts programs. Specifically through the MAY FUNd (Music and Arts for Youth). 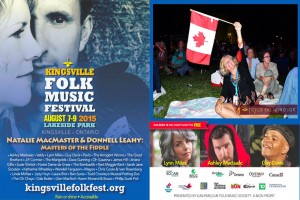 The MAY FUNd was established in 2013 by the non-profit Sun Parlor Folk Music Society. A portion of the proceeds from the annual festival and concert series is allocated to assist financially disadvantaged children, enabling them to access the arts through volunteer opportunities, mentoring, lessons, workshops, and the annual MAY FUND scholarship founded in 2014.

The MAY FUNd Scholarship was established for area high school students, to assist in their collegiate or university studies, enabling growth and creativity in the performing arts; music, dance, theatre and film.

For the first time scholarship funds will be officially presented to the students at the Kingsville Folk Music Festival on Saturday, August 8, 6pm at Lakeside Park in Kingsville, Ontario

“Two candidates stood out,” said Michele Law, Producer. “They each displayed exemplary skills and dedication to the development of the Arts. Our Board of Directors voted unanimously to offer this Scholarship to both deserving applicants; Shae Anderson and Nicholas Abbruzzese from Harrow and Kingsville respectively.”

For 2015 the Kingsville Folk Music Festival is picking up more good vibrations by expanding the MAY FUND with support from Tim Horton’s and Anna’s Flowers of Kingsville. Producer Michele Law is ecstatic! “With the added support of Tim Horton’s and Anna’s Flowers this year, we are looking to expand the MAY FUNd by putting together an application package and working with regional arts groups and individuals to connect eligible and deserving youth.”

Essex County area Tim Horton’s will be on site over the weekend, with 100% of coffee sales going towards the MAY FUNd (Music and Arts for Youth). Add to that, Anna’s Flowers of Kingsville, is giving a certificate with savings on purchases as well as 20% of the sale donated back to the MAY FUNd. The certificate from Anna’s Flowers is part of the goodie bag, which the first 2000 families through festival gates will receive.

This year’s festival brings more great vibes with a fun entertainment lineup for both kids and grown ups too.

The Children’s Stage, sponsored by Windsor law firm Greg Monforton and Partners, gets the fun for kids started on Saturday at noon and Sunday at 1pm: Jangles the Clown: Magic Show and Balloon Artist; last year’s favourite wildly-dressed Magoo; local legend Dale Butler will teach kids of all ages to play the guitar in just 2 minutes and young and old will be on their feet stomping and making noise with Karen Morand.

Todd Crowley’s Musical Petting Zoo, in demand at festivals across North America, will be set up all day Saturday and Sunday for kids to walk the zoo of musical instruments, see the instruments up close and enjoy a hands on experience.

Other activities for kids include face painting, crafts and workshops and the chance to design and paint your own festival t-shirt!

Sunday, join the entertainers in the musical parade to Main Stage for the start of evening performances.

Organizers have booked Natalie MacMaster and Donnell Leahy: Masters of the Fiddle, as headliners of the second annual Kingsville Folk Music Festival.

Winner of two JUNO awards, eleven East Coast Music Awards and nominated for a Grammy, with a career spanning over 25 years, Natalie MacMaster has released 11 albums and is an Order of Canada recipient. A charismatic performer in great demand, she has collaborated with artists as diverse as Yo-Yo Ma, Alison Krauss, Jesse Cook, and Bela Fleck. Above all else, Natalie stresses, “I play Cape Breton fiddle.”

The oldest brother of the internationally acclaimed family musical group Leahy,
Donald Leahy is no stranger to the awards podium; the Leahy family are recipients of three JUNO Awards. Widely recognized as one of the best Celtic fiddlers in the world, his high-energy playing style also makes him a highly popular performer.

ONE is their official first full recording as a duo. “When we married in 2002, we felt there would be some recording project in our future, but we didn’t realize it wouldn’t happen until 2014!,” says Natalie. “Six children later, we’ve finally documented our musical growth together.” “This will be our first performance bringing their entire family with them.” says Michele Law, Festival Producer. “This really highlights the fact that we’re a family friendly event … on both sides of the stage!”

The second annual festival promises to be as magical as the first, with music that will thrill all tastes at Lakeside Park, which is located in Canada’s southern most town of Kingsville, Ontario.

The festival takes place August 7-9, 2015 at the picturesque setting of Lakeside Park in Kingsville, Ontario and is nestled on the shores of Lake Erie, with major tourist destinations such as Pelee Island and Jack Miner Bird Sanctuary nearby.

Kingsville Folk Music Festival is a project of the non-profit Sun Parlour Folk Music Society. A portion of the net proceeds from the festival and concerts support the May FUNd (Music and Arts for Youth). A detailed schedule, tickets and more information is available at
www.kingsvillefolkfestival.org