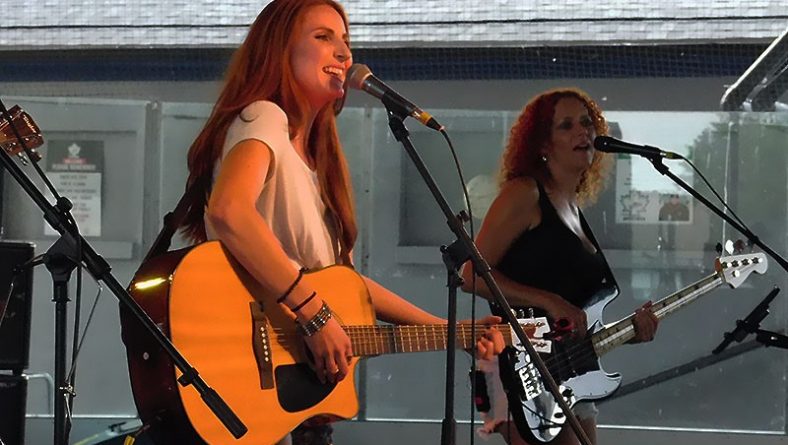 (Windsor Essex native Kelsi Mayne enchants with a singing style that is taking Nashville by storm during the Chaps and Spurs Country Music Festival at Lanspeary Park in Windsor, Ontario, on Saturday, August 18, 2018. Photo above by Robert Tuomi / Eyes On Windsor.)

For the second year in a row, Windsor’s legion of country music fans had something to sing about. This year’s Chaps and Spurs Country Music Festival brought real talent to the stage at Ottawa Street’s Lanspeary Park. Oddly enough two of the main acts are actually homegrown.

In an exclusive interview with Eyes on Windsor, organizer Joe Garon, of Turnkey Entertainment and Promotions, was beaming from head to toe. Last year’s inaugural, despite a promise of rain, exceeded expectations. Saturday, right in the middle of the three day weekend event, was doing even better. The gathering crowds did nothing if not prove Garon’s bet a good old fashioned country festival is just what the city needs. 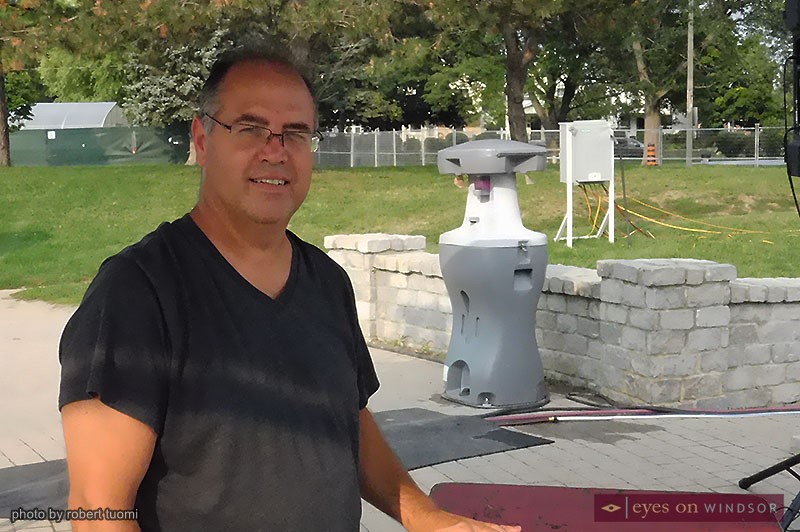 Organizer Joe Garon kept the music playing while his guests dined on food truck options during the Chaps and Spurs Country Music Festival at Lanspeary Park in Windsor, Ontario, on Saturday, August 18, 2018. Photo by Robert Tuomi / Eyes On Windsor.

And he was right, as cowboy boot wearing fans lined up to get front row seats to hear Kelsi Mayne’s Saturday evening concert opener in the Libro Credit Union Main Stage. Mayne’s music video, “Still Not Over You,” released last year, is currently a YouTube favourite. In May the popular song was followed with, “Your Jolene.”

With a remarkably clear voice, Mayne’s ability to hit even the highest notes is chilling. While her roots are so country – they have echoes of great country artists in every one of her songs – one exception might be Still Not Over You. It does have a decided pop sound which she admits does question whether she is a country singer or a pop tunesmith. To prove her country credentials, she headed into a string of covers and original material which left no doubt as to why she is a rising star in Nashville, including her Woman Waiting now getting radio airplay.

Currently the Windsor native spends her time in the Tennessee city and Toronto and is pursuing both a singing and acting career. These days you can also find her on the road with a number of the industry’s top acts including Florida Georgia Line and Tim McGraw.

With her over-abundance of talent, coupled with her sparkling personality, there is no doubt she will soon be travelling in the lead bus. Not bad for a girl who only seven years ago was singing her heart out at Windsor’s Bull and Barrel. 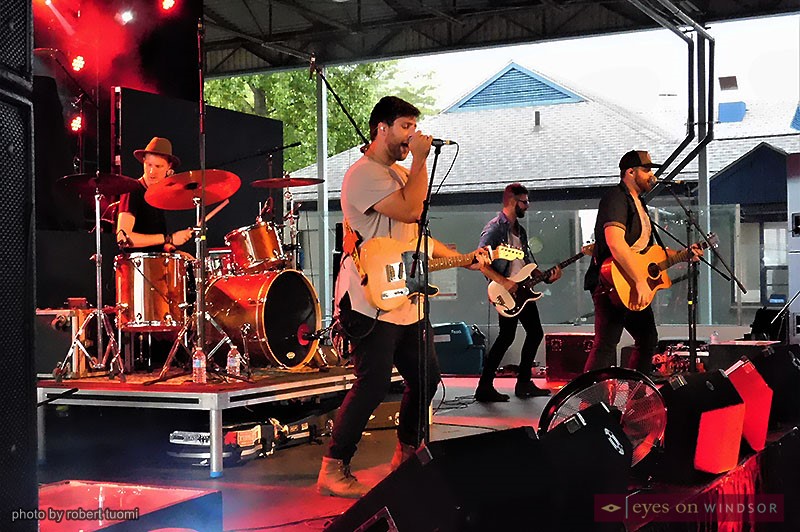 Buck Twenty kept the energy at the highest level during the Chaps and Spurs Country Music Festival at Lanspeary Park in Windsor, Ontario, on Saturday, August 18, 2018. Photo by Robert Tuomi / Eyes On Windsor.

Next Buck Twenty took the stage and never turned off the energy button. Fronted by the singer/songwriter duo of Harrow’s Mike Ure and LaSalle’s Aidan Johnson-Bujold, the popular group is winning considerable industry notice for its unabashed effort to prove you can be country and you can rock.

Although music was a big part of the weekend, Garon added a number of attractions including Saturday afternoon’s Silver Stars Precision Drill Team. These youthful horse riders performed against a musical backdrop. 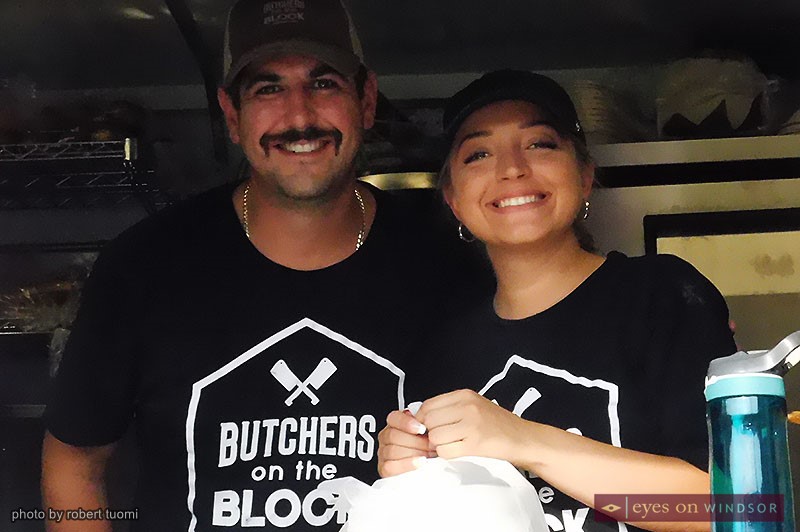 Chloe and Brian operated the Butchers on the Block Food Truck during the Chaps and Spurs Country Music Festival at Lanspeary Park in Windsor, Ontario, on Saturday, August 18, 2018. Photo by Robert Tuomi / Eyes On Windsor.

And what would a festival be without food? A collection of food trucks could be found outside the Libro stage, offering unique options, from pizza to burgers. But, over at Butchers on the Block, the big seller was pulled pork with mac and cheese. It turns out macaroni and cheese is a very popular item at country festivals. One truck, The Mac Shack, actually specializes in gourmet macaroni. 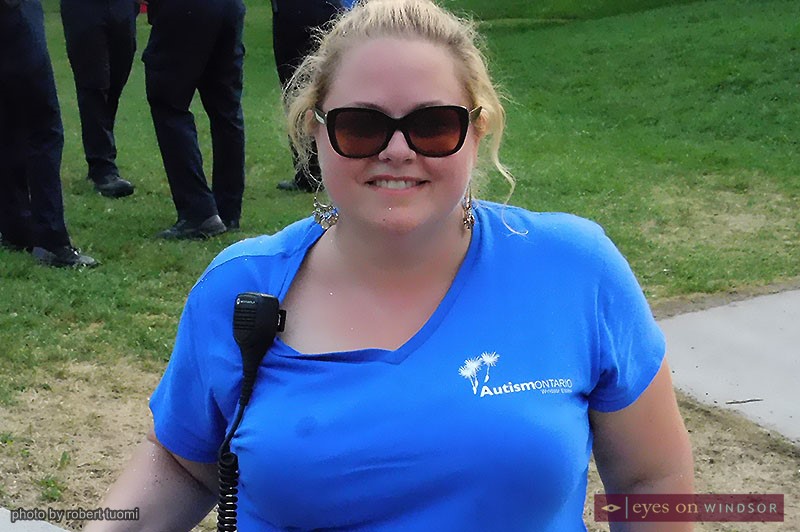 Livia Longi, of the Autism Ontario Windsor Chapter, worked behind the scenes to keep the Chaps and Spurs Country Music Festival running smoothly at Lanspeary Park in Windsor, Ontario, on Saturday, August 18, 2018. Photo by Robert Tuomi / Eyes On Windsor.

All of this was in aid of Autism Ontario. Currently, one in 66 children in the province suffer the debilitating neuro-developmental condition. It effects their ability to communicate and interact with others. Livia Longi, program manager of the local Autism Ontario chapter, says every month her organization sees on average seven new families. For some reason, Windsor and York’s chapters are the largest in Ontario.

One of the problems, she explains, is that many parents do not understand the ramifications of the condition. They chalk it up to their offspring being simply slow to develop and can miss out on the help that is available.

Events like Chaps and Spurs provides funding for the local chapter’s programs. Its chapter members also played a major role in attending to details to make the event a success, everything from ticket taking to cleaning up.

Organizer Garon, is optimistic the event will just keep on growing. Given the smiling faces throughout, he has a winner on his hands, one able to benefit both country fans and the local community.