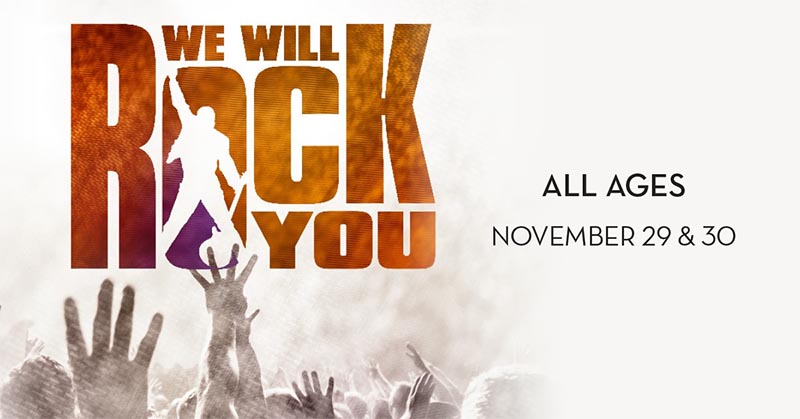 We Will Rock You The Musical by Queen and Ben Elton brings their wildly popular international tour to Caesars Windsor for three incredible shows on November 29 & 30, 2019.

We Will Rock You is a quirky, eccentric and heartfelt story of outsiders who fight for freedom, individuality and the rebirth of rock n’ roll. It reflects the scale and spectacle that marked Queen’s live performances and earned the band its pinnacle position in rock history.

This theatrical production follows two revolutionaries, Galileo and Scaramouche, on a quest to save rock n’ roll in a post-apocalyptic world where there are no musical instruments and rock n’ roll has died. They join a small group of societal outcasts, the Bohemians, as they fight to take back the iPlanet from the all-powerful Globalsoft, led by the Killer Queen.

Since 2002, over 16 million theatregoers in 19 countries have been thrilled by this awe-inspiring production which is based on the songs of Queen with a book by Ben Elton. Hit songs include: “We Are the Champions,” “Radio Ga Ga,” “I Want To Break Free,” “Bohemian Rhapsody,” “Another One Bites The Dust” and, of course, “We Will Rock You.”

Did You Know… Windsor native and recent University of Windsor bachelor of fine arts acting program graduate Sean Sennette joined the cast of We Will Rock You early last summer and will be performing during this show. A real treat for his hometown family, friends, and fans.

Don’t miss your chance to see the Queen-inspired musical We Will Rock You live on The Colosseum Stage!