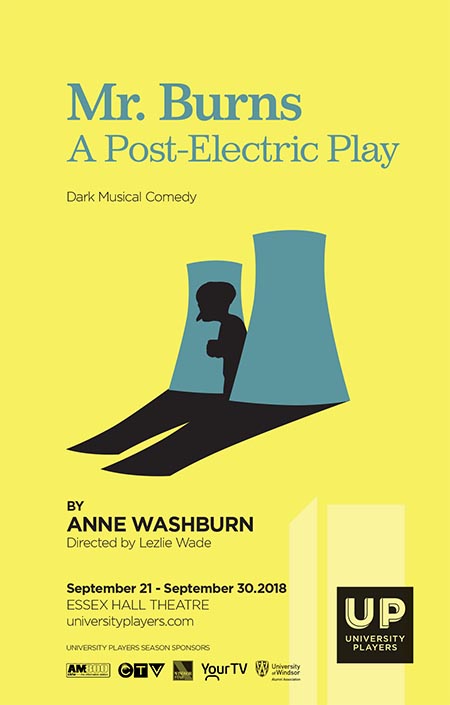 Mr. Burns is a story about the way in which shared memory and collective storytelling become myth.

The time is the present. The world’s electricity has been wiped out by massive devastation. In this post-apocalyptic world, strangers become allies as they struggle to survive, using shared memories of The Simpsons to connect to one another and find solace in desolation.

Not just for fans of the long-running animated series, it is a musical tribute to the modern mythology of pop culture and a darkly funny exploration of a post-electric existence.

Essex Hall Theatre is located on the University of Windsor campus on the corner of Wyandotte and Patricia.

“You needn’t be familiar with The Simpsons to enjoy! Burns is just great fun!” – San Francisco Chronicle

“…an intellectual rush, a sense of unexplored theatrical possibility…and the massive pull of shared experience.” – The Chicago Tribune 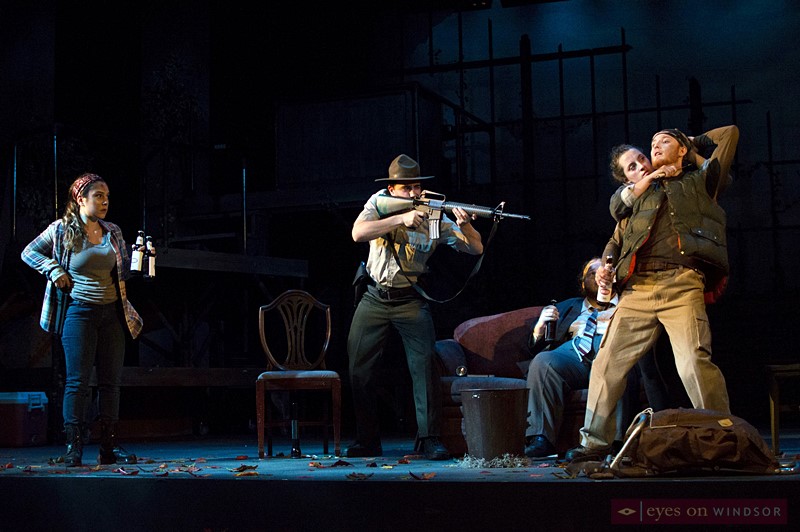 Cast members of UP Windsor’s production of Mr. Burns, from left to right, Serena Paesano, Sean Sennett, Matt Maddison, Shayla Hudson, and Brady Madsen, during a dress rehearsal for members of the media at Essex Hall Theatre on Tuesday, September 18, 2018. Photo by Eric Bonnici / Eyes On Windsor.

University Players will host their popular Let’s Talk Theatre Lunch and Discussion Series at Willistead Manor on September 26, 2018. This lunch and discussion series features impressive three-course lunches and entertaining and informative guest speakers presented at Windsor’s cultural gem, the stately Willistead Manor. You will have time to mingle and enjoy the company of your friends, old and new, over lunch; and afterwards join in a discussion with special guests about University Players production or Mr. Burns.