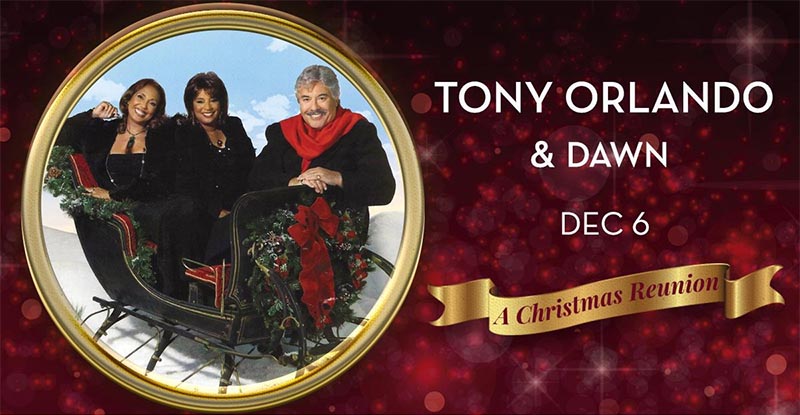 The bestselling trio from the 1970’s, Tony Orlando & Dawn, bring their special holiday show, A Christmas Reunion, featuring all their hits and Christmas favourites to The Colosseum stage at Caesars Windsor on Thursday, December 6, 2018.

Loved by millions for over three decades, Tony Orlando & Dawn (Joyce Vincent and Thelma Hopkins) rank among the Top 100 Billboard Magazine artists of all-time and are responsible for such hits as, “Tie A Yellow Ribbon ‘Round The Ole Oak Tree,” “Knock Three Times,” and “Candida”. The trio had 15 Top 40 hits, including one of the best-selling singles of all time (Tie A Yellow Ribbon), two American Music Awards, three Grammy nominations and a hit television variety show from 1974-1976.

Tony Orlando is one of America’s most endearing iconic stars. Few entertainers have excelled in so many areas as Tony has as a top selling recording artist, songwriter, concert headliner, network television star, actor, Broadway performer and author.The show will feature their festive versions of holiday classics such as of “The Christmas Song”, “Ave Maria”, “Silent Night”, and their original holiday hit “Christmas in New York.”

Don’t miss your chance to ring in the holidays with all your favourites with Tony Orlando & Dawn live!