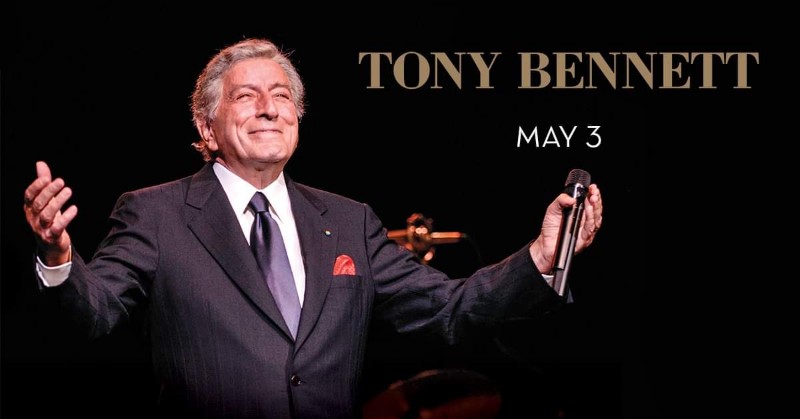 One of the greatest singers of all-time, Tony Bennett brings his I Left My Heart Tour, with very special guest Antonia Bennett, to The Colosseum stage at Caesaes Windsor on Sunday, May 3, 2020.

Tony Bennett’s passion for music and charismatic stage presence has made him an icon for generations of fans. The I Left My Heart Tour celebrates the 70th anniversary of his professional recording career, when his first record, Boulevard of Broken Dreams in 1950 as a newly signed artist to Columbia Records.

At the age of 93, Tony Bennett is not slowing down. He is one of only a handful of artists to have new albums charting in six decades and introduced a multitude of songs into the great American Songbook that have since become pop music classics. He has had 24 songs in the Top 40, including; “I Wanna Be Around”, “The Good Life”, “Fly Me To The Moon”, “The Way You Look Tonight”, “Who Can I Turn To (When Nobody Needs Me)?”, and his signature song, “I Left My Heart In San Francisco” which garnered his first two of 19 Grammy Awards. His many Grammy Awards include collaborative wins with other chart-topping artists with Lady Gaga, Steve Wonder, Amy Winehouse and k.d. lang.

With worldwide record sales in the millions, and dozens of platinum and gold albums to his credit, Tony Bennett is a musician who touches the hearts and souls of audiences with his legendary vocals and is a true giant of jazz and popular music.

His long list of achievements includes the prestigious Grammy Lifetime Achievement Award, a Kennedy Center Honoree, an NEA Jazz Master and a recipient of the United Nation’s Humanitarian and Citizen of the World honors. In 2017, his artful singing earned him a Gershwin Prize from the Library of Congress, making him the first non-composer to be given this prestigious award, making this artist a true international treasure.

Throughout his career, Tony Bennett has put his heart and time into supporting humanitarian concerns and joined with Dr. Martin Luther King in the historic Selma march in 1965. His many charitable works include raising millions towards Diabetes, and lending his artwork to raise funds for the American Cancer Society. In 1999, Tony, with his wife Susan Benedetto, founded Exploring the Arts (ETA) to strengthen the role of the arts in public high school education.

Bennett will be joined in concert by his daughter, Antonia Bennett, who has been touring with her father and will open the performance with a collection of jazz and pop standards.