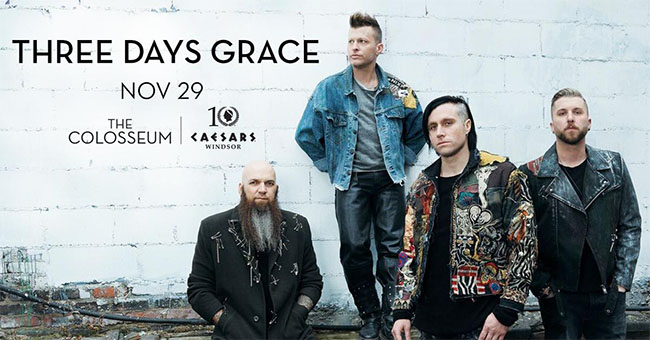 Canadian alternative hard rock and post grunge band Three Days Grace bring their on “The Outside Tour” with special guests Nothing More and Bad Wolves to The Colosseum stage at Caesars Windsor on Thursday, November 29, 2018.

Three Days Grace, the internationally acclaimed and multi-platinum Canadian band with over a billion streams on Spotify, has staked a spot amongst the elite hard rock bands. They have broken records, toppled charts and made history by holding the all-time record for “most #1 singles at Active Rock Radio ever” with 14 songs as well as earning two BMIs, several Juno nominations and multiple Billboard awards including “#1 Rock Artist of the Year”.

Finding international fame with their 2003 hit “I Hate Everything About You”, Three Days Grace has continued with hit after hit success from all of their six albums, including “Never Too Late,” “Animal I Have Become,” I Am Machine” and “Pain”. Their recently released #1 single “The Mountain” is featured on Outsider, their sixth full-length album and fifth consecutive charting Top 40 debut on the Billboard Top 200 album chart. The band remains “one of the most listened to rock bands in the world” on Spotify.

“As cool as it is to tour and experience the world, there’s nothing better than going coast-to-coast for all our fans here at home. Can’t wait!” – Neil Sanderson, Three Days Grace Drummer

The concert starts at 7:30 pm with opening acts Nothing More and Bad Wolves.

Nothing More performs a blend of progressive rock, explosive heavy metal and soaring, radio-ready alt-rock. The San Antonio-based band has just been nominated for three Grammy Awards, including “Best Rock Song” and “Best Rock Performance” for its single “Go To War”, as well as “Best Rock Album” for the recently released The Stories We Tell Ourselves which debuted at #3 on the Billboard Rock Albums chart.

Metal and progressive rock super-group Bad Wolves has dominated the #1 spots on mainstream as well as Rock and Metal charts around the world with their cover version of The Cranberries’ “Zombie”. The song’s video has garnered an astounding 20 million views, has reached 3.2 million streams and hit #3 on Spotify’s Viral Global Top 50. The band released their debut full-length album, Disobey, earlier this year hitting No. 22 on Billboard’s Top 200.

Tickets start at $30 Canadian. $1.00 per ticket will be donated to World Vision.

For more information or to purchase tickets please visit https://www.caesars.com/caesars-windsor/shows/three-days-grace