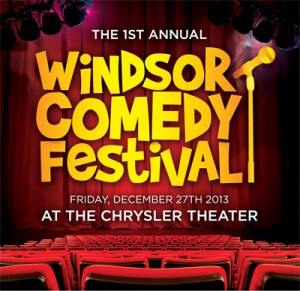 The Inaugural Windsor Comedy Festival takes place at the Chrysler Theater on December 27, 2013 featuring a line up of award winning Canadian comedians. This festival is the first of its kind and joins the roster of exceptional festivals hosted by Windsor and Essex County.

Friends and family alike will enjoy the last festival of the year with laughter and cheer. As a great way to release stress from the past year, the Windsor Comedy Festival will provide a great night as we prepare for the New Year and what better way than to have a collective laugh.

Kicking off the launch of the Windsor Comedy Festival will be a charity dinner hosted by General Brock Public School with proceeds going towards their breakfast and lunch programs for students. The dinner will be available to the public and will be held the same night as the festival.