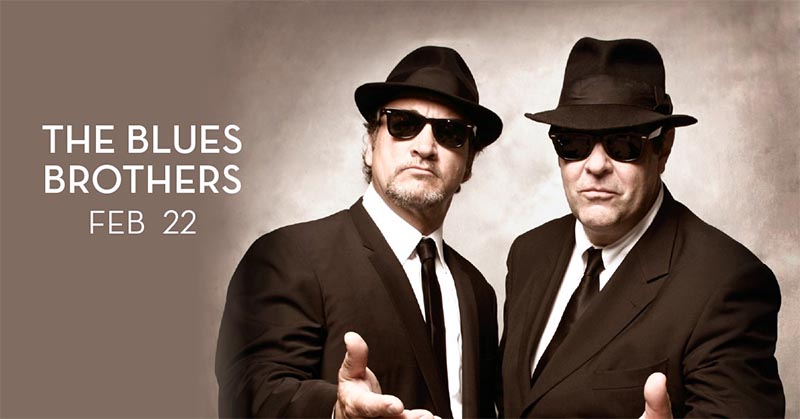 With their famed sunglasses and swagger, the one and only Blues Brothers, featuring Dan Aykroyd and Jim Belushi, will bring their comedic and musical talent to The Colosseum stage at Caesars Windsor on Saturday, February 22, 2020.

The Blues Brothers started in 1978 with their national television debut on Saturday Night Live with their breakthrough rendition of Sam and Dave’s classic “Soul Man”. It was an overnight sensation that catapulted the duo to the heights of stardom. “Soul Man” sparked a national summer tour, two platinum albums and the landmark feature film, The Blues Brothers.

Now Dan Aykroyd and Jim Belushi, younger brother of the late John Belushi, carry on the tradition of a high-energy, authentic, rhythm-and-blues show with a South Memphis accent and an East Texas kick. The duo is joined by Belushi’s band, the Sacred Hearts, bringing fans to their feet with such songs as “Messin’ with the Kid”, “Soul Man” and “Sweet Home Chicago”.

Over the course of their career, the Blues Brothers have released over a dozen studio albums and live albums, including high-charting albums like Briefcase Full of Blues (1978), The Blues Brothers: Music from the Soundtrack (1980), Made in America (1980), and Best of the Blues Brothers (1981). Some of their most popular songs include charting singles like “Rubber Biscuit”, “Gimme Some Lovin'”, “Who’s Making Love” and “Everybody Needs Somebody to Love”.

Akyroyd is also known for his roles in Ghostbusters, Trading Places, and Grosse Pointe Blank, while Jim Belushi was most recently seen in the new series of Twin Peaks. Aykroyd and Belushi have full acting careers and assorted business ventures, but still make time to play with the band, keeping its music and those Blues Brothers center stage.

Don’t miss your chance to see The Blues Brothers live!