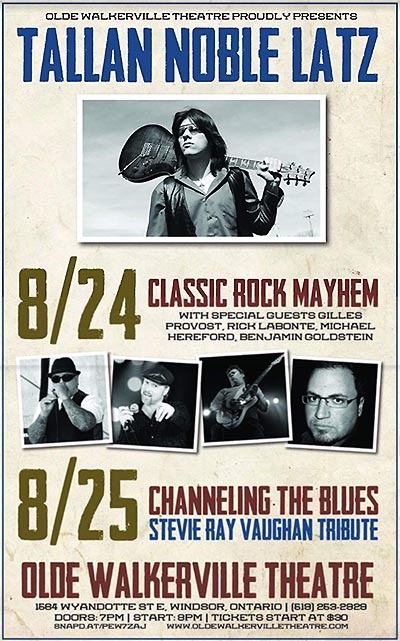 Turning 19 years old in September, Tallan has been playing music since the age of 3, picking up the guitar for the first time at 4 and finally getting serious about the guitar at age 5. Tallan has led his own band (The Tallan Noble Latz Band) since the age of 7. Tallan takes his musical prowess and mixes it with his unbelievable stage presence to create a musical experience that very few entertainers at any age can achieve.

Everyone is talking about this young dynamic guitar playing wizard who possesses an old musical soul. As one reporter put it, ¨When T-Man takes the stage, people stop what they’re doing and collectively stare. People entering the room look up and stop as if their shoes were suddenly glued to the floor, not moving again until the song is over, when they reflexively break into wild shouts and applause. Everyone is saying the same thing… You gotta see this PHENOM called T-Man!!!¨

Here’s what people are saying:

Jackson Browne: “Are you kidding me, did you just see that?”
Joe Bonamassa: “You’re a true prodigy!”
Buddy Guy: “Tallan is amazing on guitar!”
Les Paul: ” I didn’t expect that! You passed the audition!”

Tallan was Ranked #3 in the world as a must see guitarist under the age of 18!

Saturday night:
Tallan and the band will be opening the event with Tallan’s Channeling The Blues Event followed by Tallan’s Stevie Ray Vaughan Tribute Event.

Doors open at 7pm and show starts at 8pm sharp!
Tickets are $30 each night.

There will also be VIP tickets for this Saturday night show as well with scheduled activities kicking off at 4pm.
VIP will include:
Guitar Clinic
Meet n Greet with the band
Early entry for sound check
and some extra merchandise.

For more information or to purchase tickets contact the Olde Walkerville Theatre at https://www.oldewalkervilletheatre.com/events/tallan-noble-latz-live