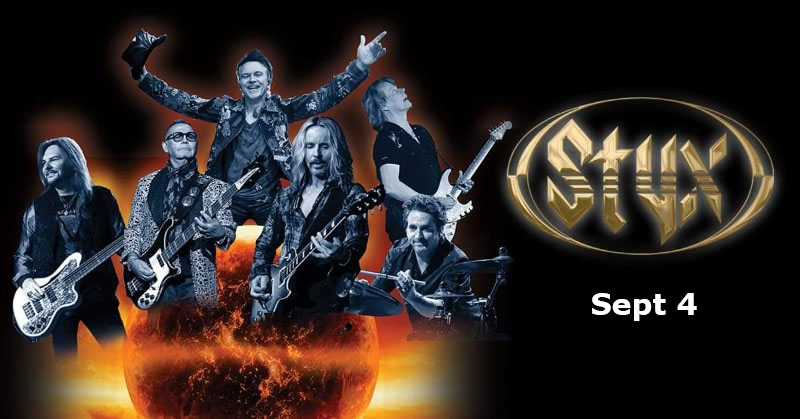 The multi-platinum, popular rock band, Styx, brings their chart-topping hits to The Colosseum stage at Caesars Windsor, originally scheduled for May 21 the show has been rescheduled to Friday, September 4, 2020.

Cancelled: Due to the current global health crisis as well as government imposed travel and performance restrictions, Styx’s show on September 4 at The Colosseum at Caesars Windsor has been canceled. This very difficult decision was made following the recommendations of government authorities to reduce the spread of the coronavirus disease (COVID-19). Refunds are available through your original point of purchase.

Known for their fused, pop rock sound featured in hits like “Come Sail Away”, “Renegade” and “Too Much Time On My Hands”, Styx gained breakthrough recognition with the album “Crystal Ball” in 1976. Shortly thereafter, the band became the first group to score four triple-platinum albums in a row with “The Grand Illusion”, “Pieces of Eight”, “Cornerstone” and “Paradise Theater.”

Spawned from a suburban Chicago basement in the early ’70s, Styx eventually transformed into a virtual arena rock prototype by the late ’70s and early ’80s, due to a fondness for big rockers and soaring power ballads. Over the years they produced 16 Top 40 US singles, eight of which broke the Top 10, including “Blue Collar Man”, “Lady”, “The Grand Illusion” and so many more.

After years of releasing notable albums, playing sold-out concerts and establishing separate solo careers, Styx most recently released “The Mission”, their sonically sweet 16th studio album in 2017. The album is the band’s most ambitious work to date and explores the concept of the first manned mission to Mars with singles such as “Radio Silence” and “Gone Gone Gone” to “Red Storm” and “Mission to Mars”.

Styx is undoubtedly one of Rock & Roll’s greatest live bands, playing over 100 shows a year to sold-out audiences around the world. With a time-tested arsenal of aurally rigorous and rewarding material, the band draws from over four decades of chart-topping hits, joyous singalongs and hard-driving deep cuts, earning the reputation as one of the best bands to see live. With 16 studio albums, distinct arrangements, pitch-perfect harmonies and an explosion of rock theatrics, Styx has reached international stardom.