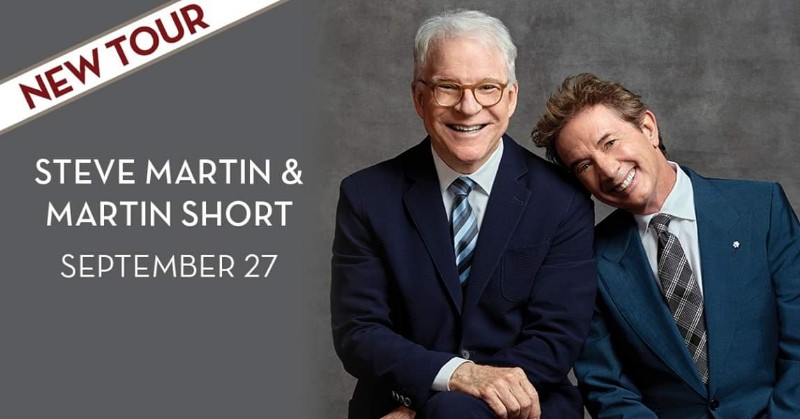 Veteran comedians Steve Martin and Martin Short bring their new tour “Now You See Them, Soon You Won’t” to The Colosseum stage at Caesars Windsor on Friday, September 27, 2019.

This celebrated comedy show redefines the form in unexpected and profound ways, from two of the funniest, most influential and acclaimed talents of the past century.

Now You See Them, Soon You Won’t follows Steve Martin and Martin Short’s sold-out tour An Evening You Will Forget for the Rest of Your Life. The tour was filmed for a Netflix special that earned rave reviews and garnered four Emmy® nominations. Fueled by comedic precision and anchored in a lifelong friendship, Rolling Stone called the special “wryly hip but unexpectedly touching,” with the New York Times describing it “gleeful and satisfying.” Steve Martin and Martin Short’s humor is often subversive, but it is always a joyous self-deprecating romp from two comedy masters driven to make each other laugh as much as the audience. The jokes come at you at a rapid-fire pace with little set-up and big punch lines as they mock Hollywood and the fickle nature of celebrity, but the comedy truly soars when they lovingly (and relentlessly) roast each other.

Martin and Short’s chemistry and timing on stage reflects a friendship of more than three decades; they met for the first time on the set of the 1986 film Three Amigos. The comedy icons have been touring together since 2016, when they launched their first live show titled “A Very Stupid Conversation.”

Steve Martin is one of the most well-known talents in entertainment. His work has earned him an Academy Award®, five Grammy awards, an Emmy®, the Mark Twain Award, and the Kennedy Center Honors.

As an author, Martin’s work includes the novel An Object of Beauty, the play Picasso at the Lapin Agile, a collection of comic pieces, Pure Drivel, a bestselling novella, Shopgirl, and his memoir Born Standing Up. His play Meteor Shower premiered on Broadway in 2017 in a production starring Emmy Award-winner Amy Schumer, Keegan-Michael Key, Tony Award-winner Laura Benanti; and Alan Tudyk, and directed by four-time Tony Award-winner Jerry Zaks.

Martin Short, a celebrated comedian and actor, has won fans and accolades in television, film and theatre since his breakout season on Saturday Night Live over 30 years ago. Short won his first Emmy in 1982 while working on Canada’s SCTV Comedy Network, which brought him to the attention of the producers of SNL. He became an SNL fan-favorite for his portrayal of characters such as Ed Grimley, lawyer Nathan Thurm and “legendary songwriter” Irving Cohen. His popularity and exposure on SNL led Short to cross over quickly into feature films. He made his debut in Three Amigos and followed with Innerspace, Three Fugitives, Clifford, Pure Luck and Tim Burton’s Mars Attacks.

One of Short’s most memorable roles was in the remake of Father of the Bride as Franck the wedding planner, a role he reprised a few years later in Father of the Bride Part II. Short lent his voice to the animated film Madagascar 3 and Tim Burton’s Oscar-nominated Frankenweenie. An accomplished stage actor, Short won a Tony, Theatre World Award and an Outer Critics Circle Award for his role in the revival of Little Me. He was also nominated for a Tony and took home an Outer Critics Circle Award for the musical version of Neil Simon’s The Goodbye Girl.

Short co-wrote and starred in Fame Becomes Me, prompting The New York Times to describe Short as “a natural for live musicals, a limber singer and dancer who exudes a fiery energy that makes you want to reach for your sunglasses.” Short most recently appeared on Broadway in Terrence McNally’s It’s Only a Play.

A two-time primetime Emmy winner and multi-nominated for both primetime and daytime Emmys, Short returned to television in 1998 for the miniseries Merlin and host of The Martin Short Show. In 2001, he launched the popular comedy Primetime Glick and in 2010 received critical acclaim for his role in FX’s drama series Damages.

Short has also returned to SNL as host three times,and performed in the series’ landmark 40th anniversary special in February 2015. Other television credits include Hairspray Live! Maya & Marty, Mulaney, How I Met Your Mother and the critically acclaimed PBS series Cat in the Hat Knows a Lot About That. Short’s New York Times bestselling memoir, I Must Say: My Life as a Humble Comedy Legend, was published in 2014.

In 1994, Short was awarded the Order of Canada — the Canadian equivalent to British knighthood. He was also inducted into the Canadian Walk of Fame in June 2000. In 2017 he received a Lifetime Artistic Achievement Award from the Governor-general of Canada.

Don’t miss your chance to see to Steven Martin and Martin Short live on their Now You See Them, Soon You Won’t tour! Tickets start at $58 Canadian and are on sale now!

For more information or to purchase tickets please visit https://www.caesars.com/caesars-windsor/shows/