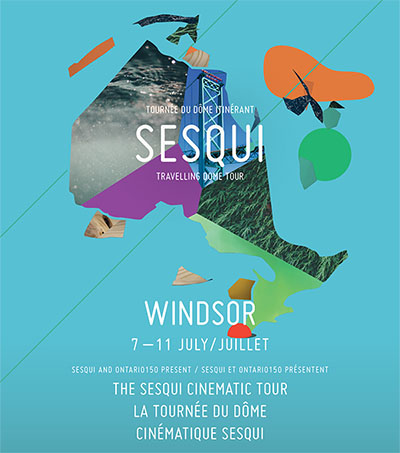 The tour will showcase the 22-minute film HORIZON, a visually stunning journey through Canada that will amplify the senses, giving audiences a front row seat to the wonders of our country.

The 360° film is a soaring visual symphony that places viewers in the centre of the action during an inspiring showcase of Canadian creative expression that unfolds from coast to coast to coast. HORIZON takes its audience on a revealing expedition from the highest peaks to the deepest seas, and through all ten provinces and three territories. Drawing upon artistic inspiration from across our country’s rich cultural mosaic, the film features traditional and contemporary creative works set in the unforgettable urban and natural landscapes of our diverse nation.

The film features over 380 on-screen performers and a soundtrack of both original and contemporary Canadian music.

Participants will take a ride on an illuminated dragon boat on the Rideau Canal and be enveloped by the spectacular Northern Lights, among 90 other breathtaking scenes.

Sesqui is short for sesquicentennial a celebration of 150 years. When the Sesqui Cinematic Dome Tour stops in Windsor you’ll see Canada like you’ve never seen it before!

Admission is free and is first come first serve. Groups of 80 people at a time will be able to watch the film which will be screened every 30 minutes (21 times per day).

The 80-seat dome will be located at Windsor’s CN Waterfront Lot near Festival Plaza and next to The Spirit of Windsor Train (located at the foot of Goyeau Ave).