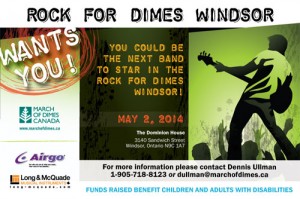 The 3rd Annual Rock For Dimes Windsor, Big Battle of the Corporate Bands, in support of March of Dimes Canada takes place May 2nd, 2014 at The Dominion House Tavern.

Come watch some of the best local amateur rock bands compete for bragging rights as the city’s best band!

2014 will be the tenth year for Rock for Dimes. Beginning with a single event in Toronto in 2004, Rock for Dimes is now March of Dimes Canada’s flagship fundraiser, with events in cities across Canada, and has raised over $800,000 to date. Rock for Dimes demonstrates what can be accomplished when good music, good fun, and fundraising are combined to help support people with physical disabilities, their families and their caregivers.

Update: Organizers of the event have informed us that Caesars Windsor have donated an AMAZING item to be given away at the event (probably through a silent auction). For now we can say it is an incredible piece of memorabilia autographed by an outstanding Canadian band. When details are released to the public we will post it here.

The bands will be judged by a roster of Canadian music professionals including Dennis Ullman. Locals will remember Ullman as the drummer from Windsor’s Icy Redd band, known for their versatile style that features the top hits of today along with the very best classic tunes from the past. Ullman has worked as a freelance performer, educator and music festival adjudicator for over 30 years. Having Dennis on board as a Rock for Dimes Windsor judge will be a treat for local fans of Icy Redd.

Update: Fans of Windsor’s very own world famous band, Tea Party, will be happy to know that drummer Jeff Burrows will also be in attendance to judge the event! Joining him will be John Gillies ( Film-Maker, photographer and owner of Iron Street Studio in Windsor, Detroit) & Tim Trombley (Director of Entertainment at Caesars Windsor).

Bands who participate can win great prizes including – top band gets to perform at the Cork and Fork Festival in July – on the riverfront in Windsor. A festival that attracts over 20,000 people annually. If your band would like to participate contact Dennis Ullman.