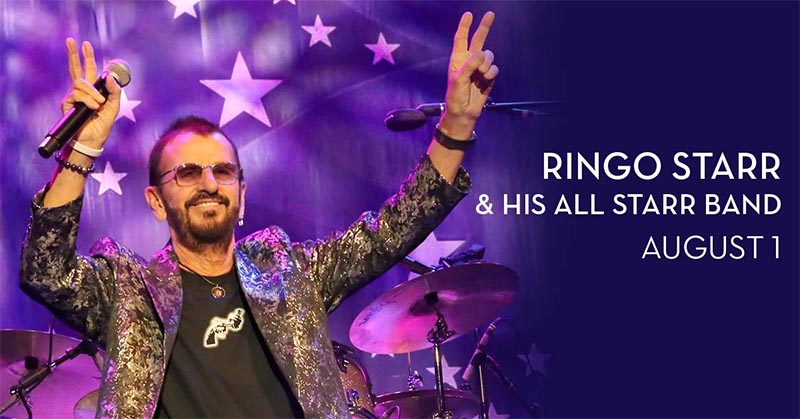 Ringo Starr and His All Starr Band featuring some of the biggest names in music and celebrating their 30th anniversary will perform live on The Colosseum stage at Caesars Windsor on Thursday, August 1, 2019. This is the tours only Canadian stop!

Steve Lukather – Founding member of Toto and 5 time Grammy award winner, including Record of the Year and Album of the Year.

Gregg Rolie – Inducted to The Rock and Roll Hall of Fame twice, both as a member of Santana and Journey.

Hamish Stuart – Member of Average White Band, he is also the former bass and guitar player for Paul McCartney’s band.

Gregg Bissonette – Known as one of the most versatile musicians in the business; Bissonette has played with Toto, Santana, The Bee Gees and more.

Ringo Starr and His All Starr Band tours began in 1989 when he assembled his first band of rock legends. With revolving members over the years, Ringo found consistent success as a live act. “I got asked if I’d be interested in putting a band together.” Ringo would later recount. “I had been thinking the same thing, and so I went through my phone book, rang up a few friends and asked them if they’d like to have fun in the summer.” Fans will enjoy an evening of rock n’ roll hits, including Yellow Submarine, Black Magic Woman, Rosanna, Don’t Pass Me By and more!

Since beginning his career with The Beatles in the 1960s, multi-Grammy award winning legend Ringo has been one of the world’s brightest musical luminaries. A prolific singer, songwriter, drummer, collaborator, and producer – he has released 19 solo studio albums to date. Drawing inspiration from classic blues, soul, country, honky-tonk and rock ‘n’ roll, he continues to play an important recording, touring, and unofficial mentoring role in modern music.

Not only was he a member of one of the biggest bands in musical history, Starr’s solo career of nearly 50 years produced dozens of hits. In 1971, he began his unprecedented run as the first solo Beatle to score seven consecutive Top 10 singles, starting with “It Don’t Come Easy” and followed by “Back Off Boogaloo”, “Photograph” and “You’re Sixteen (You’re Beautiful And You’re Mine)”. Dozens of successful record releases and collaborations followed, including Ringo and His All Starr Band: The Anthology, So Far and Y NOT on which he performed songs with Paul McCartney and Ben Harper.

Don’t miss your chance to see Ringo Starr and His All Starr Band live at Caesars Windsor!

Tickets start at $43 Canadian and go on sale at noon EST on Friday, January 25th.

For more information or to purchase tickets visit https://www.caesars.com/caesars-windsor/shows/ringo-starr-and-his-all-starr-band