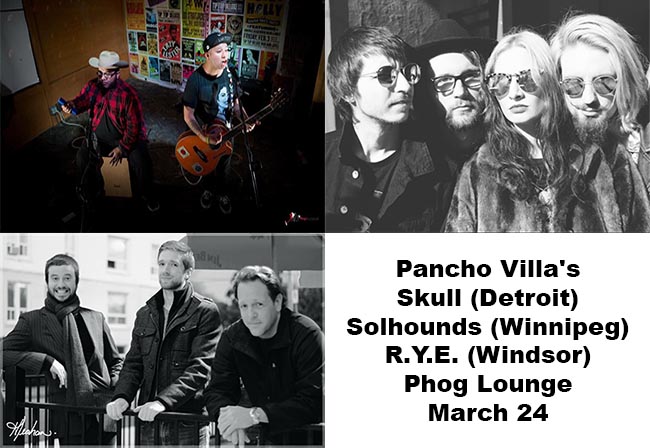 Pancho Villa’s Skull, Solhounds, and R.Y.E. are set to rock Phog Lounge on Saturday, March 24, 2018. To call this live music experience eclectic would be an understatement!

Pancho Villa’s Skull is a unique fusion of traditional Mariachi music with Punk rock attitude. Tino Ybarra founded the band in 2011 by drawing from his Mexican heritage to create what he calls Mariachi punk. The band became a brother duo act when Rolando Ybarra joined in 2016. The band’s name was inspired by Mexican Revolutionary general Pancho Villa, whose skull was stolen from his grave in 1926.

Heavy-metal grunge rockers, Solhounds, deliver a gritty, gut-ripping, brand of stoner rock. The combatant energy this band radiates on stage is one you can’t dismiss. Solhounds drives a movement of equality and empowerment; front woman Elise Roller seizes the crowd with unapologetic lyrics and guttural, smoky vocals. The band delivers songs of the underestimated and the under-appreciated, breaking free from the ideas of right-wing prejudice and misogyny. The band has just kicked off their Eastern Canada tour to celebrate the release of their two fierce new tracks. ‘Side A: Body Bandit’ & ‘Side Be: A Man (I Taught Him)’, which speak to the current feminist movement of equality and empowerment.

Local rockers R.Y.E., from Windsor, Ontario, is made up of Ryan Yoker (Guitar/ Vocals), Steve St.Germain (Bass) and Chris Chamberlain (Drums/Backing Vocals). Their sound channels the psychedelic, Mod and Blues styles of the 60’s combined with a modern day original feel. This is one incredible top form band when performing.

This is going to be one incredible night of live entertainment!