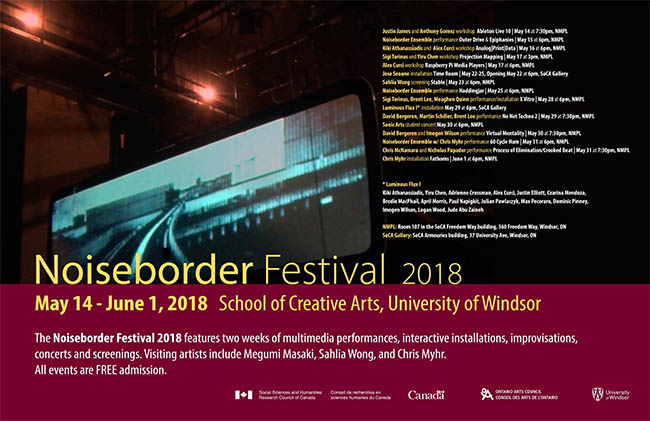 The University of Windsor School of Creative Arts annual Noiseborder Festival takes place at the Noiseborder Multimedia Performance Lab and SoCA Armouries building in downtown Windsor on May 14 to June 1, 2018.

Most events are short with lots of opportunity for discussion and socializing.

All events are free admission.

All events take place in either one of these two locations:

Alex Curci and Kiki Athanassiadis explore the potential of using p5.js – a JavaScript library tool for artists – as a way to play with and translate analog aspects of the printmaking shop and print processes.

This workshop explores mapping video projections on physical surfaces, moving away from the traditional confines of the square screen to sculptures and architecture/building facades. The goal of the workshop is to create several projection mapping installations that will be shown in the exhibition Luminous Flux I in the SoCA gallery on May 29.

This workshop demonstrates the use of Raspberry Pi microcomputers as Media Players for audiovisual installations.

José Seoane’s TIME ROOM is a video installation based on ideas around time, not in the conventional sense regarding measurement and linearity, but as a symbolic element in our lives occupying “space.” Official opening on May 22 at 6pm.

Haddingjar (2016) is an 11-minute work for chamber ensemble and live electronics with optional interactive video created by Brent Lee. Commissioned by the Calgary-based Rubbing Stone Ensemble, this performance will be an Ontario premiere. The ensemble will play the work twice with an introduction from the composer.

X Vitro is an intricate interactive environment created by Sigi Torinus and Brent Lee that is populated by physical objects (glass speakers/projection surfaces) that require consideration of the mapping and navigation of space by both musician and gallery visitor. For this first presentation, Meaghen Quinn will perform the installation in the new Noiseborder Multimedia Performance Lab.

An audio video collaborative improvisation featuring Imogen Wilson and David Bergeron. The improvisation will explore the re-contextualization and recycling of found audio and video.

The Noiseborder Festival welcomes visiting artist Chris Myhr for a performance of his 60 Cycle Hum, an audiovisual performance featuring vocalists drawing 60 breaths, and with each exhalation humming a pitch of 60 hertz (i.e. frequency of North American electrical supply). When each performer has hummed through 60 breaths, the performance is over. Overlapping lissajous figures of the overall composition are projected within the space.

Noiseborder Ensemble colleagues Chris McNamara and Nicholas Papador present their work-in-progress Process of Elimination/Crooked Beat, a project that explores the music and visuals of the post-punk era.

The final event of the Noiseborder Festival 2018 is an installation of Chris Myhr’s audiovisual composition Fathoms: the Weight of Smoke. This work features video footage of debris clouds hovering above the Atlantic seafloor, together with abstracted motion-graphic animation of sea-faring artifacts (i.e. mariners’ pipes). Sound design comprised of ambient recordings from the spaces within various containers recovered from these underwater sites (i.e. ceramic vessels, bottles, artillery shells). Part of a body of work entitled Point-Line-Intersection which examines the interrelationships between culture and natural water systems. Produced through support from the Canada Council.

The Noiseborder Multimedia Performance Lab (NMPL) is a facility at the University of Windsor in Ontario, Canada dedicated to research and creation involving sound, light, and moving images. Since its inception in 2010, the NMPL has hosted artists and researchers from Canada, the United States, and Europe. Established with the support of the Canadian Foundation for Innovation and the Ontario Ministry of Research and Innovation, the NMPL supports research/creation projects undertaken by University of Windsor faculty and advanced students, as well as, workshops and performances by local and visiting artists.

The co-directors of the NMPL are Prof. Sigi Torinus and Dr. Brent Lee, University of Windsor

Pianist Megami Masaki is professor of piano at Brandon University

Award-winning Canadian pianist Megumi Masaki has established herself as an international artist renowned for her warmth and rapport with audiences and her superb musicianship. Her multi-faceted career as acclaimed soloist, chamber musician and pedagogue has taken her across Canada, the USA, Europe and Asia. Megumi is a leading interpreter of contemporary music. She specializes in exploring how sound, image and movement can be integrated in live performances of multimedia works. Megumi frequently collaborates with composers, visual artists, writers and choreographers on interdisciplinary projects involving new technologies to enhance the dynamic interaction between creator and performer. She has commissioned numerous works and has premiered over 70 works worldwide.

Megumi is the Artistic Director of the Eckhardt-Gramatté National Music Competition, a member of the interdisciplinary Noiseborder Ensemble and Slingshot-Kidõ, and teaches piano and chamber music at the Casalmaggiore International Festival Italy. Megumi is Professor of Piano, director of the New Music Ensemble and New Music Festival at Brandon University. Her success in teaching was recognized with the 2010 Brandon University Alumni Association’s Award for Excellence in Teaching.

An upcoming graduate of Berklee College of Music (Master in Scoring for Film, Television, and Video Games), Sahlia holds a Bachelor of Music in Composition from the University of Toronto and an ARCT Diploma in Piano Performance from the Royal Conservatory of Music, and a Bachelor of Education from the University of Windsor. Sahlia served as music director to the First Hungarian Presbyterian Church, and has appeared as a pianist with the Greater Windsor Concert Band Jazz Ensemble, and the Windsor Essex Youth Choir.

Chris Myhr is an interdisciplinary media artist and curator whose practice engages with sound, photography, the moving image, as well as responsive electronics and installation. His work has been exhibited nationally and internationally.

Recent works have deployed surround-sound and surface-transduction technologies, together with visual programming languages and physical computing in the generation of immersive, site-specific listening environments which address the interconnected relationships between sound, body, and space. Chris is on the McMaster University’s School of the Arts faculty in Hamilton, Ontario.

School of Creative Arts’ Mission: To inspire in students a passion for music, visual arts, sound and film production; empowering them to be creators and critical thinkers, and preparing them for performing arts professions.