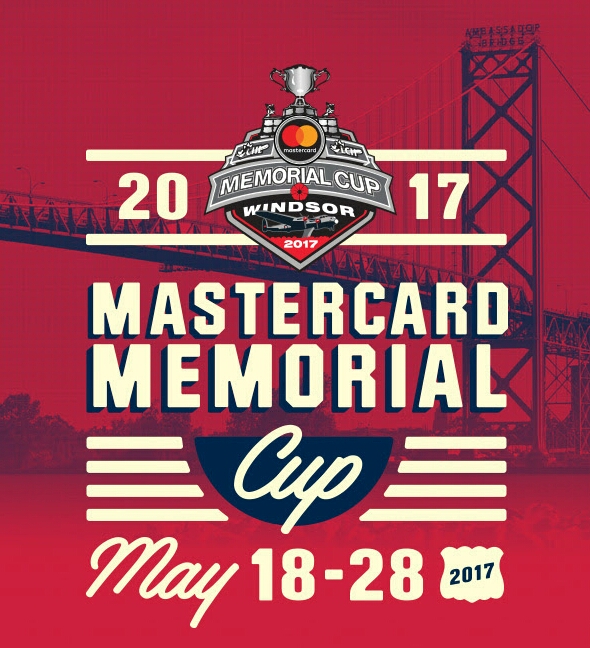 The Windsor Spitfires Hockey Club will host the 99th edition of the Mastercard Memorial Cup at the WFCU Centre in Windsor, Ontario, along with Community Celebrations and events on May 18-28, 2017.

Don’t miss a tournament of champions as the best teams in the CHL fiercely compete for one of the most prestigious trophies in all of hockey, The Memorial Cup.

Fans will enjoy live entertainment, a huge fan zone, community celebrations and more in addition to the exciting round robin hockey tournament.

The celebration will officially kick off May 18th at 3:15pm with the “Opening Banquet”, presented by Collins Barrow, at the St. Clair Centre For The Arts; featuring former Ottawa 67’s goalie and current Toronto Maple Leafs broadcaster Jim Ralph, along with Masters of Ceremony John Fairley (St. Clair College) and Windsor Spitfires legend Adam Graves, who led the team to the 1988 Mastercard Memorial Cup championship final.

Also in attendance will be players, coaches and officials representing the four participating teams, representatives from the Canadian Hockey League, sponsors and community organizers.

The community is invited to a free celebration on Thursday, May 18th: “Witness The Legacy: The Memorial Cup Arrival”. The historic trophy will arrive along the Detroit River from Sarnia on board the Canadian Coast Guard patrol vessel Private Robertson V.C before docking at Dieppe Gardens at 6:00pm. The Cup will be off-loaded at 6:30pm to embark on a military led parade to the Cenotaph on University Avenue.

Accompanied by military personnel, the Memorial Cup will be paraded from Dieppe Park up Ouellette Avenue to the Essex County War Memorial in City Hall Square for a special ceremony. The Memorial Cup Arrival Ceremonies, a free family-oriented event, will start at 7:00pm. Following that, the trophy will be on display inside Windsor City Hall for public viewing and photographs until 9:00pm.

The people of Windsor & Essex County can look forward to seeing the Memorial Cup right in their own backyard. City of Windsor Mayor Drew Dilkens has announced the locations of a “10 Wards in 10 Days” tour that will see the Memorial Cup travel across the region so residents can experience junior hockey’s most coveted prize up close.

The Memorial Cup will also be appearing at sporting events like a volleyball tournament featuring the Memorial Cup Community Activation Team, a Windsor Express game and an Amherstburg Admirals game, along with local landmarks like Jack Miner’s Bird Sanctuary and Point Pelee National Park.

The Memorial Cup will also be at Windsor’s riverfront during the City of Windsor’s 125th Birthday Celebrations and Annual Mayors Walk.

Each location will feature fan giveaways, opportunities to enter contests and the chance to take photos with the trophy. Information about the tournament and its history will also be available at each ward tour stop.

For the full schedule of locations and times visit http://mastercardmemorialcup.ca/community-tour/

Mastercard Memorial Cup events will be hosted in the three community rinks of the WFCU Centre just steps away from all of the action on the ice.

The “Mopar Fan Zone” will be located in the Greenshield Rink and is fun for all ages. Come check out displays from many of our local and national partners, grab any CHL merchandise you might be looking for, or test your hockey skills with a variety of interactive challenges. The Mopar Fan Zone is open daily at 9:30am and is free to the public.

The Corporal A.P. Grenon and Canadian Veterans Memorial rinks will appropriately house a number of military-themed displays derived locally from the Canadian Historical Aircraft Association and Southern Ontario Military Muster. Riverside Minor Hockey will be showcased and the Hockey Hall of Fame will also have a miniature museum with a collection of recognizable trophies on display.

These exhibits will operate from May 19th to May 28th. There is no admission charge and you don’t need a 2017 Mastercard Memorial Cup game ticket to enter (entry to the Molson Hockey House is restricted to ages 19 and over).

Some of the biggest names in the hockey world are set to play in the CHL Alumni Game as part of the events surrounding the 2017 Mastercard Memorial Cup.

Steven Stamkos, Aaron Ekblad, Jeff Skinner, Taylor Hall, Adam Henrique and many more will take to the ice for two twenty-minute periods on Saturday, May 27th at 2pm in the main bowl at the WFCU Centre.

Reserved tickets are $15.00+HST and are available at www.wfcu-centre.com. Partial proceeds will benefit a legacy project in association with Smilezone, the charity founded by Adam Graves and Scott Bachly dedicated to putting smiles on the faces of children facing health challenges.

All nine games of the 2017 Mastercard Memorial Cup will begin at 7:00pm Eastern.

The action begins on Friday May 19 when the host Windsor Spitfires open against the QMJHL champions. The Mastercard Memorial Cup Championship Final is slated for Sunday May 28 at 7:00pm.

Great tickets have been released by the CHL for sale to the general public.

Seats can be selected and purchased at the WFCU Centre’s online box office.

About The MasterCard Memorial Cup Round Robin Format

Since the round-robin format of the event was introduced in 1972, the Ontario Hockey League has won a total of 16 Mastercard Memorial Cup championships including last season in Red Deer when the London Knights captured their second title in franchise history with a 3-2 overtime win over the Rouyn-Noranda Huskies. The host Windsor Spitfires will be competing for their third Mastercard Memorial Cup title in franchise history after winning back-to-back championships in 2009 and 2010.