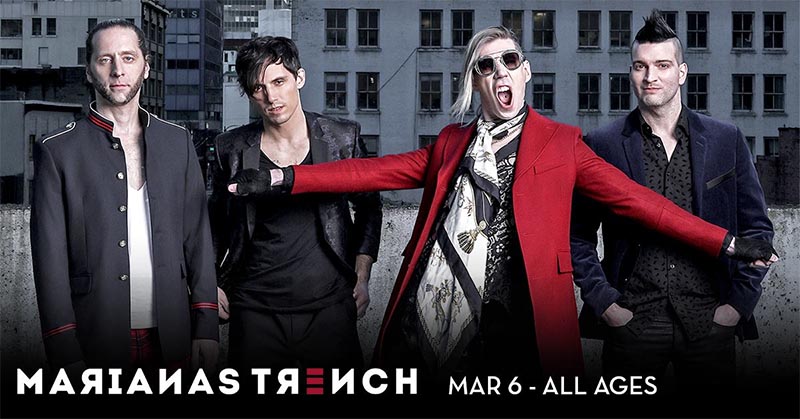 Multi-double platinum selling, progressive pop band, Marianas Trench will kick off their Suspending Gravity Canadian tour in Windsor, Ontario, at Caesars Windsor on Wednesday, March 6, 2019, with an all ages show.

The 15-date tour, which wraps up on March 29 in Vancouver, will be held at venues that will give the fans more of an up-close-and personal live experience, and feature the powerhouse Vancouver quartet’s signature high-energy performance, while showcasing material from their forthcoming studio album “Phantoms” in addition to hits from their previous double platinum and gold-selling albums.

“After months of hibernating in the studio, it’s time to get back on stage in front of our fans and share some new music with the world. We couldn’t be more excited. Time to dust off the shiny pants and stretch out the glutes, the Trench is back,” said lead guitarist Matt Webb.

Last November, the band released their latest single “I Knew You When” (604 Records), an upfront take on moving on from a former relationship and the lingering memories that remain. “I Knew You When” is the perfect combination of fresh pop-rock beats that blend seamlessly with lead singer, Josh Ramsay’s incredible vocals.

“I often find pop dance tracks don’t really have much lyrical substance. To quote Dave Grohl, “It’s catchy and fun to dance to, but if your favorite song is about your butt, you have a problem.” I wanted to make a fun pop dance track that actually meant something to me, personally,” added Ramsay.

“This is about long term, messy, real life love. Love with consequence. Not about drunken lust, or doing shots in a bar, or “living life for just tonight,” but the kind of real-life relationship that takes a decade to build, through ups and downs. If I’ve learned one thing in my life as a performer it’s this; if you’re going to sing a song every night for the rest of your career, you better mean it – and I do.”

Joining Marianas Trench on tour is platinum-certified, break out Canadian duo Elijah Woods x Jamie Fine. EWxJF is a delicate marriage of exploratory musical styles and masterful emotional play. The duo purposefully breaches the boundaries of pop music touching on many influences including Hip-Hop and R&B that consistently shake up their sound.

Over the last decade, Marianas Trench has consistently raised the musical bar both in the studio and via their explosive live shows. They have built their name on relentless touring across Canada and globally, headlining tours in the USA, Australia, New Zealand and Europe.

Since their 2006 debut, Fix Me, Marianas Trench have had two certified, double platinum-selling records (Masterpiece Theatre, Ever After) and two certified gold-selling albums with chart topping hits including ‘Rhythm Of Your Heart,’ ‘Haven’t Had Enough,’ and ‘Who Do You Love.’ Along with double platinum and gold digital singles, the band has also garnered multiple SOCAN and MMVA Awards, number 1 videos on MuchMusic, JUNO Award nominations and won the 2013 JUNO Award for Group of the Year. Ramsay also received a GRAMMY nomination in 2013 for co-writing and producing Carly Rae Jepsen’s international breakthrough smash and certified US diamond selling single “Call Me Maybe.”