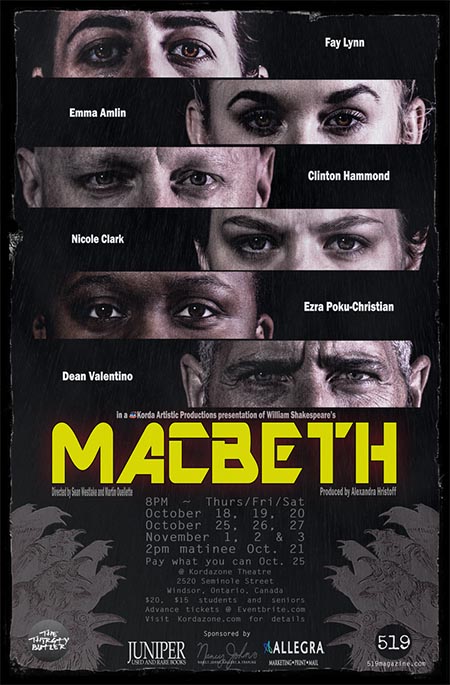 Shakespeare’s unforgettable tragedy – thought to have been first performed in 1606 – dramatizes the damaging physical and psychological effects of political ambition on those who seek power for its own sake. A brave Scottish general named Macbeth receives a prophecy from a trio of witches that one day he will become King of Scotland. Consumed by ambition and spurred to action by his wife, Macbeth commits crime after crime to claim the throne and protect himself from enmity and suspicion becoming a tyrannical ruler. The bloodbath and consequent civil war take Macbeth and Lady Macbeth into the realms of madness and death. In the backstage world of theatre, some believe that the play is cursed, and will not mention its title aloud, referring to it instead as The Scottish Play. Over the course of many centuries, the play has attracted some of the most renowned actors to the roles of Macbeth and Lady Macbeth. It has been adapted to film, television, opera, novels, comics, and other media. Korda takes on The Scottish Play under the direction of Jeff Marontate, whose past Korda presentations of Shakespeare’s works include Much Ado About Nothing, A Midsummer Night’s Dream, A Comedy of Errors, Titus Andronicus, and As You Like It.

“… taut, thrilling and, at times, terrifying.” – The Globe and Mail.

“… not for the faint of heart… in a country where even now we are debating how much we as a nation should engage in the world… Macbeth offers a chilling narrative of how this influence, and the siren call of power, can be used for evil.” – DC Metro Theatre Arts.

Call 519-562-3394 to reserve tickets in advance.
Tickets will be available at the door a half hour before each show time.