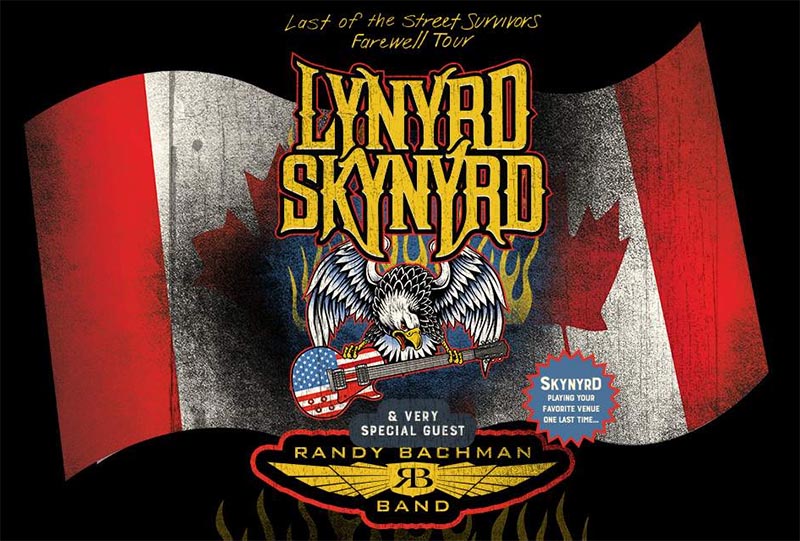 Legendary Southern Rock icon Lynyrd Skynyrd brings his Last of The Street Survivors Farewell Tour with special guest Randy Bachman of The Guess Who to The Colosseum stage at Caesars Windsor on Sunday, March 3, 2018.

After a career of more than 40 years, Lynyrd Skynyrd will embark on its final Last Of The Street Survivors Farewell Tour with Very Special Guest Randy Bachman giving fans one last memorable night of classic American Rock-and-Roll.

The Last of the Street Survivors Farewell Tour marks a big moment for the three generation of fans, as the band has been consistently touring since it took a decade off in 1977. The iconic group is widely known for their live performances that usually include their beloved, elongated version of “Free Bird,” most often played at the end of their set, and their live albums including their multi-Platinum certified One More from the Road.

With a catalog of over 60 albums, sales beyond 30 million worldwide and their beloved classic American rock anthem “Sweet Home Alabama” having sold over two million ringtones, Rock & Roll Hall of Famers Lynyrd Skynyrd remains a cultural icon that appeals to multiple generations.

Lynyrd Skynyrd is a band of today, carrying a steely mantle forged in the sweaty confines of the Hell House in Jacksonville decades earlier. Their biggest hits and iconic rock hit songs include: “Saturday Night Special,” “What’s Your Name,” “Gimme Three Steps” and so many more.

Tickets start at $65.50 Canadian and go on sale at noon EST on Sunday, November 18th.

For more information or to purchase tickets please visit https://www.caesars.com/caesars-windsor/shows/lynyrd-skynyrd