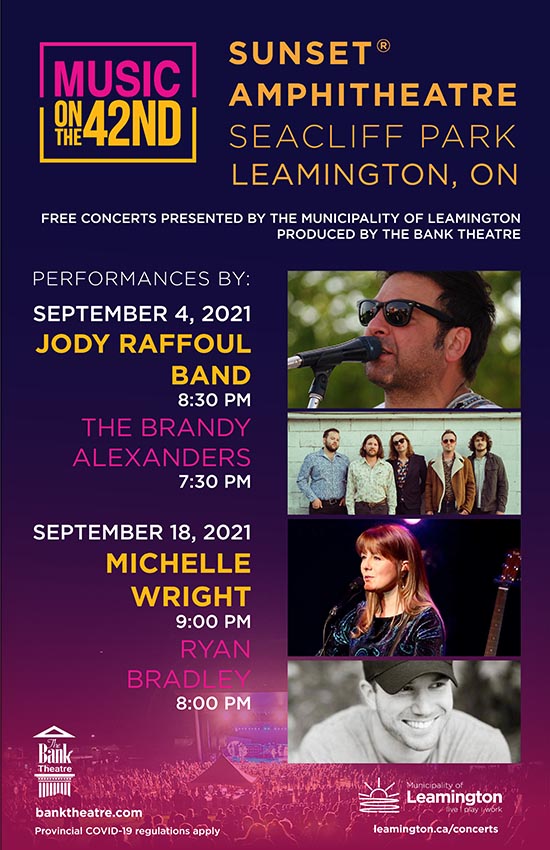 The Leamington Music Onthe42 Summer Concert Series, presented by the Municipality of Leamington, in partnership with The Bank Theatre, returns for a second season featuring several free all ages shows at the new Seacliff Park Amphitheater on June 22, 27, July 1, 13, 27, August 10, 17, & 24, 2019.

Bring a blanket or a lawnchair, a water bottle to refill at the hydration station, pack a picnic, and enjoy these free all-ages concerts.

“This season at the Seacliff Park Amphitheatre is even more dynamic than the last,” said Mayor Hilda McDonald. “We are always striving to put on engaging events for our residents and visitors alike, making Leamington the place to be for waterfront musical entertainment.”

“Music is a language the transcends cultures and brings communities together through shared experiences,” said Peter Neufeld, Chief Administrative Officer. “Leamington’s diversity continues to be its strength, and we are celebrating that through our concert series.”

This show is also an album release concert and celebration for Jody Raffoul’s 6th Studio Album “BaMORé”
Rock along with local legend Jody Raffoul and The Brandy Alexanders alongside the incredible Canada Day fireworks display!

Another first for Leamington is original singer-songwriter Sarah Smith who will be performing with special guest Carly Thomas at Leamington’s first Pride Concert as a Leamington addition to Windsor’s successful Pride Festival.

Explore the world of Electronic Dance Music at this exciting electronic music festival!

New this year is the Electronic Dance Music (EDM) concert hosted by the Mayor’s Youth Advisory Committee, which will feature electronic dance music with stylings from Leamington’s Josh Karmin and DJ Kirzy as well as EDM favourites Alley Kay, and TWINNS. This style of music will be a first for the Amphitheatre and is aimed at showcasing music that appeals to local youth.

Leamington will see the return of the Windsor Symphony Orchestra again this year!

In the event of severe inclement weather, a concert may need to be cancelled. Should this happen, the community at large will be informed via social media: 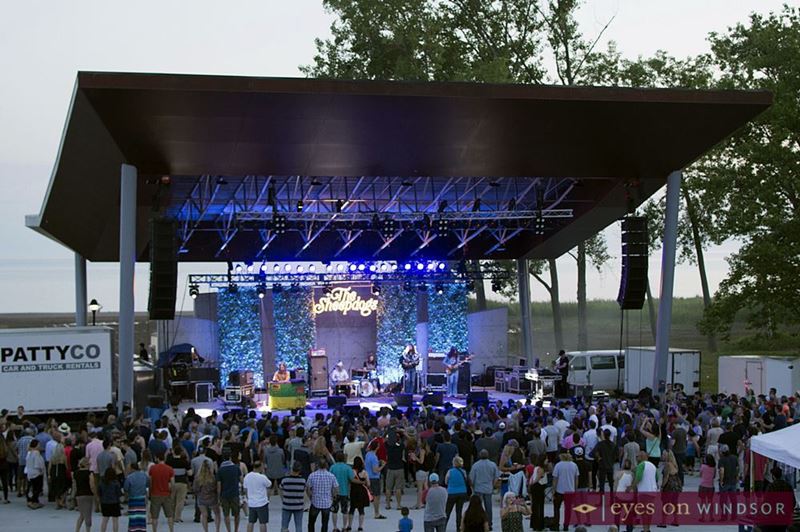 People gather around the Seacliff Park Amphitheatre in Leamington, Ontario, as The Sheepdogs perform and kick off the town’s Music On The 42 free outdoor Summer Concert Series, on June 16, 2018. Photo by Eric Bonnici / Eyes On Windsor.