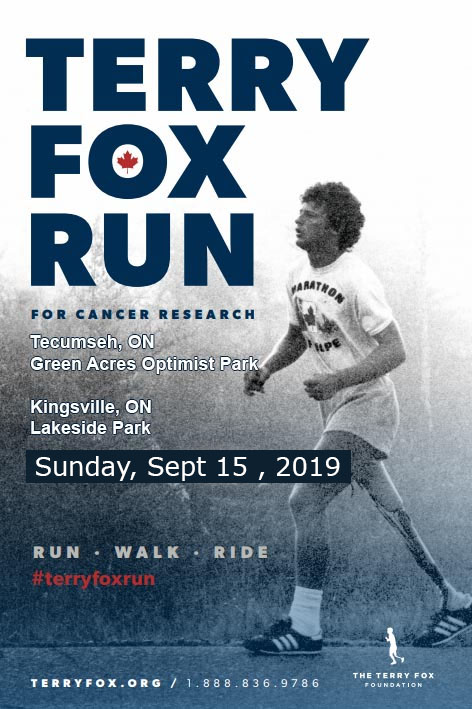 Celebrate the legacy of Terry Fox and his place in Canadian history during this fun annual event.

Participants meet and register at the large tent in Lakeside Park near the Pavilion. The route accommodates walkers, runners, joggers, urban polers, and cyclists of all ages and fitness levels (this is a wheelchair accessible event). The five kilometer route includes one lap of the park at the start and end of the run and then heads out Cull Avenue to Heritage, the Greenway, Division and back to Lakeside Park. There will also be a shorter 2km family route. Wear your Terry Fox T-shirt!

Remember to bring a water bottle.

There is no entry fee or minimum pledge to particpate. However, participants are asked to fundraise or make a donation. You can raise funds online at secure.terryfox.ca, use a pledge sheet or make a donation at the event.

Terry Fox is one of Canada’s greatest heroes. He lost part of his left leg to bone cancer at 18 years old back in 1977. Terry’s courage shined and inspired the entire nation when he decided to run across Canada in what he called the “Marathon of Hope” to raise awareness and money for cancer research. In the summer of 1980 Terry began his journey on his good right leg and artificial left leg starting at the Atlantic Ocean in St. John’s, Newfoundland. After running an average of 42 kilometers per day across 6 provinces in 143 days totaling 5,373 kilometres Terry had to end his marathon in Thunder Bay, Ontario. His cancer had spread to his lungs forcing him to stop and undergo treatment. Unfortunately, Terry Fox passed away on June 28, 1981. Terry Fox’s courage, determination and hope inspired the nation and his legacy continues to this day. Every year, millions of people in countries around the world participate in Terry Fox Runs and fundraising events.