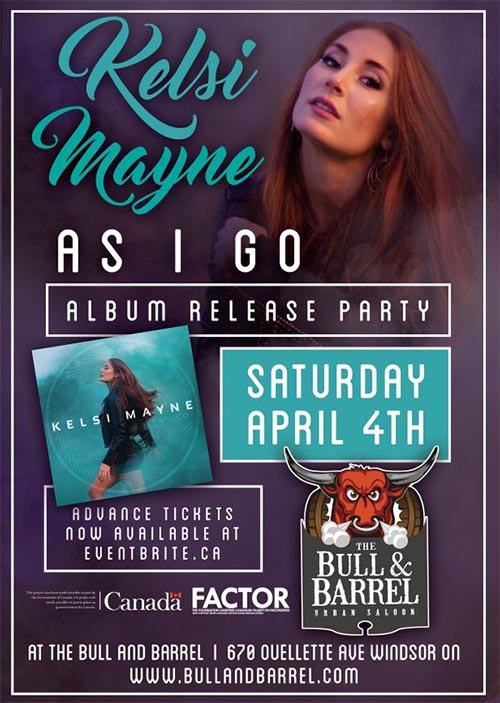 Windsor-native, University of Windsor Lancer alumni, and sensational Country Music artist Kelsi Mayne returns home to debut the release of her first album “As I Go” at The Bull and Barrel Urban Saloon on Saturday, April 4, 2020.

One of three finalists in SiriusXM’s nation-wide “Top of the Country” contest, Kelsi Mayne is bracing for her biggest year yet. Her latest single, “As I Go” hit the airwaves Jan. 31, with the teaser generating 1.2 million TikTok views in 24 hours. The full music video was released on Feb 21.

Kelsi’s previous single, “Takin’ U Home,” has more than 440k Spotify spins, was the #1 independent download on DMDS, and captured the attention of national audiences on Rogers Hometown Hockey Tour, and the Canadian Sports Hall of Fame ceremony on CTV. The song was also used to promote Humane Society adoption programs – a cause close Kelsi’s heart.

Kelsi has played the main stages at some of Canada’s most celebrated music festivals, from Havelock Jamboree, to Boots & Hearts, to the Big Valley Jamboree. And 2019 saw her take to the big screen as the lead in Willa, a Stephen King adaptation still making the rounds on the the film-festival circuit.

Along with her devoted fanbase, known as the #MAYNEtrain, Kelsi has garnered tremendous support from industry mainstays such as FACTOR Canada, SOCAN Foundation, CCMA, CMA Ontario, and the Ontario Arts Council. Soundcheck Entertainment reporter Hendrik Pape predicted, “it won’t be long until Kelsi Mayne becomes a household name across Canada.”

Kelsi currently divides her time between Toronto and Nashville. But a dual-city allegiance is nothing new to her. She grew up in Windsor, Ontario, just within earshot of Detroit. Both locales continue to inspire her blue-collar style, as evidenced in her debut album due March 27, 2020.

Once ranked third in Canada in varsity women’s 60m hurdles, artist Kelsi Mayne (quite literally) may be the fastest-rising independent country artist in Canada.

Tickets are available in advance online though Eventbrite.ca or can be purchased at the door (if not sold out by then).

Windsor native and Canadian Country Music artist Kelsi Mayne smiling as she holds up a copy of her debut album release, As I Go. Photo courtesy of Kelsi Mayne.