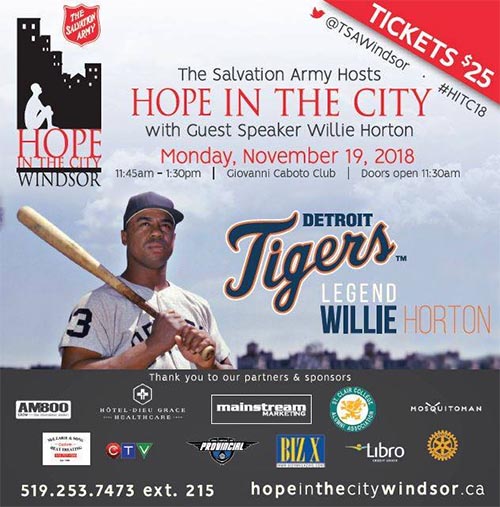 In partnership with the Rotary Club of Windsor (1918), this luncheon event provides an opportunity for attendees to network with like-minded community and business leaders, to learn about the support opportunities available and how they can collaborate with The Salvation Army in bringing vital services to people in need in Windsor and area.

The fourth person in Detroit history to be given their own day, Willie Horton was a legend to the city both on and off the field throughout his fourteen seasons with the Detroit Tigers.

A few seasons after being drafted by the club, Horton put together an impressive rookie campaign and made his first of four All-Star Game appearances. Horton posted double-digit home run totals in 12 regular seasons, with career high 36 home runs in 1968, the year in which the Tigers would defeat the St. Louis Cardinals for a World Series title.

Following his tenure with the Tigers, Horton spent a combined three seasons with various clubs, most notably with the Texas Rangers and Seattle Mariners, before retiring in 1980. Since his retirement, Horton remained close to the game, managing the Navegants del Magallanes of Venezuela, whom he would guide to the Caribbean Series title, and holding various coaching roles with the New York Yankees and Chicago White Sox. He has remained a prominent figure of the Detroit Tigers organization, with his number #23 retired by the club and a Special Assistant to the President and General Manager role, which he currently holds today.

Joining the luncheon as Master of Ceremonies is Jim Crichton.

Jim is Senior News Anchor at CTV in Windsor and a trusted face in local news. Jim has been a member of both Halifax and Windsor Advisory Boards for The Salvation Army.

Tickets are available for $25 each online at Eventbrite.ca

Have questions about Hope in the City Luncheon Windsor 2018? Contact The Salvation Army Windsor at 519-253-7473 or visit http://salvationarmywindsor.ca